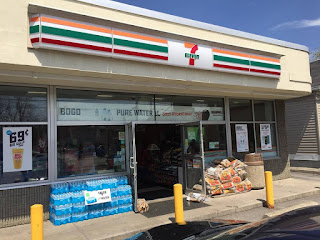 To kick off the release of Deadpool 2, 7-11 decided to doll up it's stores and offer some really cool stuff. Why not? Deadpool is a fun character, and out of every place you can envision him going, 7-11 is the logical choice. Chimi-changas? Burritos? Cheap chicken wings? That's got Deadpool all over it. The perfect spot for a superhero who needs to refuel after decapitating the bad guys while spouting his favorite one liners and breakdancing. 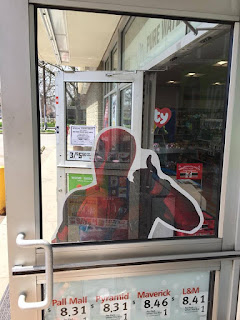 Greeting you as you enter is the Merc With The Mouth. I'm already getting a good feeling about this. How can I not? 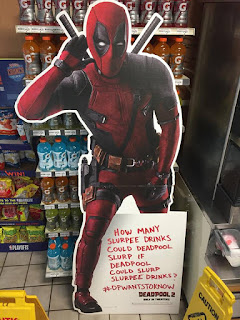 There he is. Deadpool-mania is running wild inside this beloved convenience store. No doubt feeling pumped by the anticipation and electricity in the air both for his movie and the cool items he has to offer you and what he has to offer, is more than you may think. 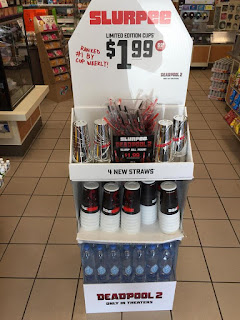 Speaking of which, this display welcomed me as I walked in. Almost immediately I was ready to buy everything I saw. Straws and cups seem to be the main draw for a lot of people and rightfully so. I'll get to those in a moment because I found something equally amazing that I really wanna discuss: 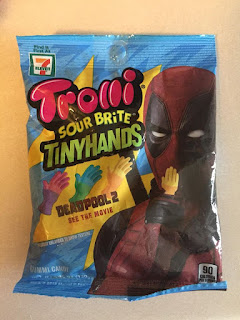 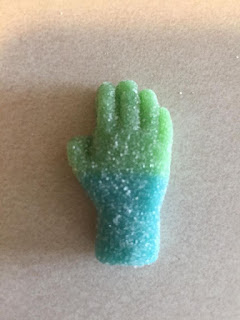 From the fine folks at Trolli Sour Brites, we got Deadpool TinyHands! If you thought Trolli's sour worms were amazing, these are even tastier. They're not as sour as you'd expect and therefore amazing since I'm a wuss and can't handle too much sour, which would please the members of The New Day. The taste is more of a mild sourness, so if you've got reservations on buying these, fear not! If I can handle them, so can you! I've seen a lot of gummies in my life: sharks, bunnies, zombies, Garfield, but never just hands. So this alone is worth the drive to your local 7-11 for the unique novelty factor. 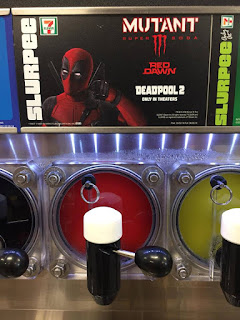 Don't forget to try Deadpool's new Slurpee! "Red Dawn", as it's referred to, this has a cherry flavor and to be honest, I'm not the biggest cherry fan but the fact that it's a Deadpool themed flavor, how in the world was I going to say no? It's the little things that make us happy and despite my disdain for all things cherry, I honestly didn't mind this. I was pretty sweet and I can see how someone would crown this as the new King of Slurpees. Deadpool would be proud. 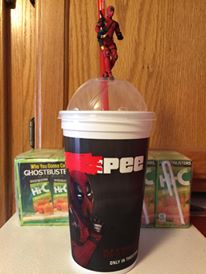 The cups and straws. Because you can't introduce a special, limited edition flavor without offering some sweet cups to go with it! 4 straws and 2 cups are offered, and all are pretty amazing. If I wasn't running out of space in my cupboard, I would throw out all my glasses and cups and just replace them with these. Probably not the best since I'm married to an Italian woman and all our dinners and holidays would look awfully bizarre with her Italian big family drinking out of cups that say "Pee". But, I had to pick up at least ONE cup and straw. And I'm pretty happy with it. 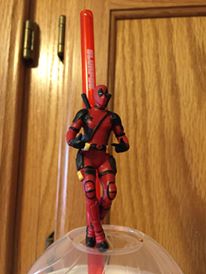 Nothing says "summer" to me like a big tall cup of Coca Cola Slurpee (even though I'm a Pepsi guy.) so to be drinking it out of a straw featuring Deadpool doing the D-X chop makes things even better. I don't mind having a straw with a vulgar figure telling me where it's at in my collection. I can't wait to spend the rest of my summer sipping liquid from this straw and get unusual stares. 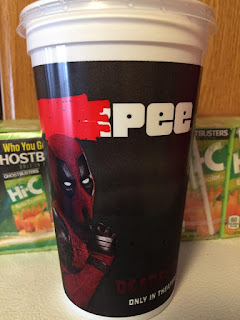 In my opinion, these are 7-11's best cups in years. Why? Other than the fact that it says "PEE", the cups themselves are very reminiscent of 80s/90s promotional cups from various fast food establishments and other venues. Ever been to a sporting event and get a souvenir cup? Yeah, now you see what I'm saying. Remember those Batman Returns cups? Mmmhmmm. Tell me I'm wrong.

The white borders at the top and bottom help drive that nostalgic feel home. In the past few years, whenever anyone does a cup like this, the cups are usually very thin plastic or, if it is much thicker, it's featuring an all over design that literally takes over the entire cup. I don't mind the all over cups that you'd get in a movie theater but there's really something cool about getting an old school promo cup. The thickness of the plastic in these are also very close to that familiar feel. If you were drinking a Coke out of a Dick Tracy cup at McDonalds n 1990, this will send you back to that time almost instantaneously. In fact, I imagine drinking a Diet Cherry Cola will make you truly believe you never left the early 90s.

And in case you thought I was crazy, here's a side by side comparison of an old Hardees Ghostbusters 2 cup and a McDonalds Batman Returns cup: 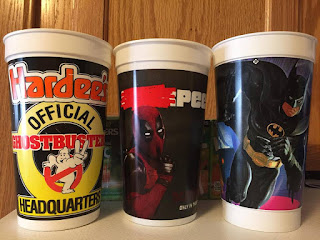 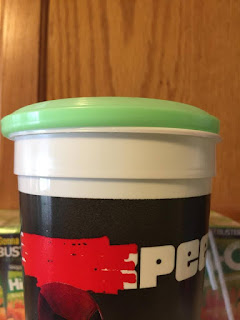 While these cups share the same amount of thickness, much like the height, the width of the cup isn't the same as seen above. Which makes me kinda sad because I would've given anything to drink some orange soda out of a Deadpool Slurpee cup with a glow in the dark Batman Returns lid. But that shouldn't detract you from buying these. You'd be silly not to pick these up! Grab one, or all, I won't judge, and start the summer off right! 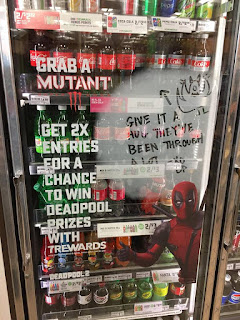 I honestly can't remember the last time 7-11 went all out in terms of promotion like this. I feel like the last time I can truly recall was in 2007 for the Simpsons Movie (also owned by Fox. Hmmm...) when numerous shops were transformed into Kwik-E-Marts. Funny enough, thanks to that promotion, you can still walk in and see "Sprinklelicious Donuts" so maybe those Trolli hands will stick around? Who knows, but one can hope! So check out your nearest Slurpee spot, take it in, because who knows if it'll be another 11 years until we get another fun-filled (and vulgar?) promo like this again. I'd expect this in the late 90s to mid 2000s but not 2018. Just by that thought alone, I can't help but want to visit my local 7-11 every day so I truly never forget just how great this stuff is.

Besides, if you do miss it, how much regret will you have? Don't be like me with Pepsi Holiday Spice, soak this in as much as you can!