It's #WizardWednesday and our pal Ross over at 8-Bit Zombie (who I interviewed years ago about his love of The Wizard!) has unveiled a brand new collection of awesome shirts, a hat and other goodies. By now, if you follow me on any social media platform, you've figured out how much I love these shirts and products due to the incredible passion put into the artwork, themes and the originality that goes into thesm. In fact, alongside Fright-Rags (who offered their own Video Armageddon shirt earlier this year, but seems to have sold out!) and WWE, they're the only shirts I own anymore! And today, I'm happy to share with you some of the coolest products I've seen Ross release. Ladies and gentlemen, 8-Bit Zombie brings you...THE WIZARD... 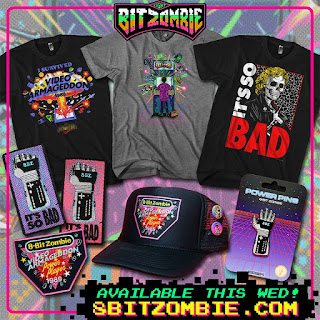 Check out that sweet gear! Patches, a pin, a hat and some sweet new shirts! Let's take a closer look though...

Let's start off with the patches. The purple and pink Power Glove are very reminiscent of the box art and magazine advertisements. I love both of those patches, but there's something very late 80s about that pink patch, that's for sure!

The Video Armageddon Power Patch is super special. For those who may not remember, Nintendo had a "world championship" tournament in 1990, somewhat of a real life Video Armageddon. Every participant was given the patch you see above, as well as a black hat with the same logo: 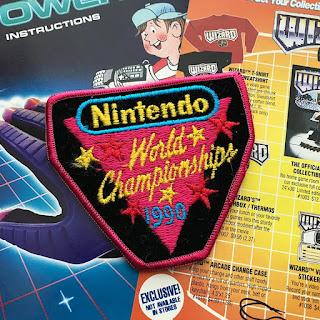 These hats are extremely hard to come by and usually can go for quite a pretty penny. Thankfully, we're getting a patch that is not just an homage to that event but one that makes you an official Video Armageddon "Power Player"! 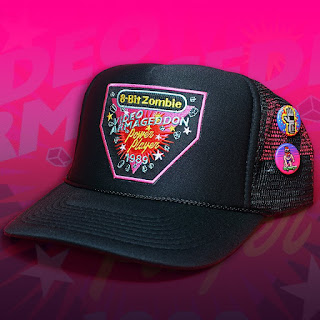 Speaking of which...one of my favorite pieces of this collection is the Power Player hat. We've seen Ross offer plenty of hats before, ranging from My Pet Monster (which if anyone has one they'd like to let go of, let me know!) to Big Trouble In Little China to Robocop and everything in between. But just like the patch, this hat is all about playing with power and recreating that famous NES Championship: 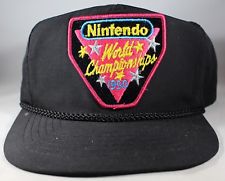 Summer is around the corner and I'm always looking for a new hat to wear out and about and I've decided to go full on retro/neon this summer so the pink and black on this hat make for a perfect accessory to anything I wear. A trucker hat that Hayley's friend Spanky would no doubt approve of while he beats up on Mr. Putnam but also one that Jimmy Woods would wear while defeating his dreaded nemesis Lucas on the big stage, I'd say we got ourselves a winner. Bonus: check out the two buttons on the side, an 8BZ trademark. So you don't just get a sweet hat, but some fun buttons too! Double winner. 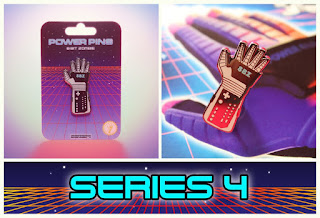 Pins have become quite popular with collectors and the more you have on your vest/bookbag/fanny pack, the cooler you are. Well that's before we got a sweet Power Glove branded with 8BZ, now you're even radder. I've actually got a Power Glove pin already, but it's not as elaborate as this. The detailing of the buttons and the fingers are just right. So if you're a pin collector, definitely pick this up!


Now onto the main event...The shirts... 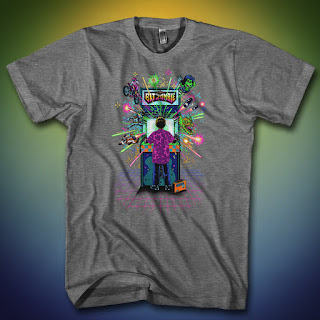 That image looks familiar. You know EXACTLY who's playing that arcade game. It's JIMMY WOOOOODS. With his lunchbox in town, Jimmy seems to be head over heels playing the 8-Bit Zombie game Thrash Or Die, a game you can actually play while you wear this fun shirt! Be aware that this particular shirt is a little softer and smaller than the others, so if you're like me and need a larger shirt, go up a size. 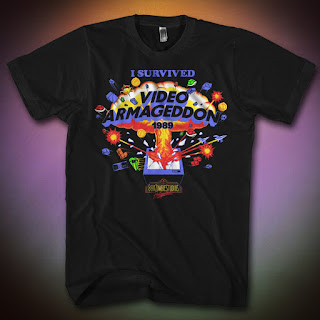 A Video Armageddon shirt to go along with the hat and patch. Because if you're really going to be the ultimate Power Player, you simply must have all the gear. Now, sure, somedays you don't feel like wearing a hat. That's understandable. But with a shirt so soft and so bright, you'll wanna wear THIS all the time! And peep that 8-Bit Zombie logo down below. Look familiar? Of course. How could you not recognize it. Artist and Thrashor designer Matthew Skiff seemed to work in a tip of the (Power Player) hat to Universal Studios, where Video Armageddon took place in The Wizard. Great way to show the world that you're not to be messed with when it comes to playing Super Mario 3.


To top off this amazing collection is LUCAS. Who else but the ultimate jerkface could close this collection out? 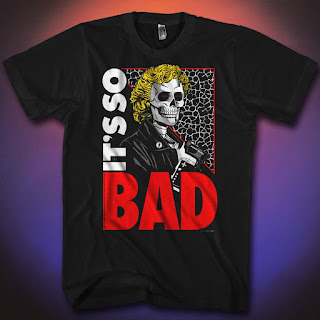 If you're a long time fan of 8BZ, you no doubt remember the original Lucas, which not only paid tribute to the films iconic character and famous "It's So Bad" line, but also Vision Street Wear:

Well, Ross retired that design but decided it was time to give it another go and offer us a SECOND Lucas shirt. Not as in your face, but still maintaining that "VSW" feel. The font, colors and crackling background really make this new shirt stand out. In fact, the first time I saw this shirt, I could've been fooled that it was a shirt from the late 80s. The authenticity of it really makes it quite special. So bad? Not at all, this shirt is just SO RAD!

So if you're a Wizard fan like I am and have been hoping for some fun shirts to add to your collection, head over to 8BitZombie to pick them up. Who knows, maybe you'll find yourself at an arcade and need the right gear to strike fear into your opponent!