on April 20, 2018
Well this big brick of radical Turtle-y goodness just got slammed on my door step. And I am dancing with joy!

A little backstory before I dig into this most bodacious box. The fine folks at Viacom ran a sweet "Spring Cleaning Sweepstakes" over at the official TMNT Facebook page a few weeks ago, seemingly to help promote for the new Rise of the Ninja Turtles cartoon and toyline and to probably get rid of some crazy crap hanging around the office but the biggest prize...An exclusive Rise of the TMNT figure (not released until later this year). I love a good contest, especially when it has toys involved, so I was not going to turn this opportunity down. Bad add the possibility of winning something no one else can own just yet? There's a selfish, competitive side to me that will not rest until I win it. And win I did!

You remember mailing away for those exclusive GI Joe or Star Wars figures as a kid? Remember the excruciating wait from them to arrive? That's what I felt. It was a nail-biting few weeks that would drive me insane. Anytime the mailman left without dropping off this package, was just another failure of a day. But finally...after what felt like decades passing...it arrived... 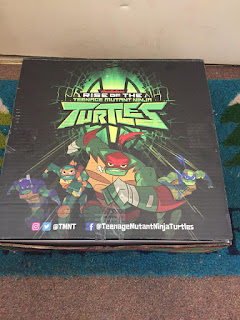 Let's take a look at that box! The new Rise design greets you with the promise of fun and excitement that the new series will no doubt be full of. Bright colors, lots of green and an in-your-face attitude that only the Turtles can deliver. 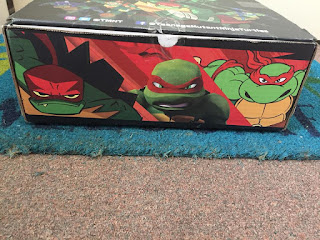 The sides of the box features our fearsome foursome through various inspirations through the years. From 1987 to their 2012 to the newest era. Nice touch!I'm loving it so far! 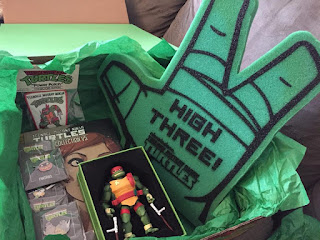 As far as the contents of the box, it's a proverbial treasure chest of pizza-loving, shell-raising goodness. As soon as you open the box you get this kid-like excitement come over you. A little overwhelming, a little emotional, but definitely exciting! Love the green gift wrap protecting da goodz. Nice touch! 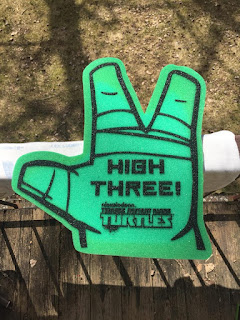 The first item I laid eyes on was a delightful foam hand. "High Three"? Well, don't mind if I do. What better way to give my fellow Turtle fanatics a bodacious greeting than with the official TMNT foam hand? Even Master Splinter would approve. He didn't approve of Vanilla Ice, but a foam hand featuring three fingers? Even he has a good sense of humor! 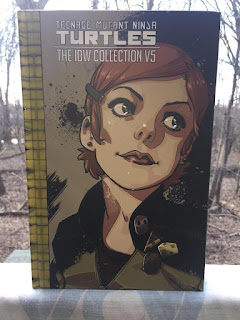 For those rainyday/sick days/days off, I have a gigantic collection of terrific comics to read. This massive collection features several reprinted issues of the great comic series that's been put out by the fine folks at IDW. And it even includes the Ghostbusters/TMNT crossover! Ninja Turtles on their own already are amazing, but add Ghostbusters and you've got the greatest team to hit New York since Roddy Piper and Cowboy Bob Orton. 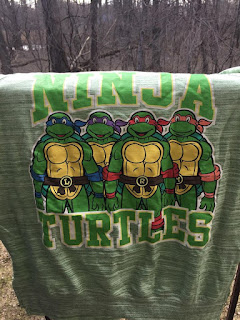 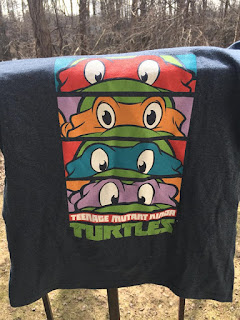 Some shirts! Not my size, but definitely my taste in bright, colorful shirts with giant pizza eating reptiles! Thankfully I do have a couple of friends with awesome children that these could fit better than me. Otherwise, these shirts are absolutely terrific. I actually had my own collection of Turtles shirts as a kid, and they were more in tune with the Eastman designs, but these cartoonish designs just scream being a kid again and I for one adore them for that. 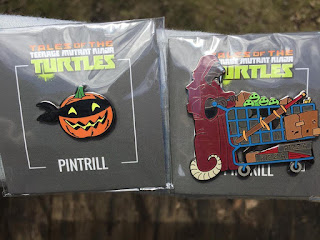 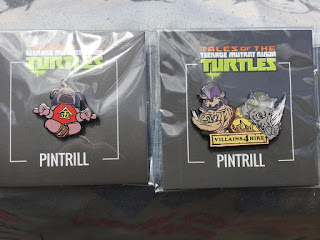 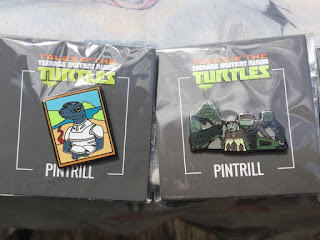 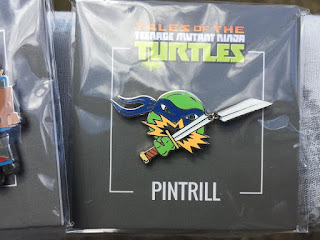 Ahhhh yes. Pins have become the newest and hottest "must have" geek item for all denim vest wearin', bookbag slingin', BrandedInThe80s.com readin', bulletin board havin' cool kid crowd and what's cooler than the Heroes in a Halfshell? TURTLE PINS! These pins were created by the fine folks over at PinTrill in conjunction with the Turtles last season. Each is a unique and a very awesome design detailing some of the insanity of the series. As a pin collector, I fell in love with these instantly but as a Halloween junkie, my eyes zeroed in on that Halloween Turtle. I've been in the Halloween mood for a while and this just intensifies it even more. It's not just a pin suitable for the fall season but all year round when you're feeling Halloween withdrawals.

Also: SPLINTER WITH BABY TURTLES IN A SHOPPING CART COME ON NOW. 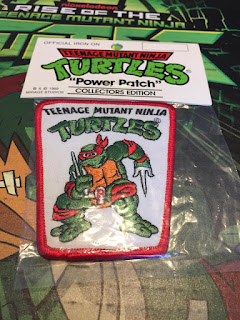 Well now! A special "Power Patch" from 1989! I'm pretty convinced that the staff at Viacom are huge Ninja Turtles fans, because this isn't exactly the item you can just go down the street to the old deli and find mountains of. Well, maybe in NYC you can. I tend to remember my buddy Matt of DinoDrac finding ancient Hi-C at his hometown deli. Be that is at it may, if those radical pins aren't up your alley and you don't wish to put too many holes in your clothes, a patch can be a reasonable compromise, no? Now, I'm kind of afraid to open this and unleash the amazing power it welds. I'm just not sure I'm mature enough to handle it. But, when I do, I'm going to look awesome. Especially when it rests next to my 8-Bit Zombie Slime Pit patch. 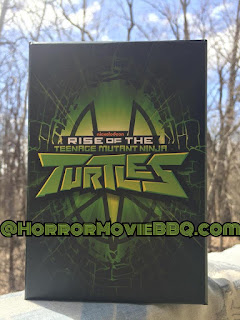 I cannot state how amazing this is. Presenting the NEW leader of the Ninja Turtles...RAPH: 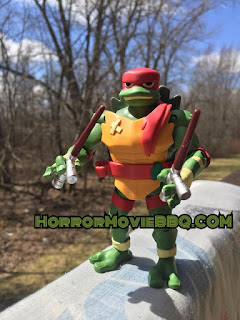 Not due out until later in the late summer/early fall, these new Rise of the TMNT figures look to be some of the best yet. If Raph is any indication, than the rest of the line is going to be absolutely bonkers. 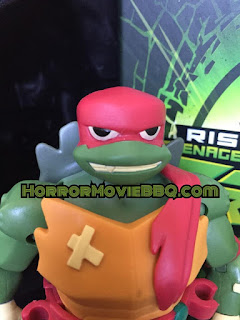 The figure I received, which came in it's own special collectors box show above, is absolutely incredible. The bright colors, the new design of his headwear and the new shell, his new weapons are all pretty much what you'd want them to be. Man, if I were a kid and I was caught between a new Funko Pop and one of these, I'd throw the Pop on the ground and walk off with a new Turtle. A lot of fans have voiced their concern over the new design but to me, I see nothing offensive. I only see a new coat of paint applied to a character that's gone through multiple incarnations and redesigns for over 34 years. You gotta try something new and I'm totally putting my faith into this new series just as I had with the 2003 and the 2012 series. If you're gonna try to take the Turtles in a new direction, why not turn them into full blown superheroes? It makes sense to me and trust me, there's not a lot in this world that does make sense to me. 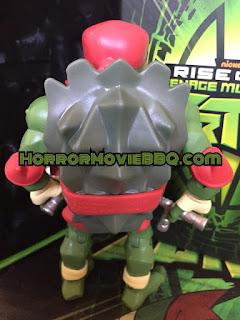 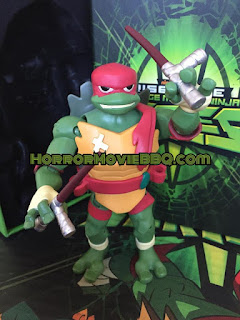 The Turtles have always been pretty groundbreaking with their figures. The play-ability and articulation of the group has always been important to the fanbase and those who love them. And if you're a Ninja, you have to be pretty flexible. For this new line to have such a huge difference in detail and a new look is very important. You can't sell the same wallpaper over and over again, you have to be willing to change it up.

And change it up they did. I would definitely encourage and implore everyone to give this a chance when they come out in full force, because I imagine these could be as big if not bigger than the previous series. Besides, you simply can't go wrong with Ninja Turtles!!! I am so appreciative and grateful for winning this great prize pack from the fine folks at Nickelodeon. This has to be one of the neatest and most exciting things I've received in the mail in sometime. Thanks for making this fan very happy! Next time I'm in town, pizza on me!