on March 14, 2018
It's been a while since I've featured WWF Hasbros on the blog, which considering how great they are, makes no sense. I should at least be doing 8 writeups a day on how great they are. Until that happens, we'll have to just spend a few moments looking at some of the finest (and not so finest) mini-superstars, as Lord Alfred Hayes would refer to them as. So bust out that beat up ring, grab some Ecto Cooler and let's check out some of the best figures from a byegone era! 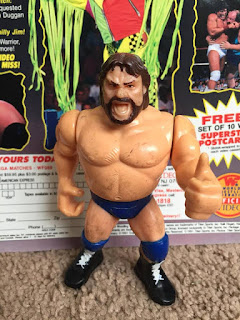 A favorite of so many young kids due to his loud and reckless behavior as well as giving fans the thumbs up as he enters the ring, Jim was one of the biggest WWF superstars in the late 80s/early 90s and the only wrestler to, my knowledge, who walks down to the ring with a giant board to beat up bad guys and still be perceived as a good guy. His action feature of slamming his fist down like your drunk uncle at a picnic and bashing his opponents with his 2x4 (missing here) makes him easy to play with but not as easy to look at. Then again, Jim will be the first to tell you he didn't get through life based off looks. 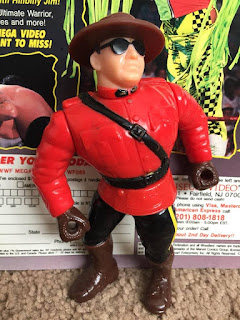 Oh boy, this guy caused some controversy in his day. Originally just a comedy heel character who hit people with a cattle prod and screamed "I ALWAYS GET MY MAN!", The Mountie actually got his biggest amount of heel-heat with the Royal Canadian Mounted Police. Apparently they didn't find the joke as funny and deemed him to be a poor interpretation of their values and demanded he not portray this character when preforming in Canada.

Another figure that came with an accessory that gets lost all too easily but that doesn't stop this figure from being a load of fun and looking great in your collection. Play value isn't there as much due to his awkward hat being in the way of some fun moves but come on, you totally want this figure! Look at how smug he is! It's like he just wants you to beat him up! Just...don't do that to the actual Mounties. They're nice. 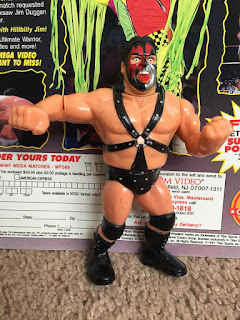 Make no mistake about it, Demolition is my all time favorite tag team. Ax and Smash literally made history by having the longest tag team title run until it was broken by New Day in 2017. They looked like Jason Voorhees and Kiss had two babies and made no apologies about beating their opponents in nasty fashion. Of course, when it was time to wind down, and Ax got sick, WWF brought in a new member of the team: CRUSH! Crush was a little hard to swallow as a fan because we had been accustomed to Ax and Smash for so long. He wasn't as popular as the the classic team but his figure is pretty cool. I'm a fan of the clothesline feature, mainly due to the joint of the elbow that made it easier for the figures to grab a hold of their opponent and slam them down. Crush, as a figure looks great and was actually only available in a two pack with Smash, but did little to bring steam back to the dying team. 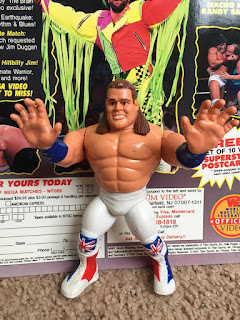 Davey Boy Smith was one of the most impressive specimens in wrestling but also one of the most "hired/fired" records.  Vince McMahon always had a soft spot for Davey, as did the fans, so he brought him in and let him go multiple times. Of course, he always had something new in store for Davey. For a lot of fans, this is the era that defined him. I find it funny that in the early 90s, one of Bulldog's biggest opponents was The Warlord and they both share the same action feature. Which would make it easier to recreate their far from exciting feud. I just wish they could've done something about that Mad Magazine face of his but otherwise, it's a great figure. 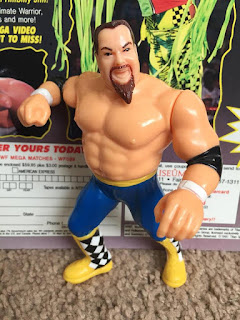 I've got a lot of love for this figure mainly because it makes Jim look like a cereal pitchman. Known as "The Anvil" or simple "a big rhino", Jim was the muscle of the feared Hart Foundation duo as compared to the brains of Bret Hart. This figure depicts him in his later solo career where he wore Hammer pants, yellow boots with what seem to be a checkered pattern from a bicycle helmet, and looked as if he should've been guest starring on a TGIF show. Having that awesome "clothesline" feature and a very puffy stomach with a six-pack, this may be my favorite of this particular lot. Mainly due to his taxi-cab/Hammer pants and crazy grin.


Some of the most interesting figures from the time. Most memorable? Perhaps not, but
still fun nonetheless!