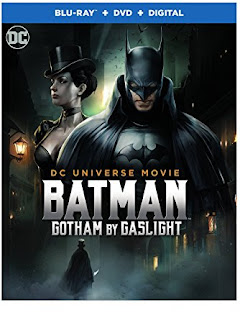 Official Synopsis: " It's Batman vs. Jack the Ripper in an Elseworld's adventure that imagines the Dark Knight over a hundred years ago in a turn-of-the-century Gotham.

Gotham City, at the turn of the century, is experiencing a golden era of discovery and industry as showcased by affluent businessman Bruce Wayne's World Fair. Down in the darkest alleys, there is a killer on the loose. Preying on the city's women, this killer is as precise as he is cruel. As Police Commissioner James Gordon tries to calm the fears of Gotham's citizens over the butcher named Jack the Ripper, the masked vigilante Batman does some detective work of his own, with the help of the sultry and surefooted Selina Kyle. Witness a world in flames as the killer's controlled savagery meets the calculated stealth of the Dark Knight! "

I've long said that DC's Elseworld's tales were made for animated series and this release proves it. Gotham By Gaslight was an Elseworld's story from 1989 by Mike Mignola (of Hellboy fame) and Bryan Augustyn immediately became a cult favorite due to it's unique look at the character of Batman and injecting him into a real life situation that he hadn't quite been in before. Jack The Ripper? Against Batman? Oh, now you've got my attention. The cat and mouse game between Batman and discovering the mysterious identity of the famous serial killer is the real draw of this movie. While you think you know everything about the myth of Jack The Ripper, the twist in this movie will leave you shocked. 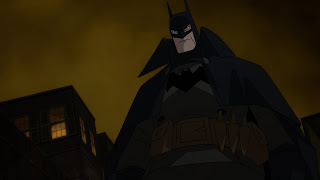 The animation in this movie is once again, superb and exceeds even WB's standards. It seems the anime-inspired style that the company is going in, really works well for all of the DC universe, not just Teen Titans. I'm super happy with what I see in this movie, from a technical POV as well as a fans view.The animation really adds a more fluid yet dark and gritty feel at the same time. The voices of Bruce Greenwood as Batman, Jennifer Carpenter as Catwoman and Scott Patterson as Gordon really help make this feature a faithful adaption. A side note, I was shocked to hear Greenwood's voice, as at first I thought it was legendary Batman voice Kevin Conroy. Yes, the voice sounds that close.


Sometimes Batman's most unusual and unexpected adventures and stories are the most memorable. Long Halloween, Year On, Hush, Red Hood, Death in the Family, Killing Joke are just some of the top favorites and with good reason. The unusual nature of each story and adding a new facet of Batman's characteristics are what makes his legend grow bigger and better.This is certainly one of them. To say Gotham By Gaslight is a must own is an understatement. This is one of the best Batman solo animated films in some time and in fact the best way to start 2018 off!

Your ears don't deceive you...CHRISTIAN SLATER IS IN A DC ANIMATED FILM!