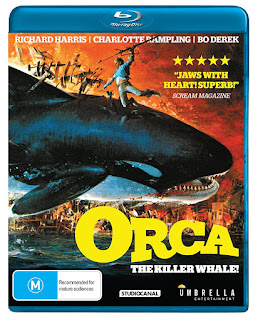 Captain Nolan (Oscar® nominee Richard Harris, Harry Potter and The Philosopher's Stone) is a man of the sea. Brave and headstrong, he is a fisherman who takes up the fight of his life against one of nature’s most fearsome creatures – the killer whale. Orca seeks to avenge the death of his pregnant mate, left murdered in blood red waters. Rising from the ocean, leaving behind it a wake of destruction and mayhem, the deadly marine creature lures his human adversaries to a match of wits and survival in the chilly arctic waters.

When one movie works, studios rush to find a way to cash in on it. Between 1975 to about the early 90s or so, so many people wanted to take a bite out of the big Jaws trend. Any and all creatures of the deep suddenly became the nightmare of any summer going tourist and Orca was no different.

Orca was another entry into the seemingly endless series of Jaws-ripoffs but somehow it stood on it's own completely. What's bigger and deadlier than a great white shark? According to this movie, a killer whale. I mean..."killer" is literally it's name. But while it's the bigger, more deadlier foe, it isn't always the most beloved movie which I hope is no longer the case due to this great release from Umbrella. There is a LOT going on here that can potentially stick with you and leave your jaw on the ground. There's scenes of animal miscarriage, legs being bitten off, a whale trying to kill itself. I've heard these scenes a referenced by others and even in other avenues like Jim Norton but never sat down to watch it. I've been told by several friends that the "whale miscarriage" will stick with me as long as I live and they weren't kidding. It doesn't take long for this movie to kick into high gear.

Now I gotta confess, I've never been a huge Jaws fan but due to the sympathetic nature of the title character, I definitely like this movie more than I do Jaws. Yes, I'm fully aware that's considered pure blasphemy but it's the truth. Whereas Jaws was just kind of a dick, Orca has reason to go after humans. The underlining theme of "humans started this war" really makes me ponder our treatment of animals more and more. I think Orca was very justified in going after the people who killed his mate and exacting revenge. Now, is this movie a little silly? Oh of course it is. Even the dead whale fetus is as ridiculous looking as it gets. But there's still some heart to it. But within the first 10 minutes, you'll end up rooting for Orca but the end of the movie really gets you.


The transfer on this release from Umbrella is absolutely perfect. The crystal clear picture may expose some of the silliness of the movie but it still presents the movie as it should be viewed. Will you want to go out and hug a whale after this? Yes. Will you love this movie and want to watch it again? Yes. Will YOU possibly choose this over Jaws? I mean, I don't know. But I know I love it upon first viewing.