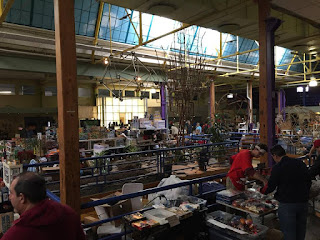 It's time, it's time! The Village Gate Toy Show took place on Sunday December 3rd and I did not hesitate to keep my hunting eyes open for great deals and fun treasures. For the past 3 years, my goals have been more to sell my goods but I've become friends with so many of the dealers and usually that leads to great deals and trades. And this show was absolutely no different. Let's take a look at the goods: 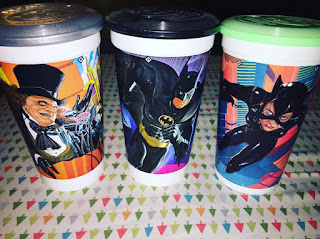 Back in the 90's, McDonalds would offer large cups for their major promotions. Usually a movie, sports team, cartoon, whatever they could spread across both regular items and their happy meals and there was no bigger movie in the summer of 1992 than Batman Returns. One of the big hype machines behind it was McDonalds, who offered these awesome cups along with neat frisbee toppers as the lids.So not only were you getting an amazing illustration of The Penguin giving a gruesome speech, you get a sweet disc to throw around. And if you were lucky, you got the glow-in-the-dark lid. 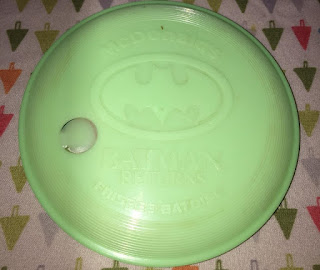 I'm gaga over anything glow-in-the-dark, so I got very excited for it. If you think I didn't request that particular lid at age 9 from the visibly frustrated fry cook, you just don't know me well enough. 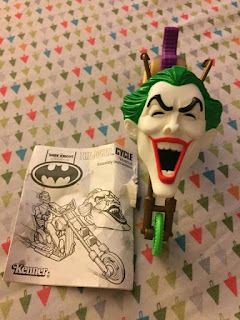 Speaking of awesome Batman items, check this out! From the glorious Dark Knight Collection by our friends at Kenner, The Joker finally has a sweet ride of his own to escape from the Batmobile. It kinda resembles the Green Goblin Truck from Maximum Overdrive in motorcyle form, but Joker's a vain guy, you can't tell me he wasn't above getting his painted puss on a purple hog. If his face on a $100 bill doesn't happen, this will suffice.


GREEN LANTERN AND REAL GHOSTBUSTERS GHOST ($1 for both): 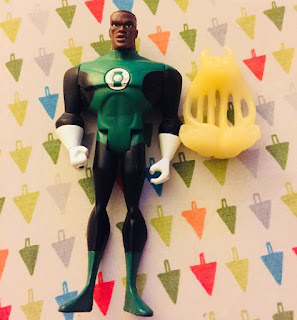 One of my vendor buddies came by to chat and told me he had a few loose Ghostbusters mini ghosts and he's also trying to eliminate all of his stock, so he was doing a "Buy 1 Get 1". Naturally I had to dig around his old, dusty boxes and found this sweet ghost along with an awesome JLU Green Lantern figure for my always growing JLU collection but the ghost is what excited me the most. Originally, I believed the ghost was the final piece to complete my Ecto 1, but I was wrong. Looks like it's the one that came with the mini GhostTrap. Which I should've known, since I had the Trap as a kid. But like I said earlier, glow-in-the-dark anything is the way to my heart, why wouldn't want to add this to my shelf? 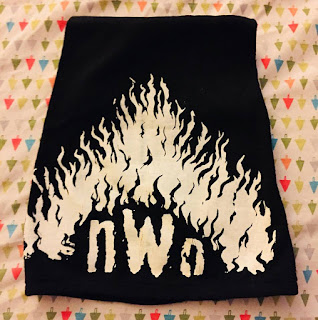 Collecting nWo merch, as discussed in previous articles, is a huge hobby of mine and this is an item I haven't seen pop up in quite sometime. The infamous "nWo War Bonnet" was a follow up to the the wildly popular Hollywood Hogan bandanna although this wasn't as well received by the nWo-ites across the world. In fact it was downright hated by many fans mainly because it looks silly and resembles an old dirty sock with the nWo logo on it. Admittedly, it's not the most visually pleasing headwear but as a addition to my nWo collection, it works. Maybe to wear in a future photo op with an nWo member or...oh heck, you know I had to try it on then and there, despite my wife hating it... 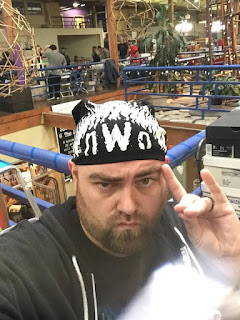 Not bad for an almost 20 year old piece of goofy headwear!


Not so bad of a haul. But it was time to pack up and leave. Laurie and I had made some nice dough and we were exhausted. So while we're taking stuff out to the car, we find someone selling some old Ninja Turtle items but I saw one piece I couldn't pass up... 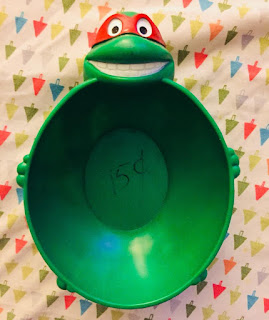 My all time favorite cereal is the Ninja Turtles cereal from 1990. Oh sure, it was just Chex with marshmallows but it was so delicious. I can still smell the way the box smells as weird as it sounds. But one of the biggest reasons I loved it was the free cereal bowl you see above. Attatched to the box, this delightful small cereal bowl. I had two as a kid and used them heavily and I would love to use one again, but it looks like this is just too banged up and marked up, so I won't be using this particular bowl. But a buck for an instant flashback? Wasn't turning it down.Would you? Nah.


I had a great time at this toy show and can't wait til March. Here's hoping for even bigger successes! If you're coming by, stop by my table and say hi!

Today's Stocking Stuffer is a real winner, and you're gonna need these to get through Christmas Eve's crazy madness: 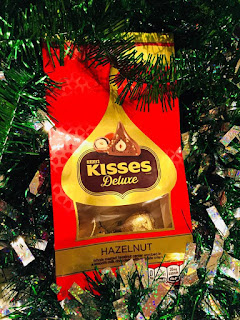 Hershey's is putting a delicious, Christmas-y kinda twist on a traditional favorite! These "Hershey Kisses Deluxe" are a great addition to that candy bowl in the dining room. 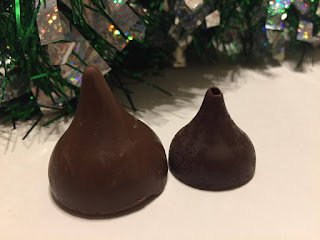 Not only do they contain a hazlenut in the middle with some delicious crispies, but they're even bigger than a normal Hershey's Kiss! Any Christmas related candy that has a mini nut reminds me of those Christmas parties as a kid where I'd sit on the couch trying to watch holiday specials and eat chocolate covered macadamia nuts while the adults bickered over politics and sports. They have a very familiar taste even though they're new to me.