- December 22, 2017
Let's briefly go back to a time when action figures were still on kids Christmas wish lists and playsets were still somewhat a big deal. On top of that, it was 1989, so you know anything Batman related was filling up those wish lists big time. I can attest to this. I wanted everything Batman and while I got a few cool items that I'm very grateful, there was always one item that escaped me. THE TOY BIZ BATCAVE!

The Toy Biz Batman line is often regarded as one of the weakest line due to the cheap plastic used to produce the three figures (Batman, Joker and Bob The Goon) and just reusing Super Powers molds for it's DC Comics Heroes line that would consist of others(Superman, Wonder Woman, Robin, Penguin). Not the best figures but you ask anyone alive in 1989, child or adult, and they'll tell you they had a Batman figure with extending utility belt. Until Kenner took back the license for their Dark Knight Collection in 1990, this was the only Batman figure on the market and Toy Biz sold a LOT. In fact, I'm pretty sure any left over were hand delivered with your morning paper and laundry detergent samples. Have you been to the flea market? Do you know how many loose Batman figures are out there?  I've seen less copies of Frampton Comes Alive in thrift stores than I have Batman figures at toy shows and flea markets. The action figures were one thing, but the Batcave was another. 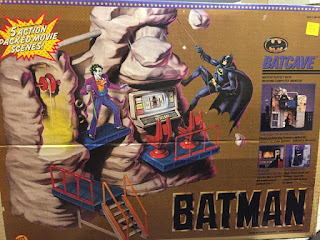 Oh that beautiful copper box. Toy Biz certainly knew how to draw a kid in with it's packaging. Kinda makes you forget about the fragile piece of cardboard and plastic inside. The box itself has some very fun illustrations featuring the Joker (how the heck did he get past that Giant Penny and Ace The BatHound?!?!) taking on the Caped Crusader. I took two things away from that image: 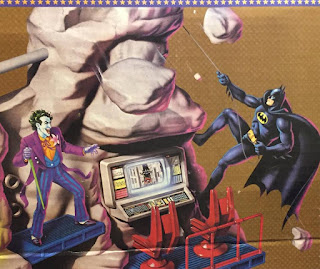 A: The Batcave is incredibly easy to break into.

B: One swoop and kick is gonna send Joker down that giant bottomless pit. Which, can't be a fun fall. We all saw the end of that movie. Splat. 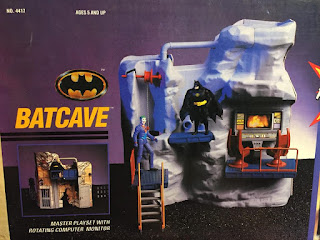 Funny sidenote about the box, the main image on the top flap is actually using repainted Super Powers figures instead of the new molds used Toy Biz created. This image was used in other promotional pamphlets and catalogs as well which lead a lot of fans to believe we were just getting repainted figures but that wasn't the case. Take a closer look: 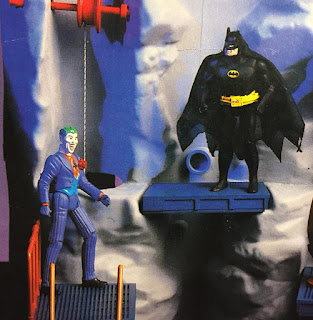 Enough talk about the box, now let's take a look at the toy itself: 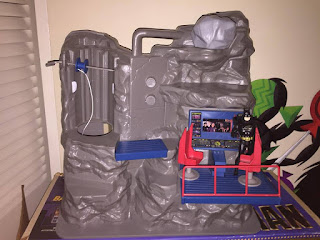 While it's not the most sturdy playset in the world, it's still a pretty cool toy. It's nice and light, so if the mood catches you on a sunny afternoon, a kid could just carry it outside and play in the dirt with it. I don't know a lot of kids who owned this at the time, but I've never seen a dirty, beat up Batcave, so my assumption is kids didn't take it outside. But, I can almost guarantee I would've. In fact, if it had survived past summer of 1994, I would've be amazed. I played with my toys and played with them HARD. Hence why there's only two WWF Hasbro figures that survived from my childhood to this day. 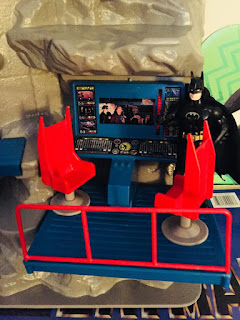 There's some potential here for some serious play. If you have this, I have to assume you already had a Batmobile and obviously the man in black himself, so there wasn't a lot you need to truly enjoy this in it's purest form.What you see is what you get. The Batcave is normally pretty fancy and up to date with the most high tech gadgets and computers, and this represents a more simple 1980s era Batman when all he needed was a giant computer screen and blue platforms with red railings. I'm not making fun of the color scheme, even if Toy Biz had an apparent hard-on for red and blue in their vehicles and playsets in the coming years, mainly because it makes sense. If you're dressed in all black, wandering around a dark cave, you're gonna need something bright to hold onto from falling to your inevitable death. Railing kills were huge in the 80s, so good on Toy Biz for taking steps in preventing that. When he's done preventing serious injury or death, he'll have time to do chin-ups on his chin-up bar... 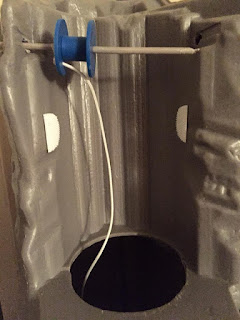 ...that sits above his bottomless pit. I guess that's some darn good motivation to do the reps it takes to get a body like Batman. Maybe if I had means to my demise, I'd probably get more chin-ups done in my life. 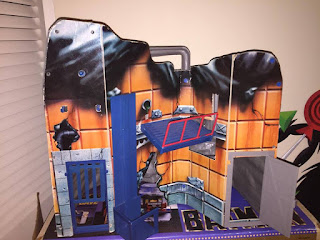 The back of the playset is pretty cool as it gives a different look. I can't help but think the back is more of Axis Chemicals than a headquarters, but hey, I'm a little bit of a conspiracy theorist when it comes to old playsets. A door where Bruce suits up, a trick bridge to make a villain fall into a jail cell, and an open hole in the wall right next to the jail. I'm not entirely sure what Alfred was thinking when he helped constructed that cave. Who's gonna walk into that that cell when they can just dash on out? You think Joker's using the honor system? No! He'll just look around, race out and hop on the balloon float and throw out money. Batman may be the best detective in the world, but he's a crappy architect. At least we now have our answer as to how the Joker broke in. I'm assuming the same plans Bruce used for this, are the same used for Arkham. 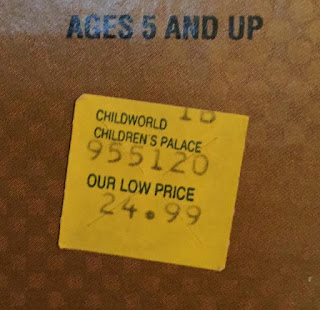 All this craziness for only 24.99? Sold. That's 1989 price. I actually ended up paying much less, if you included the shipping and the fact that it came with about 20 JLU and bendable figures as well as some loose Hot Wheels vehicles, the box itself and a few filecards, the $39.99 "shipped free" price was a downright steal. If I may brag for a moment, I think I picked it up at the right moment in time. 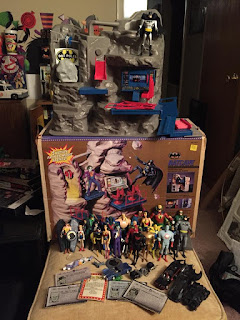 Ok, it's not the most impressive piece of plastic and cardboard, and even more elaborate Batcave's have been released in the years to follow, including one popular mold featuring Wayne Manor attached, but this is just a good, straight up, pure Batcave. I'm sure, just based off the playability alone, I would've enjoyed this more as a kid than I do as an adult. But for now, it's a great piece to own and finally be able to tinker around with it for this articles sake. It's a cool display piece and even cooler piece of Batman 1989 memorabilia. Definitely worth waiting all these years for!