on November 08, 2017
It seems every has a case of the post Halloween blues and some are even  hesitating embracing Thanksgiving and and Christmas. Look, I get it, guys. Halloween rings in the season and everyone gets wildly excited for pumpkins and Roseanne Halloween specials. I don't blame them. Afterall, the rest of the year can be a bit of a bore unless you're a fan of locking yourself indoors during a snowstorm with french bread pizzas or sitting out by the pool with a fancy drink.

Thankfully, getting out of that slump is pretty easy and I have a few good VHS tapes to help you accept the change in holidays. Now there's no "Halloween Night" theme going on, so you'll have to pardon me if it's a bit of a reach, but they're all great choices for your "I'm in the mood for Halloween NOW" afternoon.

PHANTOM OF THE MALL: 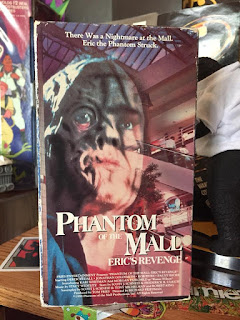 The title says it all. This movie is essentially Phantom of the Opera, but set in a shopping mall. It's 1989, kids want shopping malls, neon lights and Pauly Shore. Oh what's that? Morgan Fairchild as the uppity mayor? Ok. You got me hook, line and sinker! Obviously the audience is not fool. It's a different telling of the classic Phantom story but with a few(a lot) of modern day changes. Some good, some bad. It's also a late 80s slasher that feels like it was a rejected Lifetime movie, so don't expect too many interesting kills. It's all about the shlock and kitsch factor, and it delivers that in spades. Also, Pauly Shore. 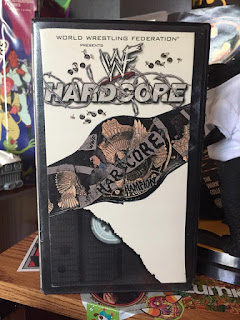 Back in the late 90s/early 2000's Hardcore Wrestling (read: hitting people with trashcans and lightbulbs and stapling dollar bills to peoples heads) was the hottest trend in the industry. Why? Because you can't tell teenage boys who were watching wrestling it's NOT cool. This of course lead to multiple cases of idiots creating backyard wrestling federations and throwing their little sister off a roof, through a table on fire.

Of course, WWF at the time thought it would be fun to give us a "hardcore" division and create some pretty intense matches as well as some entertaining segments. Were they right? Eh. I didn't mind at the time. After all, it was THE ATTTITUDE ERA, BAYBAY! You could go from an insane match between The Rock and Undertaker then you would get a bikini match between Terri Runnels and Debra and you could round the hour out with a match that took place in a Chuck E Cheese over a destroyed title belt that has a piece of duct tape on it. Were the matches included on this tape 5 star quality matches? Probably not, but it's certainly an fun hour or so that'll make you smile. 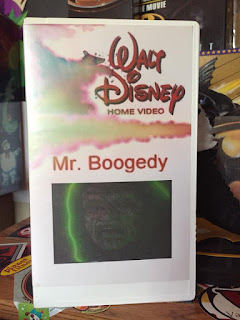 A Halloween classic for so many people my age. I actually didn't get to see this until just a few years ago and it hit pretty hard in the nostalgia. It's one of those movies that even though I didn't grow up with it, I still get zapped back to my childhood.This movie was pretty much Disney's attempt at creating a family friendly Freddy Krueger and it worked. It didn't blow up the ratings, but enough people liked it to warrant a sequel "Bride of Boogedy".But I like the first one more. Anytime you get John Astin, Richard Masur (aka the dad from License To Drive) and a young David Faustino in a Halloween special? Gotta be good. 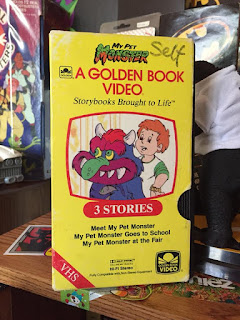 Speaking of being hit in the childhood memories, this one is much like Boogedy where I never owned or saw this particular tape until recently, but I remember heading to my babysitter's house and watching many tapes like these. Now, don't go expecting a full, 30 minute episode of the MPM animated series. You won't be finding those on this tape. No, just about three 8 minute stories taken from the Golden Book storybooks using very limited animation, almost like watching those old Marvel cartoons from the 60s. If you go into this expecting "motion comics", you'll be fine. Golden Book released a few other titles like a Masters of the Universe tape (which is just absolutely hilarious to watch because it's so awful), Seseame Street, Looney Tunes and Pound Puppies (which is the tape I remember the most). Music was usually good in these, animation was extremely limited and the voice acting bordered the terrible but hey, it's a fun relic of your childhood. It's hard to truly hate these because they were so odd and different.

Besides you haven't lived until you've seen Monster, with the voice of some 45 year old doing his worst "monster voice", entering a pie eating contest. That's your moment of zen, folks.

WHEN MOM + DAD BREAK UP 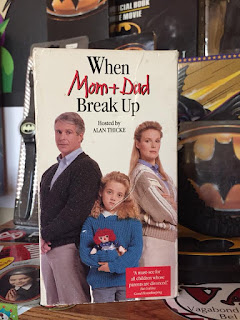 Ok, so it's not exactly as frightful as Exorcist or anything, but divorce is pretty scary, especially for kids. Thankfully Alan Thicke is here to save the day with a helpful guide for kids to cope with divorce. Tapes like these were pretty common in the 1980s/early 90s. They were created for counselors or teachers to show in class and assist in their lessons about real life. They were all kind of corny and usually had celebrities telling stories, maybe some skits and oh yes...SONGS.But just as important? This tape features the smooth hosting skills of Dr. Seaver but he's not alone. He brought in the heavy artillery. He needed someone kids could relate to to help deliver such a serious message and still keep it safe.

Yup, everyone's favorite flying magician. Now by the time this tape was released in 1987, He-Man was on it's way out. So if you're a child already dealing with a traumatic experience, this probably doesn't help. Alan's heart and the hearts of Filmation were in the right place, but I can't help but get tickled when I think of the fact that we live in a world where He-Man and Growing Pains exist int he same universe. It's even weirder to see Alan and Orko interact. I can't help but wonder if this could've been the next great buddy comedy. Twins? Forget it! Roger Rabbit? Move over, pal! Orko and The Thicke are in town!

Besides, the crossover between these universes is absolutely mindblowing. What's next? Mike Seaver try to prank Man At Arms or Teela and Carol discussing the hardships of being a woman of the 80s? Possibilities are endless. I mean, if AC Slater and He-Man can be friends...

Ok, so. Maybe it didn't get you out of the Halloween slump, but these tapes are a nice cure for the blues anytime all year round. I don't think you could argue that seeing Mick Foley and Al Snow go at it or Orko bickering with Alan Thicke wouldn't make you smile.