on August 17, 2017
I can't believe I'm typing this, but we officially live in a world where a Scareglow Funko Pop exists!

For the uninitiated on today's subject, ScareGlow was released in the 1987, when the line was winding down. His figure was most unique, just a giant glow in the dark skeleton with a giant purple Dracula cape. I'm a long time fan of action figures that glow in the dark, so naturally Scareglow has always been one I've been on the hunt for to no avail. Being one of the last figures released, his numbers were much lower than say a TrapJaw or Battle Armor He-Man. Now, as cool as the figure is, it's his backstory that gets weird. He was originally introduced as a spirit from the future that Skeletor brought to the present to scare people and invoke fear into his enemies. A cool idea but fans took this as it was Skeletor's future ghost after he died. Personally, I always just saw him as a hitman of Skeletor and never really thought of him as his future form. No matter his origin story, Scareglow, armed with his green "Scythe of Death" was just too cool for his own good and found a way to stand out of an already outrageous line. While he didn't get a figure in the 200X series, which I thought he would've made a darn fine addition to, he did make a special appearance in a charity comic called The Power Of Fear. ScareGlow was not seen again in figure form until 2009's MOTUClassic line.


So that brings us to today: 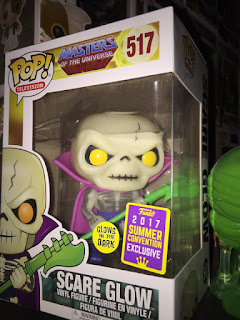 Scareglow was given the Funko Pop treatment as an exclusive for San Diego Comic Con, something I still can't believe. Of all the characters to receive a Funko Pop, ScareGlow is hardly a name I'd ever imagine. Sure, every license gets a Funko Pop these days, but such a minor character from MOTU? Come on. We'd get Snout Spout before we get any consideration for ScareGlow! But thankfully, it happened! He was also offered as an exclusive to Barnes and Noble the first day of SDCC, for fans who couldn't make the big show and boy, once he was announced, he was a must own for all collectors. Thankfully, I work at a mall that has a B&N and know some of the staff, so they were kind enough to put one aside for me. It pays to work at the mall and have a network going! So the morning it opened, I raced down from my store to get this beautiful figure. And what a beauty it is.


Best part about this figure isn't his fantastic and detailed sculpt. Or his terrifying weapon 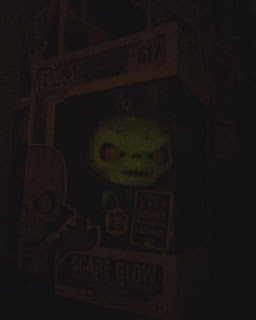 
Say what you want about Funko jumping the shark with it's multitude of properties, but they still know how to deliver the goods and they really delivered with this one, folks. I mean come on, can you imagine if they released Scareglow without the glow in the dark paint? Uh-uh. Nobody would truly care. I mean, eBayers wouldn't care, but that's their prerogative, bless their hearts. Scareglow without his most memorable feature would be a no-no and including it definitely sends this figure over the top in terms of uniqueness, which is what it's draw was in 1987 and now.

30 years later, we're still talking about this guy. Who'da thunk it? Of all the characters I would've expected to be discussing a new figure of, I surely would've not guessed him! But after 30 years, I'm glad to have finally gotten my grubby mits on him to put with the rest of my MOTU collection. Sure, he may not be the original figure, but he's still downright amazing, nonetheless! I guess that's the true feature of this character: his ability to stand out and be memorable.


Plus, if I'm ever working late, I got the sweet glow of this bad boy to keep me all warm and fuzzy...or fearful. One or the other.