on April 29, 2017
So there I am, coming home from work, when I discover that my apartment was invaded by Dinosaur Dracula! 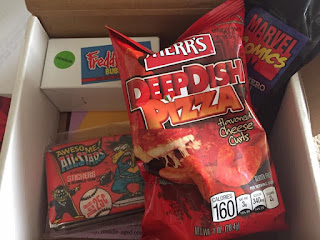 Well sort of. My buddy Matt, who's been running DD, and formerly of X-Entertainment.com, does a sweet monthly "FunPack" subscription service where the delightful taste of nostalgia hits you right in your face! Trading cards, stickers, a snack and maybe a toy or two, all waiting for you in one nice package! I had been gifted a holiday FunPack years ago by my fiance but that was before these became a monthly thing.

So here we are. I decided to take the plunge. I sold a bunch stuff on eBay and decided "hey, why not try out this DD funpack? What's the worse that can happen?". A roll of the dice financially, I'm sure, but I really wanted to try to get this one. Why, you ask? Well, read on to find out! 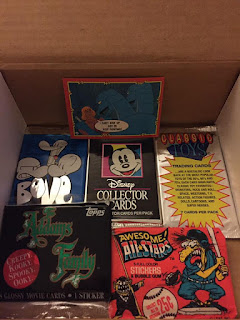 First off, it's not a funpack without trading cards. I'm a huge fan of old trading cards and these are some packs that I haven't gotten my hands on in quite sometime. Some great packs but I haven't been this close to an Awesome AllStars cards in years. I continue to love the parody/gross-out cards to this day and it's thanks to my childhood love of going to the general store and grabbing a pack. A great mix of cards for any subscriber. Who doesn't love opening old card packs? Sends you back to your childhood in no time!!!

Oh and hey, check out that He-Man card too! Cool! 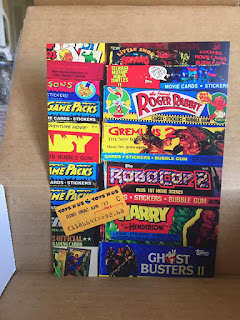 Still on that trading card high? Well, lucky you! A print featuring some memorable trading card boxes is all yours to place on your bookcase or desk or wherever the heck you want! Some favorites on here including TMNT 2, Simpsons, Harry and the Henderson and of course Gremlins, which is the first that caught my eye. I had picked up quite a few Gremlins 2 packs in 1990 and in fact have a card that was made into a magnet by a friend of mine on my fridge. I love this. It's gonna look great taped on my vhs cabinet! 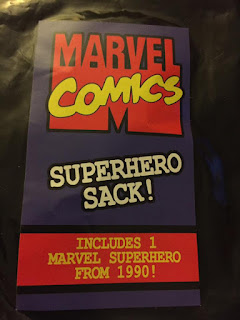 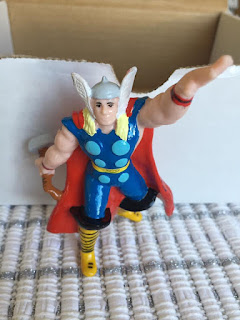 Ahhhh...a "Superhero Sack" featuring one randomly chosen PVC Marvel figure. I feel like a lot of properties back in the late 80s/early 90s were given the PVC figurine but I definitely remember comic book characters getting them. With comic book characters, especially Marvel, being such a huge part of our current pop culture landscape, these are a sweet addition. Even better, it looks like Thor is laying down some serious disco dancing, so how would I not want him on my shelf next to other PVC figures?

In every funpack, Matt throws in an a personal childhood story/essay and a newsletter where he dishes out a challenge to get your creativity on. Usually something that relates to that months contents. This month's challenge was to combine two characters into one. Now, I'm not the most artistic person, but I decided to at least attempt to create something. It's not gold or even good, but I present to you "Fredsday Addams" where I combined Freddy Krueger and the Addams Family as a whole. Hence the cigar and "Thing": 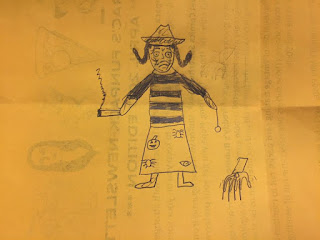 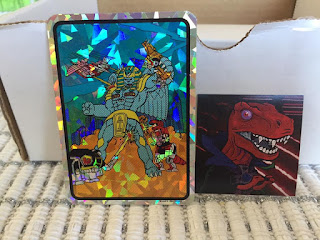 A Power Rangers sticker was part of this month's pack as well. I got King Sphinx fighting the Rangers Zords. I am such a sucker for prizm/vending machine stickers so this is a nice addition. On top of that, a DinoDrac sticker is included every month. So the sticker fan in me is happier than a pig in crap. Two stickers to add to my collection! 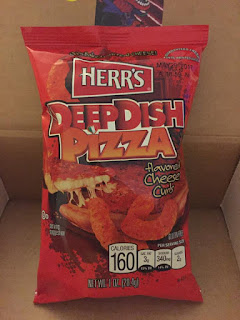 A little hungry after all that drawing? Don't worry, a snack of some sort is always included! This month's snack was Herr's Deep Dish Curls. Now, pizza flavored chips or crackers are one thing that I'm sure we're all accustomed to but cheese curls? That certainly caught my eye. Normally, something like this can go awry but it most certainly delivered one heckuva punch int he taste buds. I normally don't eat cheese curls and puffs that don't have a cartoon cheetah but these...oh my these... 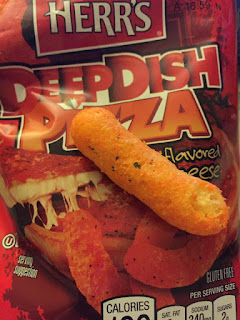 These are probably, next to pizza flavored Combos, my new favorite pizza flavored snack. A lot big flavor in a tiny curl. I couldn't ask for a better snack to be included in this box. On top of that, I really need to seek more of these out. I'm really having issue just describing them in words. If you see them, pick them up. 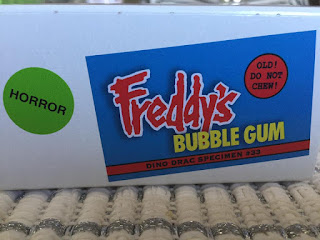 Now. The main event and the big draw in my opinion. FREDDY KRUEGER BUBBLE GUM. From 1988, these are quite the desirable items from Freddy collectors. I've already got one, but I'm always...ALWAYS...on the hunt for more. 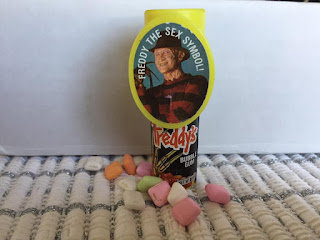 "Freddy The Sex Symbol" is the container I got. I'm very happy with it. It's one of the containers I was hoping for. Freddy's charisma certainly projects an image that can be found attractive by men and women but I can't say I've ever met anyone who's said they can compare him to a Bradley Cooper or James Dean, but hey, I had a crush on Naomi Harper from Mama's Family as a kid, so to each their own. 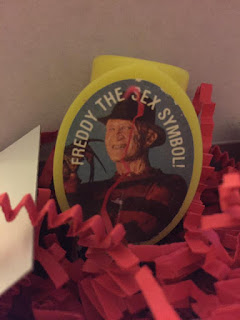 Oh and yes, that is the original gum. Dare I eat it? Well, no. I value having teeth. But I have been tempted. Believe you me. 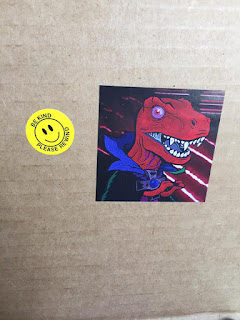 What else can I say about this box? It's pretty fantastic. I can only imagine how much fun next month's box is going to be! Keep your eyes peeled for the May Funpack as well as some great articles on pop culture, toys, video stores and more by heading over to DinosaurDracula.com !