on January 30, 2017
I've written about the old WWF Hasbro figures so many times that I feel like I've run out of things to say about them. I mean what can you say? For a toy line that ended over 20 years ago, there's not a lot of new wrinkles to be discovered.

Mattel decided to send us back to our childhoods, and just like Jakks did a decade ago with LJN-style figures, give us some new "Hasbro" figures as a WalMart exclusive line. Yup. I'm just as excited at the concept as you are. But, I'll be honest, with a 10 dollar price tag, are they worth picking up and not being about to pay for a tank of gas? We'll see...

6 WWE superstars, were chosen for the initial run. The guinea pigs if you will. Brock Lesnar, John Cena, Roman Reigns, Kevin Owens, The Ultimate Warrior and the Undertaker. Huh. 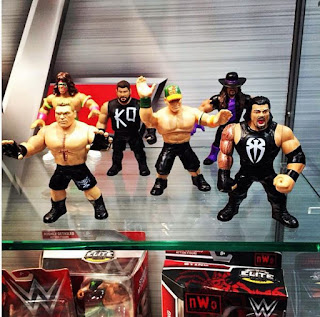 Not a bad lineup if you ask me. A nice mixture of old and new. The sculpts are pretty darn fantastic too. A lot of the action features also seem pretty in line with the original figures. Some body slams, a punch, a clothesline. All basics of the Hasbro line. We didn't need pose-ability, but we certainly needed a Doink that could punch-out The Warlord!


So as I said before the figures themselves carry a $10 tag. Now, these days, it's hard for me to drop ten bones on anything that doesn't involve bills and food, but I decided to pick up at least one. I thought "hey, at the least I can use it for blogging and it'll look great on my shelf.". And I was RIGHT! 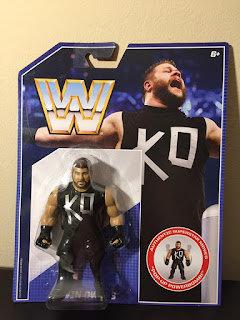 I picked Kevin Owens since he's been one of my favorites for years. He's just such a great, unique performer and deserves all the accolades he's gotten. Now, I don't have any issue with the rest of the guys released, but if I've gotta pick one, it's gonna be KO! Now, let's take a gander at the goods, shall we? 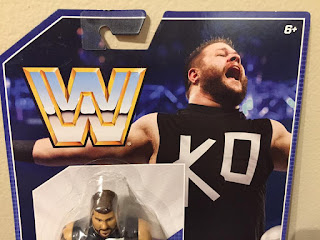 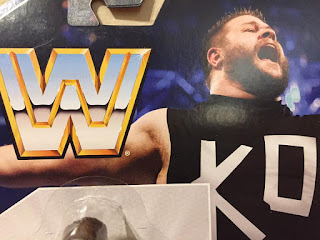 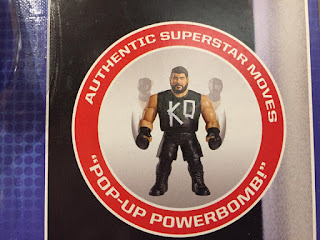 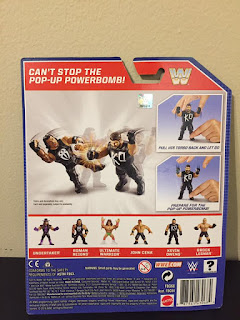 Look at that packaging. It's so spot on! The cut of the card, the logo, the "action feature" spotlight. It's very easy to see why so many fans have been trying to scoop all these up in record timing. The packaging sells you on this line very quick. If you're over the age of 25, you know what you're looking at. You're buying a Hasbro and you're rushing home to put them in your ring an have a Royal Rumble. 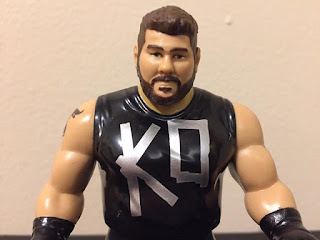 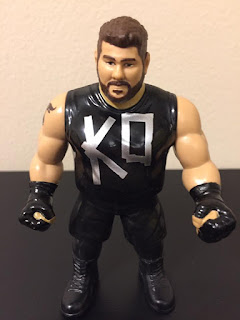 The figure itself is just as fantastic as it's terrific throwback packaging may suggest. I can't help but think someone, somewhere involved in this line was actually apart of the Hasbro production, just because it is so eerie how close it is to the originals. I can't help but look at it and just think that it's really a Hacksaw Jim Duggan figure with a new head sculpt. His pose, isn't the most fancy, but like I said, neither is Kevin. He's a barebones kinda guy. His pose fits him perfectly. 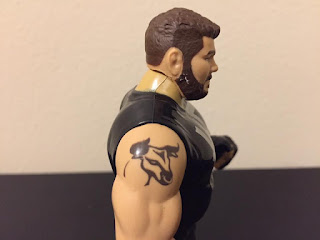 The tattoo on Kevin's right arm reminds me of Earthquake's shark tattoo. Sure it's a small detail but it's a great touch. I never expected for a second that Kevin's "EVIL" tattoo would've been a part of this, so I can't say I was even slightly disappointed.


His action feature, the main draw if you will, is rather dubious. Back in the original line, the "belly bop" was a feature given to the...shall we say..."larger" figures. Figures like Andre The Giant, Akeem and Dusty Rhodes would essentially hit other figures with their stomachs, if you pulled their heads back. It was weird, but it kinda fit. Kevin Owen's finisher is a "pop up powerbomb" so it makes sense for him to be given the belly bop to accentuate his powerbomb. It's a pretty good feature, but I would've preferred a punching feature, personally. But it's not enough for me to throw a fit and ask for my money back. It's a good feature that fits him and besides...WE'RE GETTING A KEVIN OWENS HASBRO FIGURE. How can I truly complain? 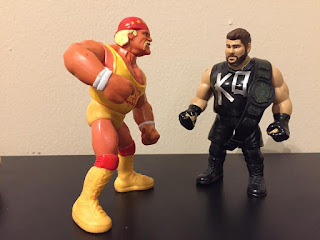 Size wise, compared to a Hogan for example, he fits in perfectly. Kevin isn't a colorfully dressed guy anyway, so he stands out in the ring and in my collection. Which is a stark contrast between the old days and today, too. We used to have wrestlers that looked like they rolled around in Fruity Pebbles. Now they dress like they shopped at Hot Topic. Makes sense to me. Gotta stay current, kids! Pass those Beats headphones! 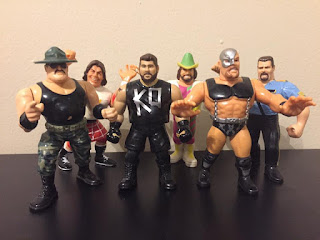 As far as I'm concerned, this is already nominee for toy line of the year. It gives the current generation of fans something to want to buy and it gives us old farts something to put with our old figures. They look great, feel great, and send us back to a time when the world wasn't so bleak and we still had this big, bright-eyed innocence about everything. In the end, isn't that why we collect these things to begin with?

Now excuse me, I gotta find Demolition to team with Kevin to take on LOD and The Warrior...