on October 16, 2016
It seemed WCW never could win. Even when they were at their best, they always seemed to screw things up. Just when they took two steps forward, they took 5 steps back somehow. I could use the nWo as an example. Taking three outsiders and turning them into the top heels of the company. That is until they decided just to add every former WWF wrestler they could get their hands on. And Buff Bagwell. Great idea, right? Of course, their almost hilarious ineptitude didn't just pertain to the roster of wrestlers, No sir! Why if you looked at the entire history of the company, they always seemed to do something stupid and ruin any good progress they may have made. One of the greatest and yet irritating mistakes was how goofy the company got with one of my favorite PPV's in all of pro wrestling history: Halloween Havoc. 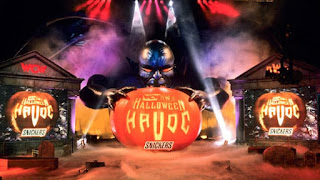 Halloween Havoc, started in 1989, was pretty simple. It was in October. Spooky and crazy shenanigans happened. That was it. That was all we needed to see. WCW would celebrate the favorite of holiday of many by sprucing up their stages with almost grade school-like decorations. Maybe a crappy tombstone or four, a haunted house entrance set for the wrestlers to waltz through and more times than most, even the announcers showed their Halloween pride. Just check out Jim Ross as a gangster and Paul Heyman, in his Paul E Dangerously days, as a vampire! 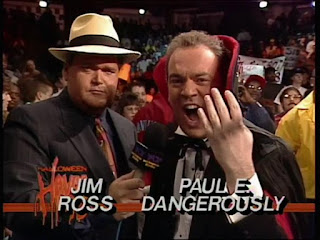 What's even better than Paul E as a vampire? Oh I don't know, maybe ELVIRA doing commercials for the first few PPV's? Yup, everyone's favorite Horror Hostess helped hyped this show and added some extra horror-Halloween cred to the show.


So what went wrong? Well, WCW would pull out all the stops to further their storylines and offer sometimes what seemed like haphazardly planned gimmicks and spots. They didn't have an April Fool's PPV that they could pull the wool over the yes of fans. So what's the next best time to do it? Halloween! Of course! Lets take a look at just a few examples of their silliness, shall we?

One of the most famous examples was from 1990. On top of still trying to get through the infamous Black Scorpion nonsense, in which a guy in an all black body suit haunted Sting and turned fans into tigers somehow, Sid Vicious was taking on the most popular star in the company, Sting, for the world title. When halfway through their match, Sid's fellow members of the 4 Horsemen decided to come out to the ring and abduct Sting for a while. And when I say "a while" it really felt more like four hours had passed. I swear that by the time Stinger came back to the ring, after escaping his villanous foes, I was prepared to start smoking and take drivers education class. Thankfully, my neon/dayglow colored hero was back and prepared to take out the giant goofball who would then scream about how he wants to rule the world. But it didn't happen like that. No. Sting lost to Sid! And even worse, it wasn't Sting! He was BARRY WINDHAM DISGUISED AS STING! And then...Sting came out and pinned Sid to retain his title. Confused? You should be. I'm pretty sure the bookers were too. I mean, I see what they were trying to do. Sure, it seemed like an easy switcheroo. But I guess not finding a way to detain Sting until at least the end of the PPV is the least of the Horsemen's problems. Technically, as soon as the kayfabe "WCW Board of Directors" saw Sting backstage, the match should've ended. But...ya know...wrestling and logic. Am I right, here?

Oh yeah, on top of that, Junkyard Dog came out wearing a weird werewolf mask.

1991 was another disaster too. But not as confusing, just annoying. Enter: The Chamber of Horrors match. For newer fans, imagine Hell In A Cell with well over 10 wrestlers, useless props but instead of getting a pin, you have to strap someone in an electric chair and flip the switch. Yup. Just a bunch of grown men essentially playing a game that was probably inspired by something in gym class. So, punches and kicks are thrown and after a fight of Batman 1966 level of fighting, Abdullah The Butcher is placed in the chair and the switch was thrown. Obviously, he didn't die, but fans came close due to just how boring this match really was.

1992 was headlined by Sting vs Jake Roberts.  At the time, it was awesome to see Jake show up unannounced and go after Sting at a show in Baltimore. At the time, wrestlers from rival promotions didn't just pop out of the crowd and attack someone. They just sauntered out and fans were amazed. Jake had been a HUGE name in WWF for years so to see him jump ship was weird. What's even weirder is the mini movie that WCW produced to hype their feud and match for the PPV.

For the record, I love this video. It's so odd. Plus, lazer eyes.

The tagline of this years show was "Spin The Wheel Make The Deal" match. Imagine a giant wheel with matches that sound somewhat interesting with no real descriptions. But, just as you'd expect, WCW screwed it up quickly. instead of a "First Blood match" which could've really been fascinating to watch or a "Eat Aunt Betty's old Potato Salad Match" we got a "Coal Miner's Glove Match", a match where Sting and Jake fought over an old miners glove on a pole hanging from the turnbuckle to knock each other out. After an ok match, Sting made the climb to grab the glove while Jake reached into his old bag of tricks and grabbed his snake to bite Sting. But as soon as Jake turned around, he was met with a punch from Sting. This caused Jake's pet Cobra to bite his cheek and help assist Sting in vanquishing the slithering villain.

What could've been a great match lead to a real crappy and dull encounter. WCW could've stretched it out and shown Sting and Jake exchange victories. But nope. Bad bad bad.

The 1993 edition was pretty bland but gave us a real bizarre intro video featuring Tony Schiavone welcoming children into his house and creeping them out.

1995 was perhaps the worst offender just because it consisted of a chain of events that were almost intolerable. Allow me to just give you the bullet points:

As you can see the weirdness of this night is all due to Hulk Hogan. I know that's shocking. I believe at the time, Hogan had a lot of control over his bookings, so I'm sure he had a LOT to do with these atrocious ideas. But hey, a monster truck showdown. That's a new one, right? Haven't seen that before...or after...thankfully.

As much as I tease this show, I do remember getting excited for it as a young kid. I loved Halloween and loved wrestling, so to have them combine both was pretty cool. I still wish WWE would somehow resurrect this theme for a PPV. Maybe they will, they've already brought back the brand split, so hey, we could totally see a new Halloween Havoc!


Come back tomorrow. As goofy as these events were, I'll be looking at the biggest and worst blunder in Halloween Havoc history... 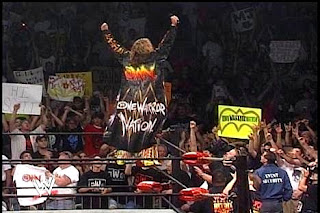