on September 16, 2016
The Punisher has always been tied with Batman as my favorite superhero. As a child, there was nothing cooler than a huge badass blowing things up and fighting for good. As an adult, I find him to be a sympathetic character and respect his belief of cleansing the streets and making those who get away with their heinous crimes. When you hear about the horrible things going on in life, even as a optimistic pacifist, wonder what life would be if Frank Castle was running around. At my current age, it's no longer about The Punisher blowing things up, it's cleansing the world of crime and perversion.

And believe it or not, a LOT of that interest has to do with the Dolph Lundgren movie from 1989. I had been a fan even before seeing this movie with my brother in 1991 so I knew what the Punisher meant, which to a degree, the movie kind of delivered. If you talk to people about this movie, I would bet good money they will roll their eyes and ask to move on from discussing it. Rightfully so, I get it. Despite not having a skull on his shirt and having issues delivering his lines, Dolph just didn't feel like he understood the character or what made him tick. I also understand at that point and time, comic book characters and movies were only marketable to kids. It wasn't really until Batman, also from 1989, that companies saw potential in dark, serious comic book movies, so I don't think Dolph deserves as much blame for portraying the Punisher as he's received.

Now, that said, the story of this movie has always been a little shallow. Sure, the general public who *knew* Punisher just wanted him to blow stuff up. And that, indeed, is delivered. But for loyal fans of the character, it just felt like a rehash of the Sylvester Stallone movie Cobra. There wasn't a lot of development in the Punisher character. He just kinda showed up and started shooting people and blowing things up. What made him the Punisher? Well, it's kinda hinted at that he's a former cop who witnessed his family murdered by a mob hit. Believing there's no justice, he goes after those who he deemed guiolty of crimes.  The movie is just pretty plain and underperformed for fans and critics, and yes, the movie studio. This, and that atrocious Captain American movie from 1990, is a huge reason Marvel was considered a huge joke at that time. My, how times have changed.

Well...all this made Punisher 89 an absolute embarrassment. Until now... 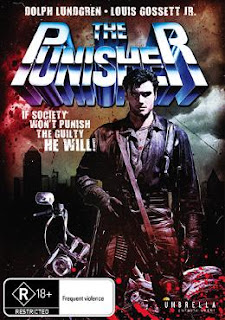 Austrailian distributor Umbrella Entertainment put out a bluray for any and all comic book/action movie/Punisher fanatics must own. Why do I say that? Simple, it includes three cuts of the movie.

Let me repeat that: THREE CUTS.

You read that right. Three different takes on the Punisher: The so called "theatrical", the directors "Ultimate Cut" and the Mark Goldblatt Workprint. Now, each movie has differences. The "Ultimate Cut" and workprint have different openings to the movies and even more origin stories, including footage of Frank on duty, his family being murdered, and more footage of the Punisher in action. While it's a few scenes that were taken out of the theatrical/vhs release, it makes a giant difference. It allows you to sympathize with Frank and discover what lead to him abandoning his normal, every day life and becomes the vigilante we all know and love. An origin story of a character that, at that point, only a handful of mainstream fans are aware of, helps with the storytelling. If you hated the original cut, you have two more options to give it a fair shake. Even better? The directors cut has commentary from Mark Goldblatt, which provides a lot of useful tidbits of info and a look into the production of the movie.


Now, if that's not all to reel you in, the bonus features are just as incredible. Brand new interviews with the man himself Dolph Lundgren, director Mark Goldblatt, a GAG REEL, and the theatrical trailer. And even cooler? The reversible cover artwork: 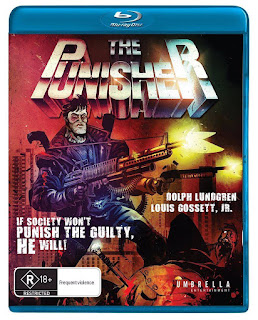 These features are way more generous than this movie deserves, some would argue. After all, that dvd release from the early 2000s was trash and that's what this movie deserves, right? Wrong. This was the first mainstream exposure of the Punisher and as much as it can suck, it still should be watched and studied in terms of just how far Marvel has come and in fact, I think this movie is better than that Thomas Jane movie.


Thanks to Umbrella Entertainment for releasing this. It's a release that every fan should invest in. You can purchase it, here.here. Of course, it will help if you have a region free player or know how to hack your bluray player.
-Chad