on June 19, 2016
I went back into the wild for the first time in about two months. I had been away from the flea market game for about 2 months. After the famous McDonald House 4 day victory(which yes, I know I alluded to a third entry, but stuff happened and I didn't. Sorry, I gotta admit, nothing that amazing was found anyway, so it's for the best) I decided I was going to take a small hiatus. But today, I decided I had waited long enough. I sat on the sidelines while my fellow flea market fanatics struck gold. So I decided today was the day I'd grab my water bottle, iPod, and head back out into the ocean of bargains.

While I went in with ZERO expectations(as you should always do when it comes to flea markets! I can't stress this enough!), I didn't expect for the first table that I saw as I entered the market to be one of my favorite tables ever and a huge victory. My eyes directly went toward table after table filled with toys, toys, TOYS!!! Check it out, you wouldn't believed it even if I described it: 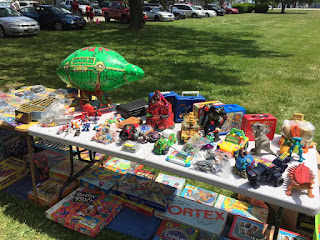 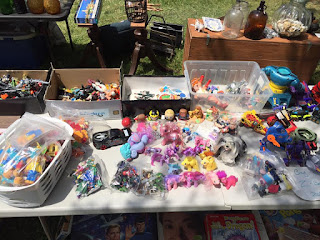 Now keep in mind that was only two tables. The seller had plenty more where this came from. But this is the kinda stuff I'd push over your grandmother for. No offense, but if you're looking at this table and tell me that you wouldn't do the same, you're lying. Lunchboxes, board games, action figures, pins. It's like I wouldn't have to do anymore searching. I could've remained here, made my purchase and leave. Especially when I saw THIS: 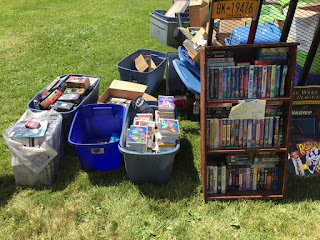 All those VHS. OH MY GOSH. I CAN'T HANDLE THIS.

Tubs and tubs of VHS. Exactly why I'd come to flea markets. Yes I know. I'm constantly looking at thrift stores, but unlike thrift stores, when I do find tapes, it's by a collector and I can usually have a conversation and enthusiastic chat with the seller about the movies themselves. And usually, while it's not my intention, the seller gives me a deal after seeing what a fan I am. Not a bad perk, but not the goal. I always enjoy meeting my fellow movie fans/collectors and this guy was DEFINITELY a fan. We had a great discussion and even a few laughs and in turn, he gave me a good deal. But, since this was my first table, I had to walk away and check out other tables. Thankfully, he put a few tapes aside for me. Really cool of him!


So I walked around and checked out other tables. The only thing that truly caught my eye was this awesome Snoopy lunchbox! The seller wanted 20 bucks, which isn't terrible but I didn't have the cash. Which if I had the money, I would've come home with it and would be taking it to work tomorrow. Don't doubt me, I actually took my Transformers lunchbox to high school one day. Truth. Being 6'6 in high school pretty much allowed me to do that without much hassle. 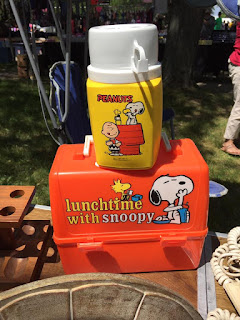 So, it was time to come back to my buddy at the Table of Glory. He held my tapes and as I mentioned, gave me a great deal. But check out the rest of the haul, first. You'll understand why when you see the tapes...


MCNUGGET BUDDIES: $1 FOR BOTH! 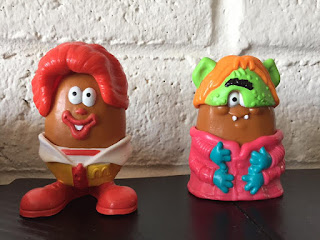 I LOVE the McNugget Buddies. I can't exclaim that enough. A great collectible from a time when McDonalds had no issue selling cartoon characters to sell their terrible food to kids. At that time, the Happy Meal toys were the must own item for all kids. These were a huge favorite amongst a lot of kids. How could they not be? Kids loved the McNuggets already so making them Halloween toys was even more of a no brainer. Even now, as a grown adult(some would argue that, though) I can't help but get excited when I see these. These particular choices seemed to be from a later series from the mid 90s where the costumes were a little bit goofier and more extravagant than the "basic monsters" of the earlier series that usually centered around a vampire, witch and ghosts and stuff. But the later series, revolved around aliens, a lizard, and what appears to be a DJ for a rave. No I'm not joking: 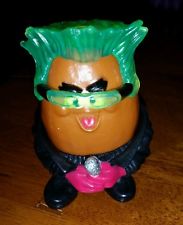 While I'm not the biggest Ronald fanatic, a McNugget Buddy dressed as the face of McDonalds mascot is something I couldn't pass up. So of course, seeing these in a box of just random crap, I offered the seller a buck for both and he gladly accepted. Excellent! I can add more to my McNugget army! YES! Step one to a perfect trip has started. But wait...


MICHAELANGELO BADGE AND GOOSEBUMPS BUTTON: $1 FOR BOTH! 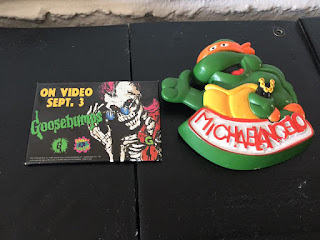 These. Wow. The Goosebumps button is from the initial release of Goosebumps on VHS from...1995? Maybe 1996? I'm not the most respected Goosebumps historian, but that's my guess. But as a Goosebumps fan and button collector, had I left without this, I would've regretted it for a while. Plus, the image on that button is just awesome. I couldn't say no. This was perfect. And now it'll find a very comfortable spot on my pin littered hoodie.


The Michaelangelo badge came from a late 80s Burger King promotion that featured all four Turtles and ol' Shred-head as well,  from what I believe is the first of what would be a couple TMNT fast food promotions. It's a neat little badge that you would attach a small fixture to the back and wear it around as cool as 1989 would allow you to be. The coolest part? If you push down Mikey's radical thumbs up, you'd reveal a most bodacious party message from Mikey to you! 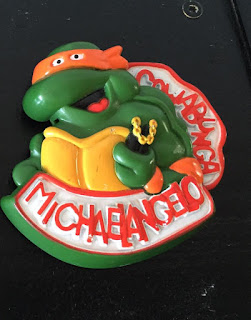 Cowabunga? What else were you expecting? "Jolly Good Show"? You clearly don't know the man very well. But worry not, Mikey loves everyone, so you're forgiven. 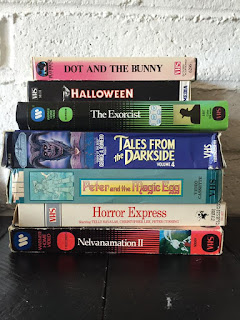 The main event. Look at this haul. The kind of find that all VHS collectors dream of. Some big box horror, some obscure cartoons, a Media copy of Halloween and a Warner Brother ClamShell release. Want a better view? I don't mind obliging that request! 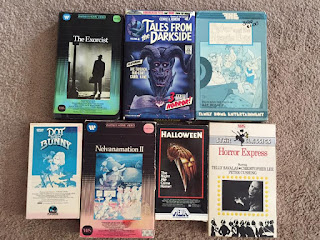 How beautiful is that? Words can't explain it. The entire lot is a great set, but the Tales From the Darkside tape is my personal favorite. How could it not? Look at that cover!!! It's like a comic book cover! I LOVE IT! On top of an awesome cover, it also reminds me of those tapes I'd see on the top of the horror shelf at the video store, so instead of putting on eBay like I previously considered, I'll put it on top of my VHS shelf for old times sake.

A great day at the flea market, I think I'll space my next trip out by a week or two. Who knows, maybe I'll head back and chat with my new VHS buddy and pick up that Snoopy lunchbox.