5 VHS For A Great Saturday!

on March 12, 2016
It's Saturday, it's 55 degrees outside and I have zero motivation to go anywhere today. With the windows open, the wind blowing in, I've got myself planted right on the couch. I've got a Diet Pepsi next to me and a bunch of fun VHS tapes stacked up on the TV stand. When it comes to weekends, I try to get as much done, but if I don't have a good movie going, I find it hard to get motivated. Maybe I'm lazy. Or...

No, I'm lazy. That's what it is. No way around it or sugarcoating it.

Anyway, while my weekends don't necessarily consist of nonstop vhs binging, it is a big part. I mean, I did have a plate of waffles for breakfast. So...there's that. See? Progress and productivity.

But the question stands: Just what tapes do I have rarin' and  ready to go while I lay in bed? Well, strap in, because I've got 5 tapes that will make even YOU want to call out! 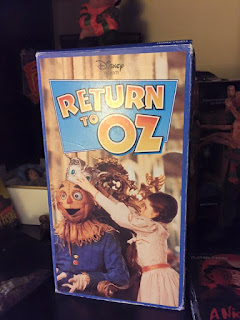 Holy crap! This one. I didn't watch this til last October at the behest of my buddy over at SexyArmpit, Jay. I had always heard of this "sequel" to the much beloved Wizard Of Oz. Now, truth be told, I never really got into The Wizard Of Oz. Always thought it was kinda plain. But this is a much more interesting take. It tells the story of Dorothy(played by a young Fairuza Balk) returning to Oz and finding what a complete mess it's become. Once again, it's up to her to fix things and turn it around, but it's not as easy as she doesn't have her friends from before.

I know it's a much different movie and not even really a direct sequel, but I prefer this one over the original Oz movie. Yes, I'm sure it sounds weird but I've gotten into this more than I ever did the MGM classic. Not saying the original is bad. I can't. It's a beautiful movie. I just liked this more! It's definitely darker and has some more horror elements then the first, although, the first one has it's fair share of horror elements as well. But what's the best/most frightening part of this movie? 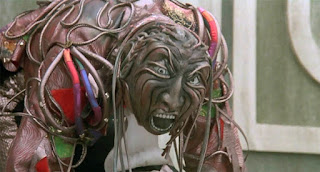 
Return to Oz may be a "kids" movie so to speak, but it definitely has enough for adults to enjoy as well. I could do an entire article on this movie and some day I may. Until then, let the Wheelers live in your nightmares forever. 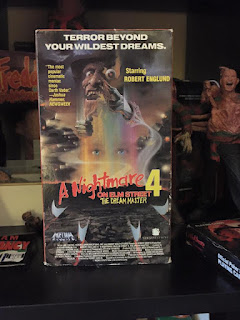 I love this movie. While part 5 is my favorite of the series, this is one of my top Elm Street sequels. And actually, my favorite poster art too. The poster art is very vague and mysterious that essentially tells you nothing about the movie itself. But then again, back then, a lot of horror movie posters were like that. Kinda added to why so many people loved that era so much.

This Elm Street revolved around Freddy coming back, killing Kristen Parker and taking on the new Elm Street heroine, Alice. Sure, it sounds like it was the same as the previous three movies, but it continued the trend of over the top kills, bigger Freddy gags and one liners, and more grander visuals. It was described by Robert Englund as "It's kinetic, it's energetic, it's the MTV Nightmare on Elm Street!". Hard to argue with that, especially coming from the man himself. 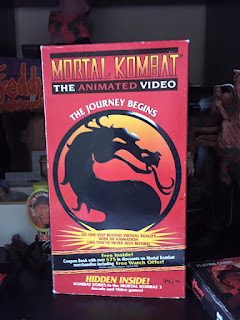 The only way to describe this movie is as a real steamy piece of crap. It is. Sorry. This animated movie was a true bore and the animation was downright atrocious. Sure it was 1995 but that's not an excuse or even a reason to receive such cheap animation. My assumption, without googling this, is this was only made to help hype up the live action Mortal Kombat movie(which still holds up!) so it got rushed. Heavily. You can tell little to no effort was put in, minus the voice acting. A lot of experienced voice actors were brought in, including voice acting legend Jim "Winnie The Pooh" Cummings as Shang Tsung. Sadly, the casting of this voice acting legend just wasn't enough to help make this watchable.

I probably shouldn't have chosen this one. It's just making me angry. Even more enraging, I spent a dollar on it. I feel like hiding under my blankets and moving on with my day.

ALlAN QUARTERMAIN AND THE LOST CITY OF GOLD: 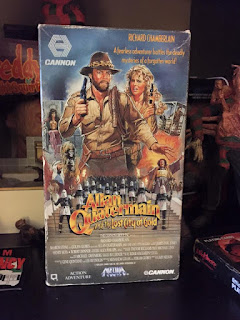 Ahhhh...a little action to make up for that last vhs monstrosity. The sequel to "King Solomon's Mines", the hunky  Richard Chamberlain plays the iconic action literary hero, Alan Quartermain. This sequel was less than stellar and not as exciting as the first one, but still holds some charm. Cassandra "Elvira" Peterson plays the seducing Queen Sorais and even James Earl Jones as the evil, Muppet sounding Umslopogaas. Yes, I had to cut and paste that from IMDB. I'd just screw up the name no matter what.

Now, obviously you can see the Cannon Films logo up there, so you can tell all expenses were spared on the effects and script. Just imagine a LOT of green screen, a rushed script and not a lot of rehearsal time. Still, if you're like me, you LOVE Cannon films and it's your duty to own as many of these terrible pieces of crap as possible. Richard Chamberlain is a great actor, and admittedly not Indiana Jones, but he still made this role his own. Definitely worth the watch! 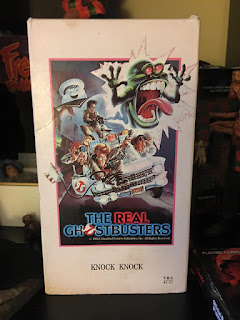 So many Saturday mornings of my youth were spent watching this awesome cartoon. If you were a young child in the late 80s/early 90s, when Ghostbusters came on, you did NOT move. You grabbed your Ecto Cooler, a sandwich for lunch, your Real Ghostbusters figures and you sat your butt on that couch! And how could we not? It was so superbly written and beautifully animated. It was such a perfect companion to the movies. A ghost.villain was introduced every week gave us new and wild creatures that made us scared for the Ghostbusters wellbeing. It also added to the Ghostbusters lore and made this show even better.

Confession: As much as I loved Real Ghostbusters, I have to confess, I didn't like Slimer becoming the "wacky pet/sidekick" of the show. I know, I know. Blasphemy. I always liked him as the nonstop eating machine that just slimed people. I get why he was made the face of the series and eventually given his own cartoon, but I just had a hard time accepting him even as a kid. That said, I LOVED his design!As far as designs, I prefer this one over the movie. It worked, I'll admit that. But, I just preferred it being a Ghostbusters-centric show. I'm sure I'm in the minority though. But then again, wacky, goofy creature/sidekicks was running rampant at that time, so I really shouldn't stay mad at Slimer himself. Besides. He's on Ecto Cooler boxes, yo.


Well, minus that Mortal Kombat tape, I'd say I have a great lineup. By the time lunch rolls around, I'll have enough motivation to get off the couch and make a sandwich. Now if only I had some Ecto Cooler and my old WWF Hasbro figures, I'd be set...