on December 13, 2015
I hate to sound like that guy, but man oh man, I really miss trading cards. The mystery of what could be received. Trading them with my friends on the playground or in the neighborhood. The stickers that would end up on my dresser or the side of the tv and in the process, pissing off my brother because his tv now had a Growing Pains sticker.

Point is, they were a nice novelty when we were kids and even now. I'll pick up a pair of old WWF Superstars of Garbage Pail Kids cards in hopes that I score something cool. There's a lot of great packs of the past pop culture properties ranging from tv shows to bands to cartoons to comics and even Troll dolls. Everything had a trading card set dedicated to it. Including horror movies...

Fright Flicks was an awesome set given to us by the trading card gods at Topps. This set focused on the hottest horror movies of the time. Freddy, Pumpkinhead, Ghostbusters, Poltergeist, House, Fright Night are only some of the titles that this awesome card set covered. For a horror fan this was perfect. 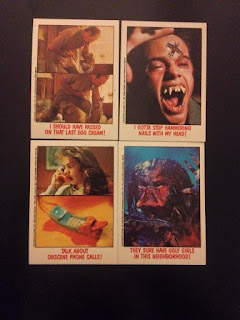 The cards themselves featured scenes from various movies with wacky quotes on the bottom. Kinda makes the scary creatures and monsters more kid friendly. Concerned mothers are more inclined to buy their kids scary cards if it's not 100% blood and guts. But a wise crack about Freddy roasting marshmallows? That'll get you a pack in no time. No harm, moms! Give little Billy that 50 cents to pick up a pack and feel safe! 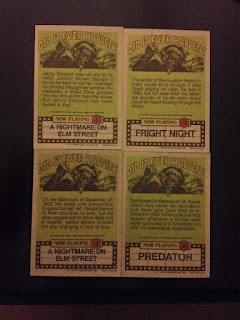 The backs of the trading cards take more the PG rated spook story approach. Sure they could've got into detail about the movie they feature on the front, but instead it gives the young reader a small campfire ghost story/urban legend. Which if you're ten years old, trying to scare your friends with fictional story you pass around school as your own is pretty cool. Plus, you kinda get to be a sort of horror story kingpin in school. Nothing makes kids feel more power than starting false rumors with nothing to back it up other than a trading card. Actually, I'm pretty sure that's how the internet started... 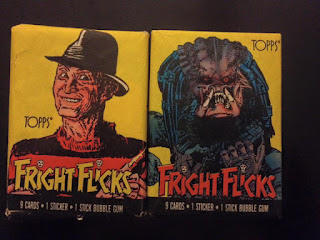 The wrappers were standard Topps creations. Cartoony versions of the horror helped these packs become very popular. I always loved the Topps art. I could always spot them a mile away. It was kinda comforting. These were no different. Freddy, Predator, Pumpkinhead and Amy from Fright Night make sure you know you're getting quality cards and big names.

Ahhh the stickers! Another Topps hallmark. As I mentioned, I loved the stickers and these packs had some really fun cards. Usually just the name of the movie or the character, but this one always stood out as my favorite piece in the entire line: 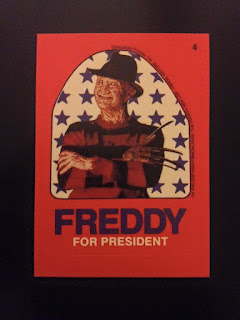 Gets my vote. And yes, you better believe this is being placed in a hard case and joining my Elm Street memorabilia collection! It's so perfect! 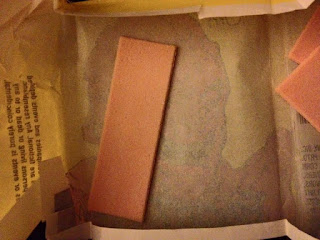 Of course it wouldn't be a pack of Topps trading cards without a stick of chewing gum harder than concrete. I dare not even TRY to eat these. Why? True story: Christmas 2002, my friend Ryan and I bought a boatload of old trading cards and actually chewed the gum. It was actually pretty good tasting and we became addicted to these. For the night. A week later, I went to his place and he told me he threw all the gum out because he got a stomach virus the night after our gum binge. That was enough for me to swear off trading card bubble gum for good. 13 years strong, son.


All in all, these are solid cards that represent an era when horror was ripe for becoming cartoon characters and cereal mascots so these cards were a natural step in merchandising evolution at that time. They're a very nice collectible that most horror fans should have on their shelves. At least one or two packs. Me, I've got unopened Predator and Freddy packs on my shelf as we speak.

So, the big question: Wanna trade my Slimer for that Freddy?