on November 30, 2015
I don't normally participate in Black Friday and this year was no exception. However, if you're able to wake up buttcrack early to buy Inside Out for 2 bucks at 6 am, then in all seriousness, you're better than me. But honestly, I used to do Black Friday, but I can't anymore. Plus, there just isn't anything that ever catches my eye. Ok, there's that. I'd pay any price to own a Arn Anderson figure with fist pumping action. But nothing else.

That is, until yesterday. And even then, I'm a little late.  It's my fault for being late to the party though. But in this case, it still paid off. See, Funko decided to put their all into a fun exclusive with Gamestop and gave us a great reason to wake up early(or in my case, wait three days later) with these amazing Mystery Boxes... 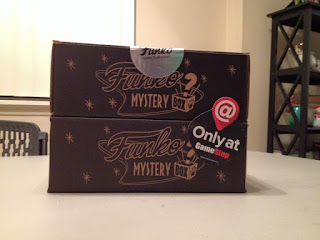 Ahhhh....the mysterious allure of the Mystery Box. Remember the scene in UHF where some shmuck on Wheel of Fish gave up their delicious red snapper for a mystery box containing ABSOLUTELY NOTHING?!?!?!? That's the power of a mystery box. But what if, for 20 bucks each, you were guaranteed an EXCLUSIVE FUNKO POP, TWO Reaction Figures, One pin, and a Pocket Pop! Even better, 1 in 8 boxes contained a GOLDEN Pop! Yessir. Thank you, I'll take 2!

What exclusive Funko Pop Vinyl's were being offered, you may think? Take a look below... 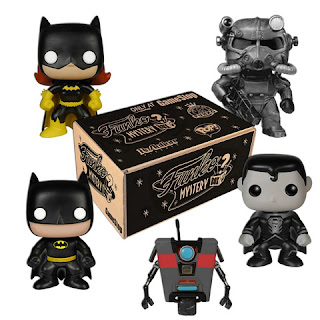 Holy crap, check those out! No wonder a lot of fans went crazy over these!

So after discovering my local Gamestop had a few leftover, In fact, the clerk told me that he started with 40 and after my purchase, they were now down to 4. Not bad, actually! I had to at least pick two up just for chance of receiving a Batgirl or a 1989 Batman, my two biggest wants. (But after looking on Ebay, I wouldn't mind a gold chase variant!) I knew whatever I'd receive, I'd still have something that others just kick themselves for missing out on. So, I came home, gave my fiancee one to open and I opened the other. The contents, were a real shocker. 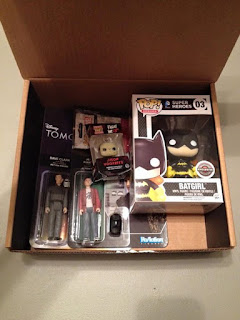 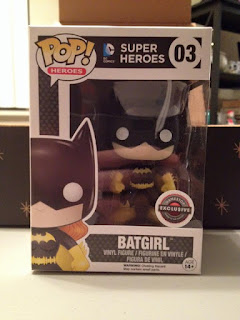 HOLY CRAP! BATGIRL! Score!!!! Yessss! Trying to find a Batgirl Pop Vinyl for under 50 bucks is a pain in the butt, and who doesn't love Batgirl? Laurie was very excited to pick this one out, because she likes Batgirl too! We can now put a Batgirl up on our Funko shelf next to Batman and Robin. Finally. The Terrific Trio has been assembled! 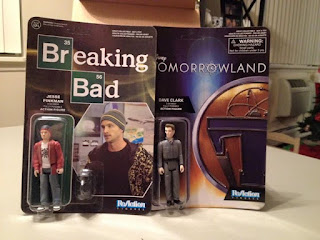 Next up, the ReAction figures. First off, Laurie is the biggest Breaking Bad fan you'll ever meet. I mean, for a good month after last Christmas, all her time was consumed in watching the entire bluray set. So, when she laid eyes on Jesse Pinkman, she was even more excited. Much like Batgirl, you can't hate Aaron Paul or his lovable druggie character of Jesse. Plus, it could be used as Todd from Bojack Horseman!


The other ReAction figure we received was a character named Dave Clark from Tomorrowland, Disney's summer flop. I literally know nothing about the movie, but he looks like he's been punched in the face or his face turned into a melty Nestle Buncha Crunch, so he's ok with me. 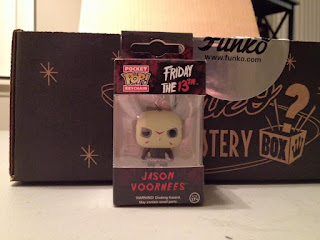 Ahhh...the Pocket Pop! Yes! Mrs Voorhees' baby boy himself, Jason! It was fate! Of course we'd end up with at least one horror icon. I'd prefer Freddy, but I'll accept Jason as an easy victory! 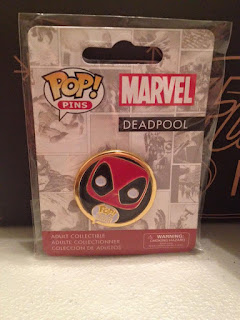 The pin isn't too spectacular. It's Deadpool, who I like, but I'm not crazy over. I prefer his old X-Force days where he was Spider-Man with a gun and swords.


Ok, so that box was pretty spectacular! A truly spectacular package to be assured. It's gonna be a hard box to beat, but I'll give it my best: 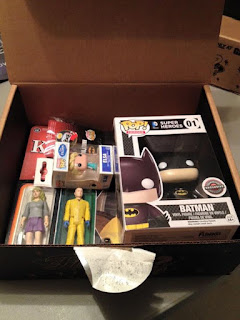 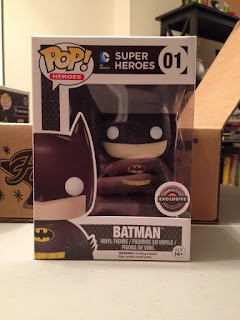 I had been hoping for a Batman 89 since I started my Funko Collecting so I'm very happy to finally own one! Sure it's just an all black repaint, but look at it. IT'S KEATON'S BATMAN.
Now I just need a Bob the Goon. 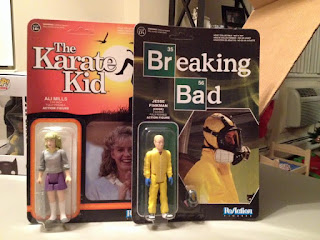 The ReAction figures were also a nice score! Another Jesse Pinkman and Ali from Karate Kid! Woo! Karate Kid is one of my faves and I have Daniel and Johnny hanging up, but to be perfectly honest, Ali(well, Elizabeth Shue in general) always annoyed me. But I guess I have to keep her by default. Plus, you never know when she could do a convention. 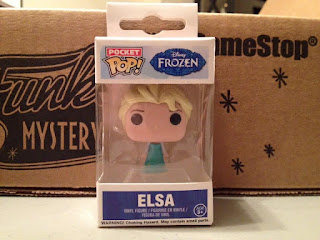 The Pocket Pop turned out to be Elsa from Frozen. Now, I'm normally an Princess Jasmine kinda guy, but I know what's hot. Frozen may be one of the most popular Disney movies I've ever seen, and my love of Disney forbids me to say anything negatory. I will say, if I got Olaf, I probably would've been able to sleep better. Snowmen, son. 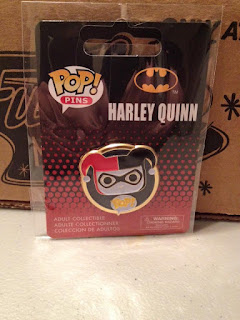 And rounding out the box was a Harley Quinn pin. Two of the most popular comic mascots represented in these boxes in pin form. Not bad, actually, especially  considering Christmas could lead these pins to becoming fun stocking stuffers for friends!

So, are these a hit? In my opinion, YES. These are awesome. Didn't walk away with a gold one, but hey, we both got Funko's we liked! So really, that's what matters!

I don't know if they're going to be a monthly offering through Gamestop, but if they are, I'll gladly be lining up early to get these.

Also, check out your local Gamestop. Maybe there's a few leftover boxes in stock! Who knows, maybe you'll get a golden Pop!