on October 28, 2015
I love the whole Masters of the Universe mythology. The action, scifi, horror, all rolled into one awesome cartoon and toy series.  If you were a young boy in the 80s, there was no bigger hero than He-Man.

That said, for every awesome hero, you need a lot of cool villains and Eternia was filled with them. Skeletor was cool and all, but his cartoon persona was just so weak and made him came off like a sissy. But come 1985, Hordak and his troop of The Evil Horde stormed the scene and gave us someone even cooler. Hordak ruled with an iron fist and a gaggle of monster sidekicks trampled over the previous bar set by Skeletor and his henchmen, even if he was relegated to being the villain in the She-Ra cartoon (not a bad thing, mind you!). That's how I like my villains. Unapologetic, raw, and downright evil. Hordak embodied all those things and more. So today, I'm paying tribute and ranking the Horde toy roster.


Trust me, though, if it were up to me, I would've traded Mosquitor for Leech in an instant. 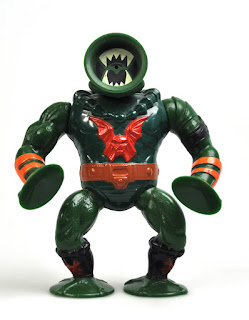 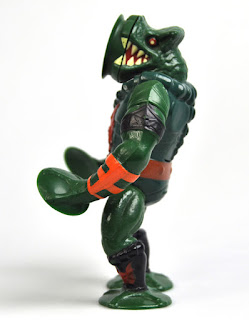 While Leech was marginally better in the original Filmation cartoon, using his power to drain people's energy with his hands and mouth, but his figure was kinda lame. Leech was known for his suction cup hands and mouth which made for a cool car window decoration but as a figure, kinda fell flat. But don't worry, it'll get better very soon. 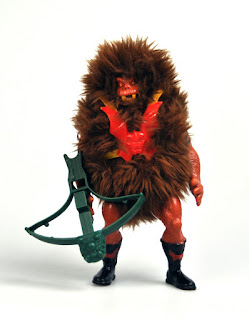 I always liked Grizzlor a lot more than I liked Beastman (blasphemy, I'm sure) and had Beastman looked like this instead of the orange creamsicle goofball we got, maybe I would've liked him more. Grizzlor had bonus points because he was a giant furry mess. It was kinda like having a rabbit as a MOTU figure. He was just so soft! Sadly, he's in 4th place, only because if you got his fur dirty, or threw him in the Slime Pit, which was VERY easy to do, it was a pain to clean. So plenty of Grizzlors were thrown out or shaved. Which is weird looking. See? 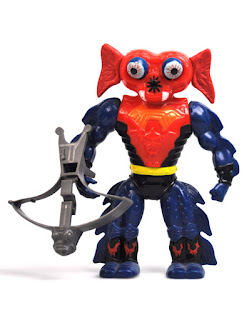 Ahhhh, Mantenna. How I loved him. A weird spider/bat amalgam which giant bulging eyes. He was used as the evil spy for the Horde who could spot their enemies many miles away. My only issue was that his eyes periscoped maybe half an inch or so. While that bothers me more than Grizzlor's fur problems, Mantenna's design was just too great. Plus, look at him and tell me you don't want him on your desk at work. 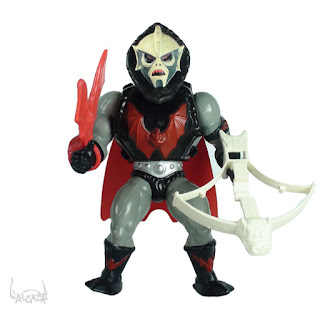 I said my peace on Hordak early on in this article. But, honestly, check him out. He has a pet bat, a skull bow and arrow and a cape! A CAPE! As a kid, I found it very tasteful for this maniacal overlord to have a cape. Not only was he a trendsetter by replacing skulls with bats, but he also started influenced his star pupil to wear capes. After this figure hit, Skeletor had a cape in the movie and The New Adventures of He-Man. Who's the real boss now? 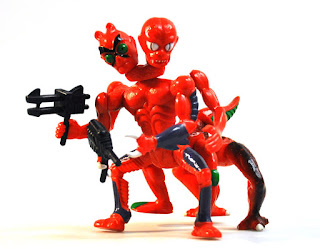 YES YES YES YES YES YES! Modulok!!!! One of my favorite figures in the entire MOTU lore. Modulok was a weird two headed demon/fire ant/devil character that had four legs, four arms and a lot of creativity. Why? Well, look below: 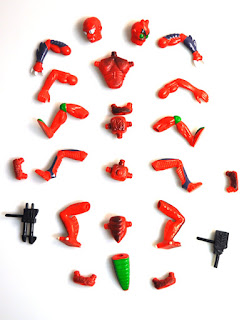 Yup. Modulok came with a boatload of body parts so you could create your own wacky creation. Kids love being able to come up with their own figures and characters and this way, they could achieve toy greatness. Remember taking body parts from several GI Joe figures and swapping them out to make your own soldier? This. Was. EVERYTHING.

Modulok was definitely a memorable figure and became pretty popular. So popular, Mattel tried to replicate it with MultiBot a year later. While Modulok was awesome, MultiBot...wasn't. But Modulok stands head and shoulders above the rest of the Horde and probably a lot of the other figures in the original MOTU line too.

So there you have it. My favorite subset of the MOTU line. The Evil Horde definitely didn't fool around and made their presence known almost immediately and, in my opinion, gave us toys that were even better than the original villains.

Not only did Hordak have good taste in George Romero-esque monster henchmen, he also had great taste in headquarters. Behold the Slime Pit: 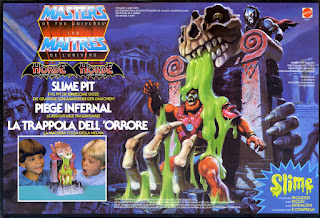 And the Fright Zone: 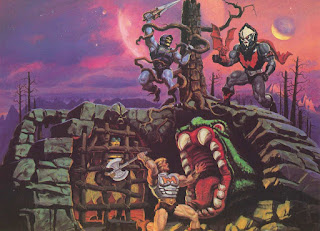 Again, while I love Snake Mountain a LOT, these were two of the coolest playsets ever. In fact, I'd argue that they were the most horror-influenced toys of the 80s.