on July 12, 2015
Well, Olive Films is at it again. They just keep releasing some obscure and forgotten favorites that we've always been hoping to see get a bluray release. And the movie I received from Olive Films, Roller Boogie is one of those movies. I had never seen it all the way through before, so I jumped at the chance to not also get a screener but also expose myself to a new movie that I've always heard fun things about. The story of Terry, played by Linda Blair, wanting to achieve roller skating greatness while her favorite roller rink gets threatened by a bunch of mafia guys is a pretty straight forward story. In fact, it's a been done by other directors with fads. 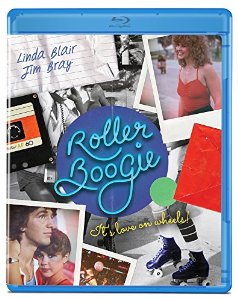 While I really wanted to like this movie, I didn't. Unlike Thrashin', I didn't grow up in this era and didn't have any emotional attachment to any sort of the story, nostalgia, or location. I haven't been a fan of roller skating since I was about 5 but I figured since I'm a fan of cult classics and the weird films that are from this era, I'd be a fan.

So what else didn't I like? Well, almost everything. My main issue was with Linda Blair. I thought Linda Blair bordered the line of whiny and annoying. Now is this her fault? No. She was still transitioning between Exorcist and was trying to establish herself as a more serious actress. Which, every child actor tries to do. So, a bomb here and there is expected. The dance routines and love story between Linda's character Jim Bray's character also seems a little boring at times. The movie's pace seems kinda slow too. There's times in the movie where I just looked at the counter on my bluray player and was amazed at how little time had gone by. The movie is 1 hour and 40 minutes but seems a little longer at times.

Now that said, there were things I liked. The transfer of the movie, as expected, was perfectly crisp and clear with great sound. Kimberly Beck's spoiled and whiny character was pretty enjoyable. The disco infused soundtrack was a perfect fit for the movie. And while I don't feel any emotional attachment to the SoCal area, it always seems to be a perfect spot for movies like this and does make me want to go out and visit. Fans of SoCal and Muscle Beach get a nice glimpse into the style and culture of that time. The cover is another bonus, as I can't say I was a fan of the original poster art, so while I'm not a fan of new covers, this one works for me.

I can see where the effort was put in, it just didn't work out. To be fair, by the time this movie was released, disco and roller skating was on it's way out and was passe.

So do I recommend this movie? Personally, no. It's kind of hard for me to sit here and lie and tell you it's worth watching, but in my mind, it's not the best movie you could put on your shelf.  But, if you're a fan of roller skating movies, disco music and culture, or have a fondness for the 70s, I suppose this is a good movie for your collection. Movies like this and Xanadu have their audience, just not with me. At the same time, my older brother grew up as a BMX and skateboard enthusiast, so a movie like Thrashin' would be what I pull off the shelf before I watch this.

If you do have any interest in this movie, you can order it from the fine folks at Olive Films, click here.