I won't even start this with a snappy opening. I just want you to soak this image in for a second: 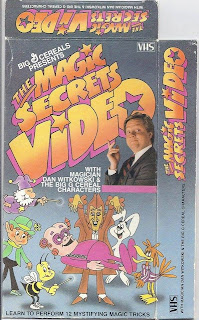 Yup. Check this out. A General Mills mailaway premium starring your favorite General Mills characters and a magician by the name of Dan Witkowski revealing the smoke and mirrors behind his mindblowing magic. Oh yes. With 2 proofs of purchase and 7 bucks, this tape was yours. Now, obviously magic is an interest of those young at heart, so if you were 5 years old in 1987, this tape was for you. Thankfully, I grew up in that decade with plenty of silliness and over the top children's programs like this, so I'm not walking into it blindly. I was pretty much expecting this to be a magician in a studio using the costumed characters as stage hands. But that was not the case. No, no, no. My lofty expectations would soon be demolished within the first frame. 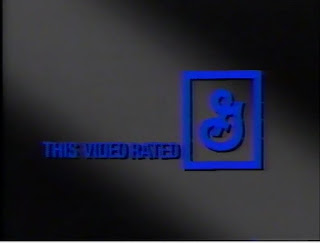 This starts off innocent enough. We start with the Trix rabbit taking a brisk afternoon stroll. Well, he was until he was intercepted by a lost, but rather jovial truck driver. Looking for the local theater, he turns to the first being he sees which happens to be a felt rabbit who sounds like he's high out of his mind. The trucker fooloishly confides in Rabbit, letting him know that his truck was filled with "a whole lotta tricks". His mind wanders at an alarming speed. After giving him directions, he decides to follow him on his quest for Trix-Topia.

The Rabbit, now wearing a fake beard, sneaks his way into a theater where two children and Billy Mitchell are enjoying the magic show. If this were today, Rabbit's talking during the show would result in a destuffing and a kick in the butt.
These kids become more invested in this show and the secrets behind the show than the one track minded Rabbit, although, I'm sure he was still on a Trix high, so it's hard to blame him. After seeing through his cheap beard. they invite him to stick around and enjoy the show. But, his mind is still on his cereal. Maybe he'll change his tune... 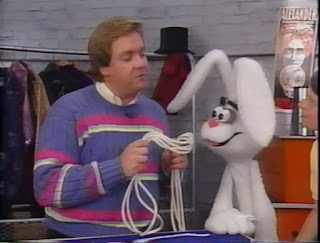 Our magical friend, Dan, invites the kids and their lagomorph friend backstage. This is where the video starts to take form. From hereon out this turns more into a magical demonstration with Dan and the kids while mascots stop by for a gag or two. I'll skip out on the magic tricks and head right to the appearances of the characters. Because as fun as this tape is, the real pull is watching the cereal mascots cause innocent mayhem.


The Cheerios Bee is our first mascot we meet. The Bee just kinda sits on a top hat and plays the off-stage assistant, showing and revealing certain tricks. He's the least of our worries, but we come back to him quite often. In fact, I gotta say, his presence is rather inconsequential to the rest of the tape. He doesn't really do much other than make a joke or two regarding the previous magic trick. That's it. But I guess that's better than flying around hitting people with a giant spoon filled with honey and Cheerios.

Now, to clear up any doubt, yes it kinda looks like he's sitting on a toilet, and then I realized "Duh, he's a bee. He has to be on a giant top hat.". The logic kicked in. HE'S BIGGER THAN THE HAT. Cereal mascot or not, my normal rule of standing still when a bee flies up to me would not apply. I'd be chasing him with one of those slime guns from Ghostbusters 2 in an instant.

Next up is Sonny the Cuckoo Bird. Now, Sonny isn't exactly Vanna White, but he really tries. Sonny's wackiness comes in handy as he brings the funny between scenes. Bringing the much needed comedy that Rabbit failed to deliver on, he either screws up the camera angles or the signs themselves. I'd rather see Sonny try his hand at physical comedy. Trix Rabbit just didn't seem to put his heart into his comedy. But then again, when you're main gimmick is being crazy over chocolate, you've got much more tools to play with.


Lucky, who was hiding in a trunk, waiting for Lucky Charms to be mentioned. Which, for a leprechaun in Minnesota, has got to be a rather daunting existence already. Lucky, much like the other mascots, just kinda feigns interest in the tricks Dan brings to the table and spends more time thinking about his beloved cereal. I'm getting the sense these tapes were made just to afford rehab for Lucky and Rabbit, because their attention is on nothing but dat cereal tho.


Now we're talking. The much anticipated appearance of Count Chocoula and Frankenberry. This is what I was looking forward to the most. The other mascots were fun to see, but quite come on...it's COUNT CHOCULA AND FRANKENBERRY.

Alright, so no Boo Berry. But I don't really think it detracts from the appeal of the Monsters showing up. I'm sure it would've been great for all three on stage, but it works fine with these two. Count and Frankenberry seem to be the perfect stagehands, until Frankenberry starts tickling the magicians assistant's feet. Quite disturbing, Frank. Shame on you. Be a little bit more considerate to this young lady's personal space.

The fun continues after the act when Count and Frank decided to take their bows and each character decide to fight over the applause and get into an attention seeking bowing-contest. Eventually, the pressure of fame becomes too much and both fall to the floor.

I couldn't ask for more from this segment. And yes, I say that with 100 percent honesty.

Now this one was a shock to me. The Smorecerer was not a character I remembered. And for good reason. He was apparently the mascot of S'mores Crunch for a very brief time. And on top of that, I never had S'mores Crunch as a kid so my knowledge on the cereal or the mascot is just what I'm seeing on this screen. I'm sure the cereal was delicious, and I'm sure our elderly wizard friend was a delight in commercials, but unlike the others in this video, it just wasn't meant to be a part of my childhood.

That said, the Smorecerer plays the curious old man in this segment about a mysterious rattling box trick. Attentive, he tries his hardest to crack the mystery, but comes up short. He's pretty loveable and endearing in his quest to find out why his magic is not up to par with Mr. Witkowski. I'm hoping that a proposed sequel to this tape featuring these two 80s magic superstars was being planned, but I have serious doubts.


Finally, the gang comes together for once last trick on stage. The children and mascots come together with anticipation as they witness the disappearing assistant trick. Always a crowd pleaser. Dan takes us behind the stage and reveals his greatest trick in flawless fashion. I'd try to describe it, but I'd just ruin it completely. And you'd lose faith in magic as a result. 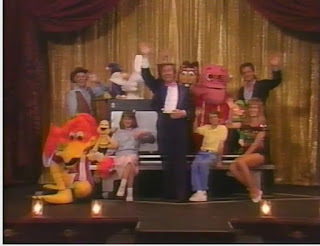 Following the final illusion, Dan and his crew wave goodbye. A sad goodbye, as I'm sure some of them really had a great time this afternoon of magic and hilarity. But, thems the breaks. I'm sure Dan had another gig that afternoon and the mascots had commercials to film. The kids? Well, I'm not exactly sure where they went, but I'm assuming they went on to become The White Stripes or something.

Ok, so I was pretty snarky at times with this tape. But, it's all in good fun and based in love. My expectations were kinda low since I had never heard of it before and I was more than blown away when I discovered the lengths Dan Witkowski and General Mills went to make sure this was anything but forgettable. Dan, who seems to continue his magic business to this day, seems to have a lot of fun in this video and not in a forced kinda way. You can tell his passion for entertaining and teaching the magic behind the magic (that can't be the right way to describe it, can it?) shines through. He's like the Mr.Wizard of magic. I definitely would've watched his show as a kid and gotten a kick out of it.

While it's not the most widely circulated tape and most talked about slice of nostalgia, it's definitely a fun watch. I'd highly suggest watching this, because it is entertaining. One way or the other, you won't forget it. I kinda hope General Mills finds a way to do something like this again, it could be a lot of fun to see another special featuring these characters. I'd love to see Count Chocula and Frankenberry fight over attention on a cartoon or something. There's a lot of potential with these characters.

And of course I can't write this without the biggest thanks and gratitude to reader Daniel Goodroad who went out of his way to get me a copy. This article couldn't have been done without your help and I'm so appreciative of your assistance. Thanks Daniel! I can honestly say this was the toughest yet most enjoyable project I've ever worked on.