on December 15, 2014
I really have no better way to start this entry. It's a pretty special one for me. Today's entry is dedicated to my favorite childhood movie, The Wizard, which celebrates it's 25th anniversary today! 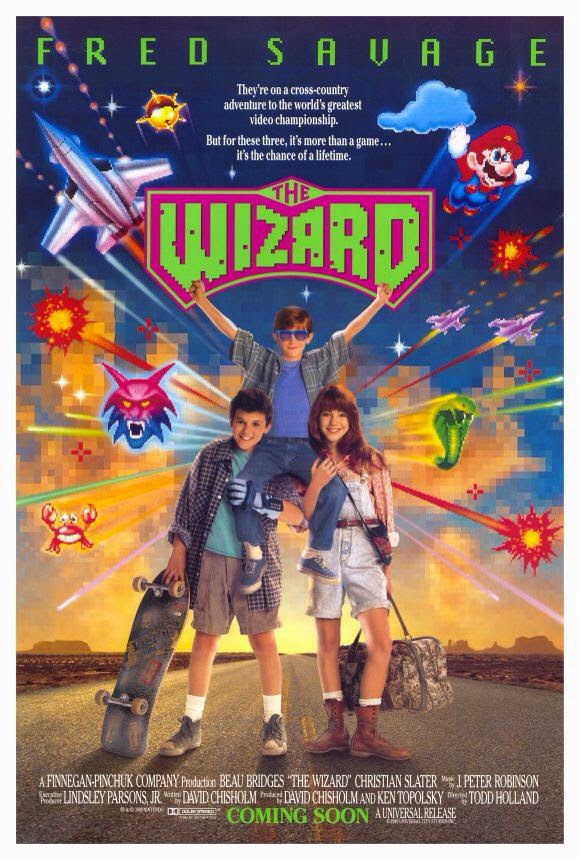 In case you're new to the internet or you were born yesterday, allow me to give you a quick synopsis of the movie. A young boy named Jimmy who suffers from developmental disabilities was put in a group home but escaped via his brother played by the always awesome Fred Savage and went cross country to participate in the Video Armageddon. Along the way, they encounter many diverse characters(as diverse as you can get in a family movie from 1989) and wacky situations that culiminate in an event proving that, yes, Jimmy is the greatest video game player of all time. I have pretty fond memories of this one, as with everything I write about. Seeing this at the right age definitely helped me appreciate it. It's not a movie that's going to win awards, but as a kids movie, it hit all the right buttons. No pun intended.

There's really no way I can describe it properly to those who weren't around to see it upon it's first release. It's definitely a time capsule of all that was trendy and popular in the late 80s. Especially Nintendo...ESPECIALLY NINTENDO. And since my household at the time was a Nintendo family(despite my brother owning a Sega Master System) this was a perfect chance for the family to get together and sepnd the day with Fred Savage. Much like many other family movies at that time, it has it's cheesey moments and moments that make you go "argh!". But it's a still a fun movie that you really need to see. My job today will be to present you with 5 reasons why you SHOULD tune in. 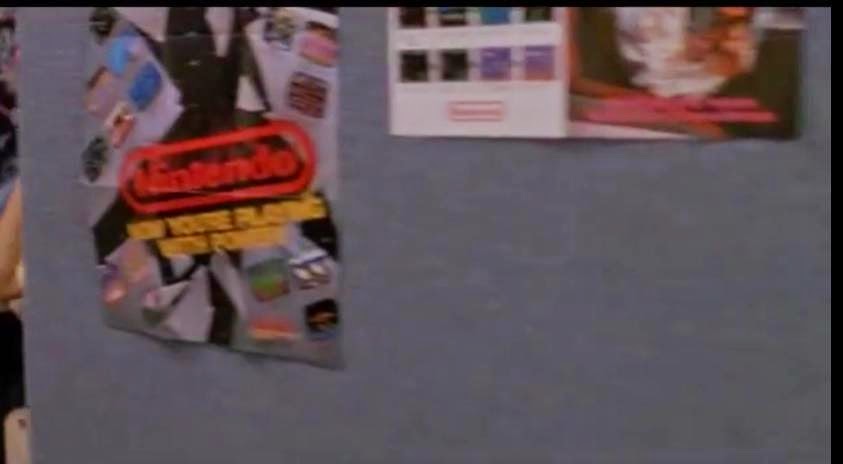 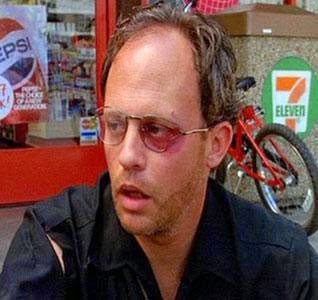 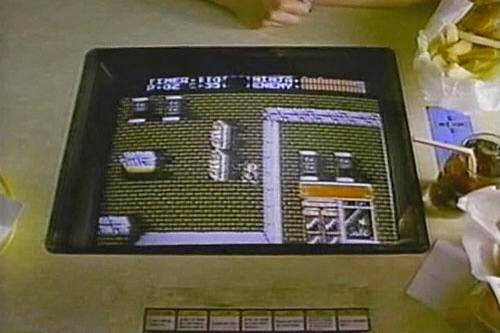 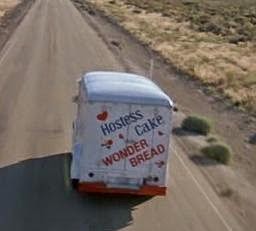 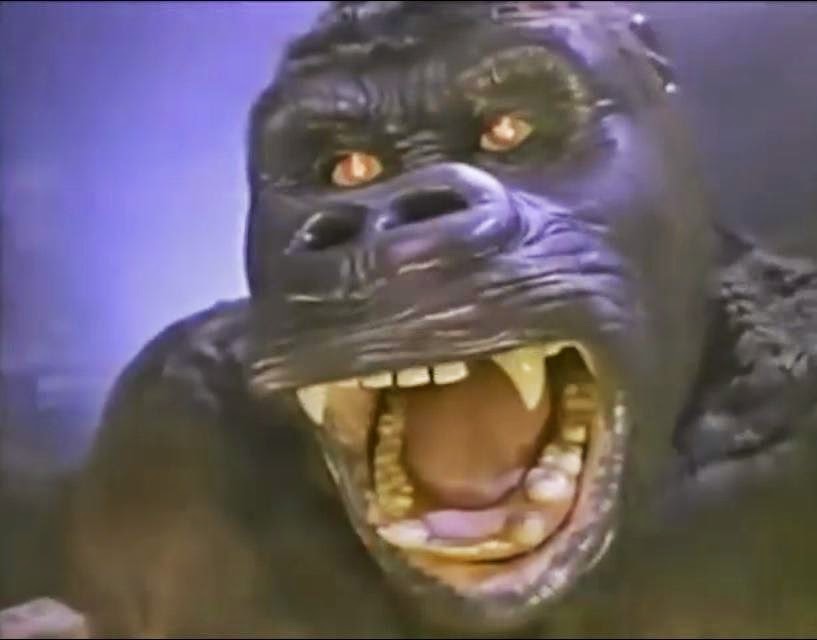 My gosh, there's more advertising in this movie than a Super Bowl. This was clearly meant as a Nintendo movie, but there are other distractions to note. Universal did it the right way. If you had pumped this movie full of crap that kids wouldn't have cared about like Forbes magazine, Olive Garden and those goofy Gator shirts, the movie wouldn't have been as memorable. Now Pepsi? 7-11? Hostess? Vision Streetwear? Now that got our attention. And if you're a nostalgia addict, it's even more fun. Also, as a fan of Universal Studios theme park, seeing all the cool scenes filmed at the California park was an added bonus.

Oh man! That soundtrack was a mish mash of current pop bands and an oldie or two. "Send Me An Angel(1989 Version)" by Real Life , "Hangin' Tough" by New Kids on The Block, "Don't Be Cruel" by Bobby Brown are just some of the songs on the soundtrack that really summed up that era in pop music. It's not the easiest soundtrack to locate mainly because an official soundtrack wasn't released(to my knowledge) but a fan edition called "The Video Armageddon Edition" featuring various NES songs as well was created a few years ago. It's a pretty fun collection, but I'm sure pretty soon you'll find one... 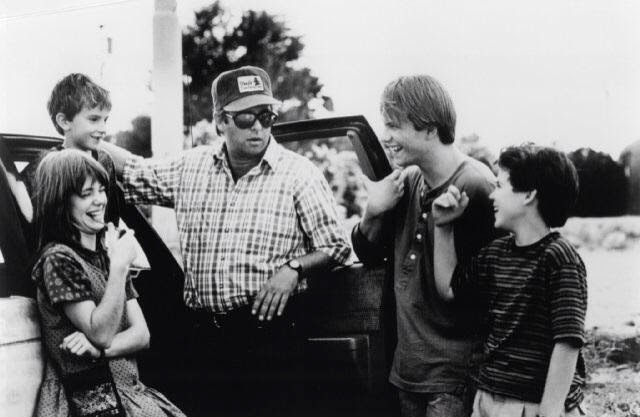 Look at the cast! Fred Savage and Christian Slater alone were pretty hot at that time. Jenny Lewis and Luke Edwards weren't known just yet and wouldn't have the same career as Savage and Slater. Beau Bridges who plays the father of the Woods clan, well, his career has been pretty stellar and at this point, I'm sure he was just looking for a fun movie to star in. The cast works pretty well together and Fred and Jenny play off each other in a fun, conflicting way. 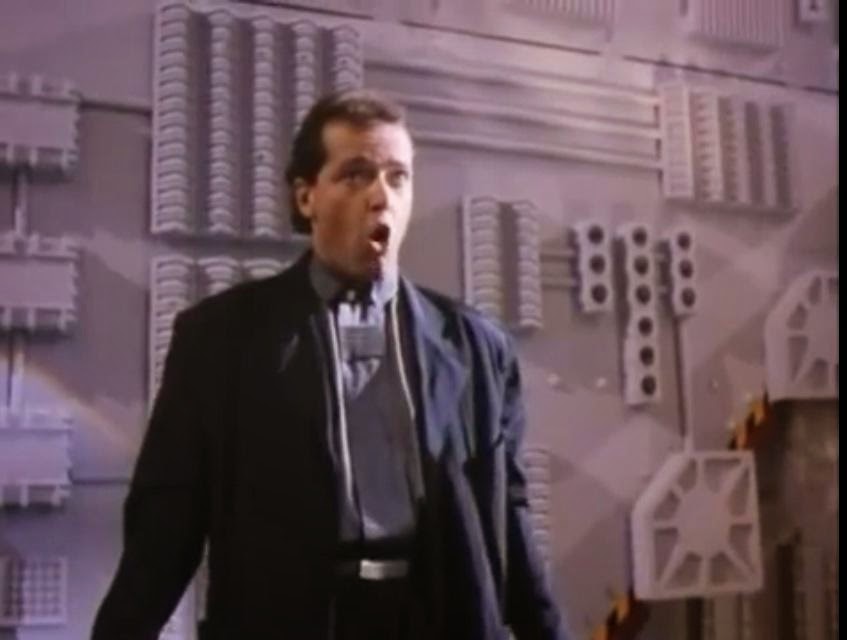 As great as the cast of characters are(Mr. Putnam, I adore thee), my favorite character was the over the top Video Game Announcer played by character actor Steven Grives. His ridiculous announcing and general goofiness was something that always made me laugh. And of course, when he announced the video game in the finals of the VGA, our lives changed forever... 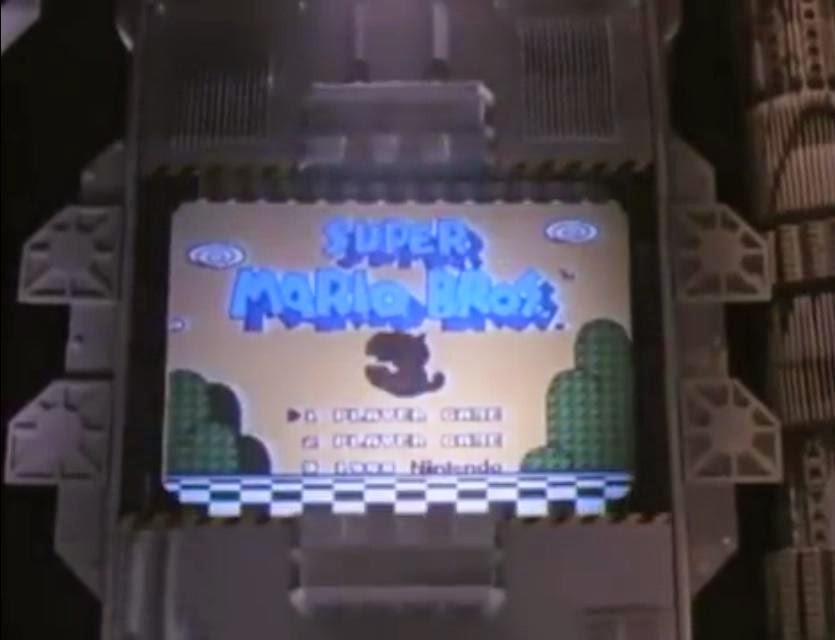 Ok, this has ALWAYS been disputed. I'm a firm believer that I discovered Super Mario Brothers 3 before the movie came out. Maybe my timeline is screwy here, but I'll go to my grave claiming that, even if others have claimed differently. Either way, let's face facts, Super Mario Brothers 3 was the greatest game to hit the NES in it's illustrious run. It definitely cleaned up the mess left by Super Mario 2(which, I kinda enjoyed) and left people very satisfied. So many different aspects of that game including mini-games, awesome new powerups and disguises for our hero to get through that crazy universe of his, and of course more Bowser. This game generated so many sales and more importantly, so many cherished memories for anyone in our generation. In fact, it's not uncommon for someone to say this was their favorite NES game. 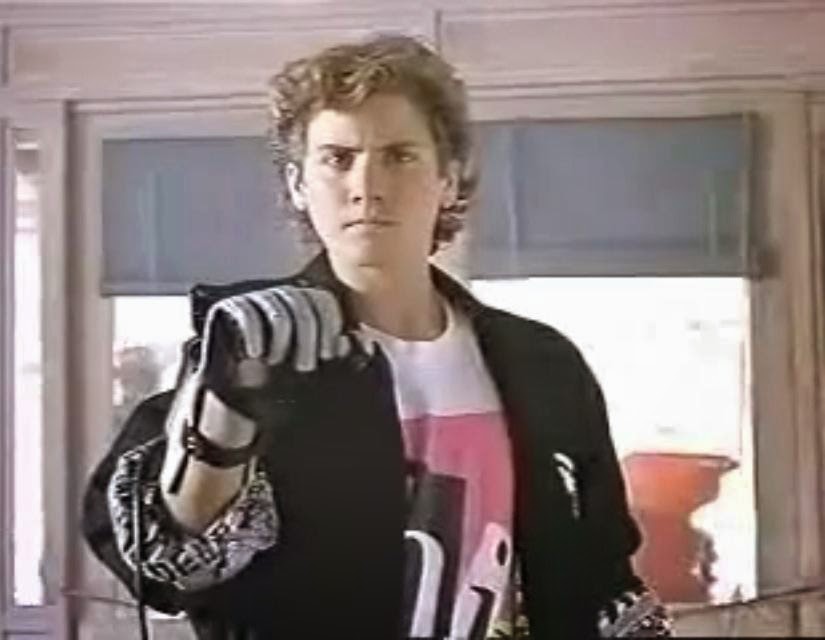 Of course, I can't write this entry without mentioning the Power Glove scene. As cheesy as it is, in reality there was no way this scene could be taken seriously. A 12 year old boy wearing a shirt that resembles newspaper with that goofy looking haircut can't really deliver a line and be considered badass. It really cemented my love and envy of the Power Glove, the one component of my video game childhood I never owned. Despite my friends telling me it never worked, I still wanted it. It just looked so...so...bad! Years later, I'd eventually try it on and goof off with it, but it wouldn't be the same unless I could go back in time and destroy the record in Rad Racer. If time travel des happen, I know what my trip will be for.

So there you have it. I really do love this movie and alongside Ninja Turtles and GI Joe The Movie, is one of the very few movies from my childhood that I can continue to watch and get entertainment out of. It's also a movie that has garnered such a massive fan following from nostalgists to video game fans to lovers of goofy, offbeat movies. It's really a fun time for anyone, no matter what your reasoning for liking it may be. Some day, I hope it gets the bluray release it deserves. I get the sense I'm not the only person who would drop dime on a copy!

That said...since it's the holiday season and you guys helped me hit my goal of achieving well over 1,000 like son the Facebook page, I'm in the giving mood! My goal of this entry was obviously to spread word of this movie on it's 25th anniversary, so I'm giving you a chance to win a (unofficial) Wizard prize pack! Check out the goods! 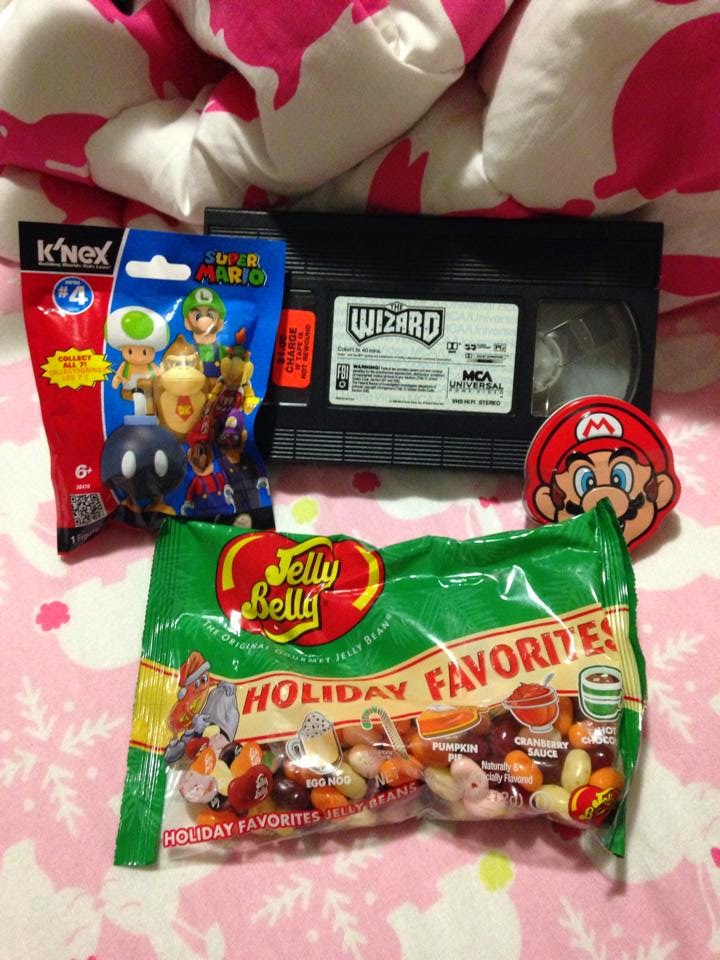 A Wizard dvd!  Um...yeah, I know that's a vhs copy from a previous entry(plug: read here!), there's a good reason. I ordered a copy for this and of course being the holiday, there's delays in the shipment so I couldn't receive it in time. But be aware that you'll recieve a brand new, unopened copy of The Wizard on dvd. The vhs, will stay with me though. Sorry to lead you on.

Rounding out the prize pack is a Mario candy tin container, a Mario blind bag figure and a bag of Holiday Jelly Bellies. Yeah, ok it has nothing to do with the movie, but it's the holidays, so why turn why not stay in the spirit somehow? 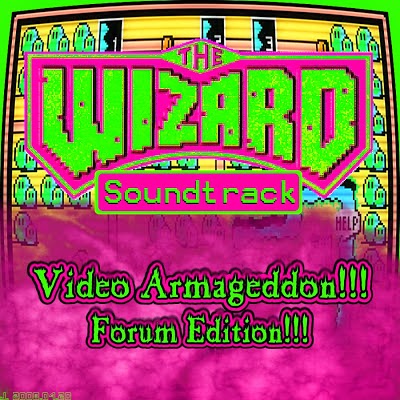 The infamous Wizard Soundtrack "Video Armageddon Edition" that I had discussed earlier will be included as well. A cd-r featuring the best songs from the movie as well as the rare "Dart on the Map" score! What better way to drive to work than channeling your inner joy stick hero?

Allright! So how do you achieve such badness? Simple!

2.) Tell me what your favorite childhood movie is to this very day. Is it Dark Crystal? Lion King? Sandlot? What is it? Tell me in the comment section below please! And please don't forget to leave your email address in your comment. I need that for contacting you if you win!


I'll pick a winner at random on December 29th, so comment now!

-Chad, who sadly has the video game skill as a newborn.


Obviously this giveaway is in no way sponsored or endorsed by Nintendo or Universal or anyone else.