25 Years of Saved By The Bell! 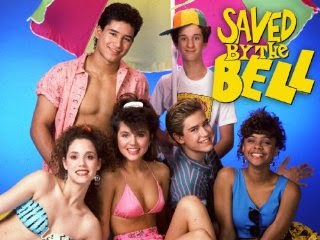 Today marks a huge milestone in tv history. Well, that may be a little too much of an exaggeration but if you're a member of my generation, you'd probably be more inclined to agree. You see, 25 years ago today, Saved By The Bell debuted. Yes. That's right. Feel old. Because I certainly do. Sure, we celebrate 30, 25 and even 10 year anniversaries of movies and tv shows, but I have a hard time believing I've spent 25 years obsessing over Tiffany Amber Thiessen and dreading Screech appearing. But it's true. It's all true. 25 years ago today, NBC rolled the dice and hoped for a hit and they got it. Well, kind of. The first season was crapped on by critics as being too hokey and silly. But the kids loved it and with in a few years, it changed Saturday morning forever. Cartoons, which some would argue NBC was king of Saturday morning cartoons(me included), were gone and in their place were a variety of kid and teen friendly sitcoms featuring similar characters and situations. California Dreams, Hang Time, City Guys. Heck, even USA got into the mix with their own version called "USA High". Now, as someone who sat there and watched the majority of these while waiting for wrestling or something else, I can tell you they were pretty awful. The original Saved By The Bell cast was a hard act to follow, even to this day. 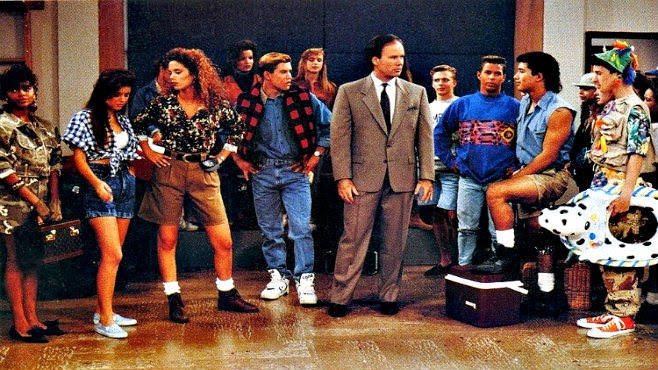 Now, I should be able to sit here and tell you that Saved By The Bell is, at this point in my life, only a nostalgia trip. That's all it should be. Nothing more, nothing less. Just a show that I watched as a kid every Saturday morning from 1989 to 1993. End of story. I shouldn't be telling you that since 1989, it's been one of my favorite shows to sit and watch and just enjoy. A comfort show, if you will. I shouldn't have extensive knowledge of characters, stories and irrelevant information like that.

But I can't. And I won't. Because that's a lie. And lying is naughty.

The fact is, I love Saved By The Bell with all my heart. It's just the way it is. There's just something about this show, that I can watch a quarter of a century later and still get a smile on my face. It's a show that defined entertainment in my generation. For 5 years, everyone my age and up stopped what they were doing on a Saturday morning and for a half hour and indulge in the silly plots and goofy dialogue. Yes, even at that time the situations were a little silly, but it worked. It continues to work even to this day. Even if it's as cheesy as Jessie being addicted to sugar pills, Zach trying to get out of class or the gang driving home drunk after a party. It didn't matter. The charisma and charm of the everyone involved was more than enough for us to stay tuned in. These were more than just characters as kids, they were actually a part of our lives. As the series continued, we were growing just as much as they were as well.

This show has stayed with me well past the age of ten. I'm alright with that too. Despite the College Years, The Malibu Sands and Tori(no one can ever replace my beloved Kelly Kapowski, you hear me?), I accept thus show for all it's goofy flaws. Over the years, I'd catch the constant reruns on TBS at all hours. When I was 13 I was appalled to hear my friend Tim came over and when asked if he wanted to watch SBTB with me, he said "Sorry. My mom doesn't like that show and doesn't want me watching it". What?!?!? What kind of poor child was depraved of Mr. Belding? In 1996 too. It wasn't like last week or something. But it was a strange occurrence. I never really knew anyone who didn't like this show. It seems the show always had something for everyone. Whether it was the eye candy for the girls, the girls that us boys worshiped, the crazy fashion sense that is considered dated and tacky by today's standards, and of course who didn't want to head to The Max for a burger? I even tuned in for the two prime time movies aired on NBC. To this day, I still rock out to the Saved By The Bell soundtrack. Nothing helps get me through a rush hour like "Go For It"! And you can better believe if you say "Zach Morris Phone" to someone, they will get the reference instantly. Even the theme song, which has been my ringtone in previous years, is 100% memorable. 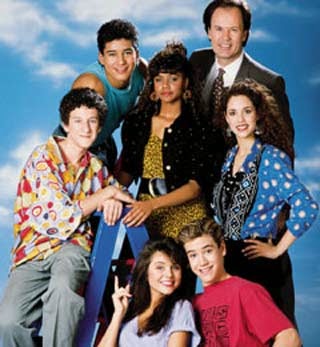 I've written about my SBTB love twice. One in a entry for Shit-Mas over at ShitMovieFest and one that was nothing more than just a gallery of Kelly Kapowski. But if you know me, for 25 years now, my love of SBTB is more than just two entries on a blog or two. It's a part of my life that no other show can really take. Most people stay loyal to their favorite shows from an early age. Well, Saved By The Bell is one of the few shows of my childhood I can continuously watch well into my 30s. Full House, Family Matters and other popular shows I was front and center for every week don't have the same effect. What is it about this show that still makes me smile? I don't know. But I know that 25 years later, there's plenty of others who share the same feeling and share the same love for this show that I do. And judging by the show's staying power through reruns and multiple dvd releases, I doubt this show will ever truly go away. Despite Dustin Diamond's disgusting attempts to disparage the show.

But it's allright...well, you know how the rest goes...