The Story of the Amazing Burger King Coupons

on May 30, 2014
This is a weird story to tell but it's something I've always wanted to write about and finally, 11 years later, I finally get to do so in the proper venue. One day after work, I went to the local library which was common practice for me. I'd sit there, go online or read a book and be left alone. It was pretty relaxing and since I didn't have a girlfriend and responsibility at all, I had nothing else to do other than smoke cigarettes and watch old copies of New Adventures of He-Man. Now, that I think about it, being 20 totally sucked. If I ever get a time machine, I should go back and smack my 20 year old self around for being such a obnoxious, lazy bum. And when I say obnoxious and lazy take a look at me circa 2003...

Yeah. Tell me you don't want to smack me. Anyway, so there I was at the library one day after work, just chilling out with a book and my portable cd player and I get up to leave when I stop by the used book section to see if any good videos or books were for sale. Not today, sadly. I was prepared to walk away when something caught my eye. Something just sitting there, collecting dust. Now, before you question it, I've come into this library at least 3 times at week and every day I go by the used book shelf and never ONCE have I seen this item. So I'm guessing either some old lady had been using as a bookmark or Doc Brown fired up the Delorian from 1989 and left this amazing artifact just for me. Either way, I grabbed it and walked out. My mind wondered to how it got there but I was more enthralled to discover that it was obviously meant for me to discover and cherish. What am I talking about? 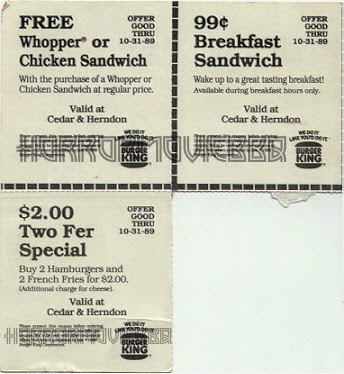 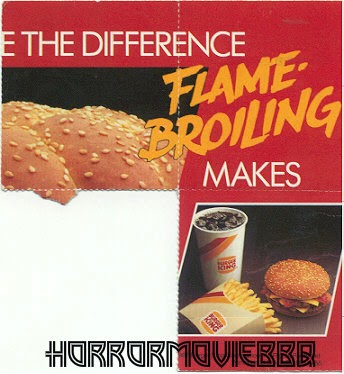 Yup. Old Burger King coupons from 1989. One used. The other three remained. Now, the taunt of attempting to use these at a local Burger King was always there just to see how it go over with the workers but I never did. Three coupons that offered 2 burgers and fries for 2 dollars, a free whopper or chicken sandwich and 99 cents for a delicious breakfast sandwich. My gosh, I've always said Burger King has been the leader of addicting fast food, but with these deals, you can expect a burger fueled stampede back in the day. I'm just hoping it resembled one of those old Royal Rumble posters.

Finding these coupons definitely made my day and remained on my miscellaneous pop culture goofiness shelf for years. I can't explain it much better than it was just a very random and weird thing to discover.

Sadly, before the move to New York, I went through boxes to find what excess odds and ends I could sell and further discovered that the coupons were destroyed and had to throw them away. Apparently years ago my cat Booklet decided that since he couldn't cash in on the deals, he'd at least try to eat the coupons themselves. I cant say I blame him. If I wasn't able to digest burgers and fries, I'd take my anger out whatever was in front of me. Thankfully, the scans, remain and forever archive it's existence.