The year was 1989 and the Tim Burton's amazing Batman movie was sweeping the entire nation. Heck, not just the nation, but the world. Fans everywhere were clamoring for a brand new Batman after 20 years of "Biff!", "Zammo!", and "Pop!" and Adam West dancing around like a fool. By the time Tim Burton got his creepy hands on Batman, the game changed. No longer was it a campy affair. No. This was some real serious stuff. Batman was finally being taken seriously all over again. It changed everything about the way we look at superhero movies. Without Batman 89, we wouldn't have the slew of DC and Marvel movies we do now. Although, DC still needs to get their butt in gear and kick off that Alexander Knox spinoff,(although, maybe he did move on from being a news reporter to becoming a Sports Agent?) I'll forgive them enough to consider Batman 89 my all time favorite movie and consider Michael Keaton the best Batman ever.

In the process of it changing superhero movies, it also changed how superheros are marketed. By 1989, most of our favorite heros were relegated to either Saturday morning cartoons, action figures, trading cards and a very small amount of chintsy toys available at the drug store. I for one remember a Marvel Secret Wars binoculars as a kid. Cheap, but they were pretty cool. (Although, why a superhero such as Spider-Man who need binoculars when he has Spider-Sense is beyond me.) Once Batman hit though, it was all open season for companies to get in the merchandising game. Action figures, trading cards and small cheap toys were still available, but everything else such as cereal, clothes, child size Batmobiles, gum, posters, shoes. And that's just the stuff off the top of my head. Between 1989 and 1992, if you could think it, it probably already had Batman on it. And let's face facts: we still remember the taste of the Batman Cereal. Today though, as much as I'd love to say I have a box of Batman Cereal to be opened and taste tested, I'll be covering one of my favorite toy lines ever. The Dark Knight Collection by Kenner.

Upon the movies release, rookie toy company Toy Biz(later known for their longstanding relationship with Marvel) tried their hand at action figures by releasing a "DC Super Heroes" line consisting of three characters from the movie(Batman, Joker and Bob The Goon) and the usual cast of DC Comics superstardom(Superman, Wonder Woman, Robin, etc.). And it couldn't be an 80s toy line without some vehicles and a playset. Thrown into the mix was a Batmobile, Batwing, a Batcycle and a Joker Van and a Batcave.  Make no mistake about it, these were a hot item. While the Batman figure with a retractable bat-a-rang belt was rather memorable, the rest of the line wasn't. In fact, it wasn't even Toy Biz's actual work. The molds for most of the DC Characters(non-movie) were just reused molds from the old Kenner Super Powers line. And not to mention, the cheaper production made the figures less inviting. This seemed more like an experiment or so just see what Toy Biz could do, and to be honest, they weren't that great. Once 1989 ended, so did Toy Biz's chance of continuing a partnership with DC. Because it seemed like another company was waiting right around the corner to pick up the license to the mega-blockbuster...


Starting in 1990, 80s action figure juggernaut Kenner, who had held the Super Powers license only a few years prior, took a stab at making an assortment of Batman figures as well. While Toy Biz figures were kinda cheap and bright, these figures were a little more on the higher quality and darker looking figures to properly suited the movie.  Instead of just releasing ONE version of Batman and ONE version of the Joker, Kenner decided to start a trend that would leave an impact of superhero toys forever: Variants. Yep. While Masters of the Universe created multiple variants of the same character, Kenner perfected the idea by rolling out so many alternate Batman figures. The Dark Knight Collection had several variants and versions of Batman and The Joker that didn't appear in the movie or...well...anywhere else. To this day, I don't ever recall seeing Batman appear in a comic wearing all gold. Now, I'm not saying these were bad figures. Hardly. In fact, it spiced up a concept that, by all means, should've ended after Toy Biz sent their toys out. But, the varieties of Batman and Joker were a hit for Kenner and the variants would continue over many toy lines and many years. 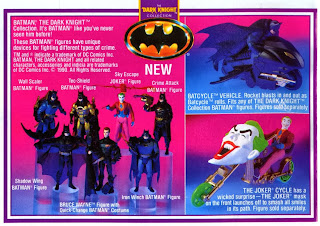 The figures accessories were a great draw too. Grappling hooks, rocket launchers, and small weapons were implemented to draw more sales in. And it worked. I can remember coming home from Kiddy City and tearing open my Crime Attack Batman and watched as he immediately went to to work on eliminating the terror of Sky Escape Joker. The only complaint I had as a 7 year old was their arm and knee joints didn't bend like they're Super Powers predecessors. Still, the sculpts and paint jobs for these figures were pretty darn amazing and couldn't be beaten. To this day, I'd gladly say the Bruce Wayne/Michael Keaton sculpt was one of the best sculpts to this day. Take a look at the likeness below.

These figures were quite the enjoyable playthings and still hold a special place in my heart as one of my favorite toys from that era. I had quite the handful including the Batmobile, which still ranks as my favorite Batmobile design. Many other vehicles were released in the line such as the Batwing, Joker Cycle, and a Batcave among others. The Batcave mold used in this toy line, would be used by Kenner/Hasbro for many years through many other Batman lines throughout the 90s and proved to be a pretty popular item. Although, in my opinion, the Toy Biz Batcave was my personal favorite of the two.


At the same time, Kenner was willing to offer children the opportunity to become Batman themselves with roleplay gear including a utility belt, a walky talky, binoculars and even a Batman mask to further the fantasy. And again, it was pretty cool. What wasn't cool was when we got in trouble for beating up our older brother while calling him the Joker. Sorry, Ian.


Interesting sidenote, apparently Robin and Penguin were to appear in this line as well. But according to James, writer of 1989Batman.com: "Initially the early Batman Returns figures were slated to be included in the Dark Knight Collection as its last wave. The packaging would have featured the large artwork seen on the Returns' package, but with the DKC logo. This might help explain why Robin and the repainted Super Powers Penguin ended up in the Returns line (since neither reflected what appeared in the film). Of course, this could have simply been Kenner's way of buying time until the Returns line was approved and ready to ship and these figures were intended to be the first wave of Returns all along...". So with that said, it seems Dark Knight Collection could've been a lot more of an "Expanded Batman Universe" toy line if continued. Maybe more movie-styled designs of comic characters who hadn't appeared in the movies could've gotten the Kenner treatment. But of course, with more movies, means more designs and more toy opportunities. Of course with the release of the Batman sequel Batman Returns, Kenner realized what a money maker they had and continued the variants well into the late 2000s over numerous Batman related lines. Eventually Dark Knight Collection ended and quietly merged into the Batman Returns line.

From 1990 to 2006, Kenner held the DC Comics properties close until it was time to move on. After a very long and fruitful partnership, DC Comics granted Mattel the license to their action figures. While the new figures are pretty amazing and fantastic display pieces, nothing will replace the fun and uniqueness of the Dark Knight Collection.

Now, if you'll excuse me, I'm seeing my Joker provoke that Shadow Wing Batman on the shelf and it can't end too well...

Much thanks and credit to James of 1989Batman. I couldn't complete this without his assistance and allowing me to use so much of his catalog scans and photos. Please check out his very informative blog for everything Batman.