on January 24, 2014
The Real Ghostbusters line was a thing of beauty. I mean, sure, it wasn't 100% accurate of the actors we saw on screen, but at that point, little care did we. In fact, I think we had gotten accurate movie versions, the charm wouldn't have been the same. Maybe I'm in the minority here, but I feel like the cartoon became a bigger hit with kids than the movie did. And why not? Monsters, mayhem, humor, and Egon. So when it was time to get toys, we got 'em alright! And they were amazing. Most boys in my age group and social circle had at least 1 of the Ghostbusters and one wacky looking ghost as well as a vehicle of some sort. And if you were real lucky, you had the Ecto-1 and the Firehouse. Now, I had a second hand Firehouse, but I still had it. Eventually Real Ghostbusters went beyond the call of duty and presented more stuff from the supernatural world. Possessed humans and crazy looking monsters spawned from the most demented minds at Kenner. Eventually, the line decided that it was time to have the Ghostbusters take on the Universal Monsters. Yep. Dracula, Frankentstein and his kin were taking on the crew. I mean, come on, Winston would be able to take on a possessed butterfly, but the Mummy? Ok, now we just got serious. This was an interesting take on the growing toy line and Ghostbusters folklore.

There they are. Pretty cool? Eh, ok. Not the greatest representations of the Universal Monsters, but it was still cool to see them in the line. All great characters of horror lore(although it still shocks me that Quasimodo was made). And while the Dracula was always the most popular one, I have to say my personal favorite is the Wolfman. I don't know whether or not it's his stance, his sculpt, his action feature, or whatever. But it was definitely one that stood out. 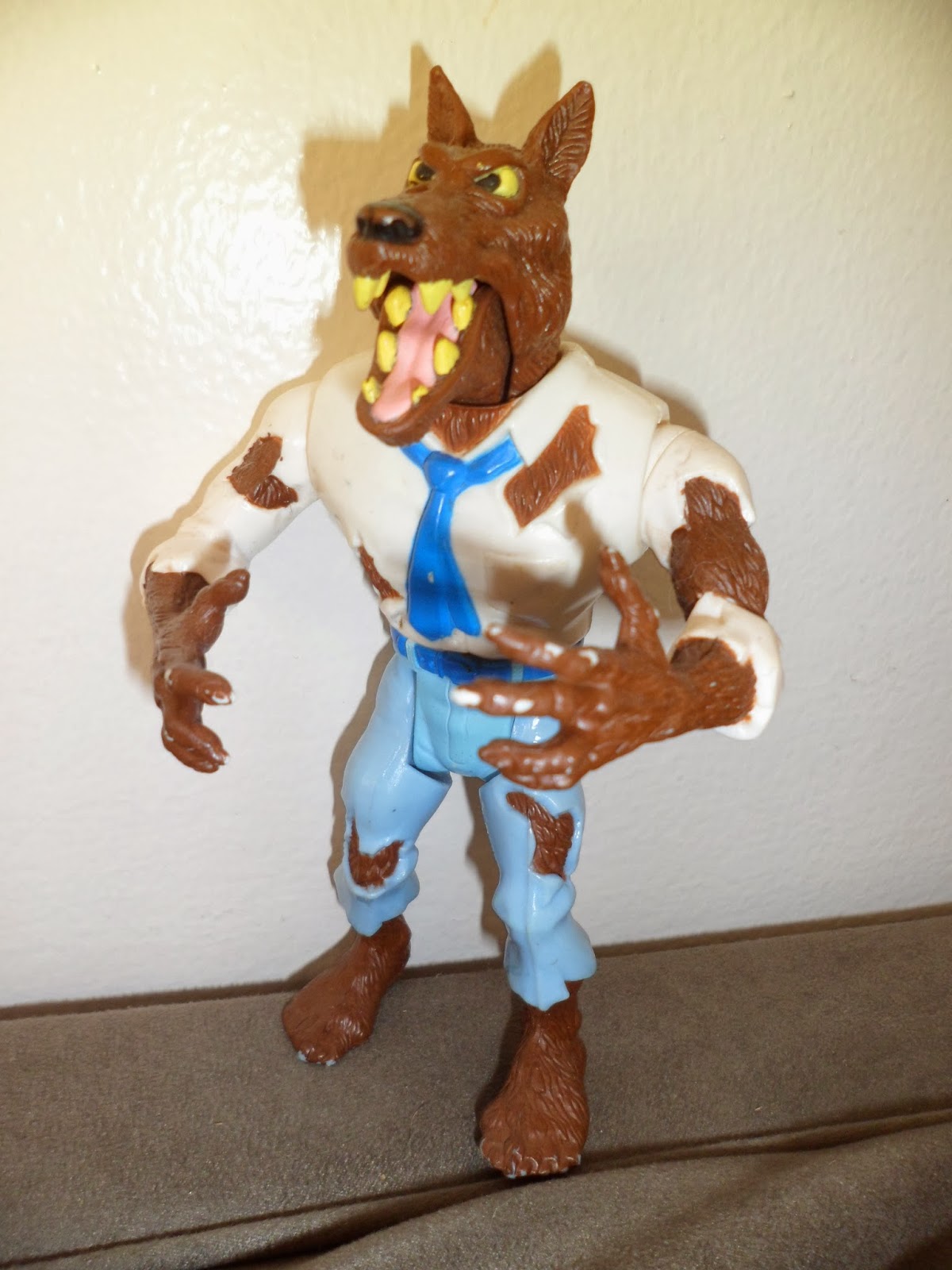 With his torn up shirt and messy jeans, you can tell he's been having a rough day at the office. Perhaps his coffee mug was stolen while the printer got jammed. I don't know, but cartoony or not, you still don't want to trifle with him. I'm feeling like while Wolfman has always been intimidating, this one is more of a cereal mascot. The sculpt and paint job is simple enough to make you want to grab him off the shelf and put him in your collection. His paws, teeth and snout are pretty well done. Of course, by the late 80s, most sculpts and paint jobs were as simplistic as you could get. I imagine most sculptors and designers were thinking toys had to be as kid friendly as possible. 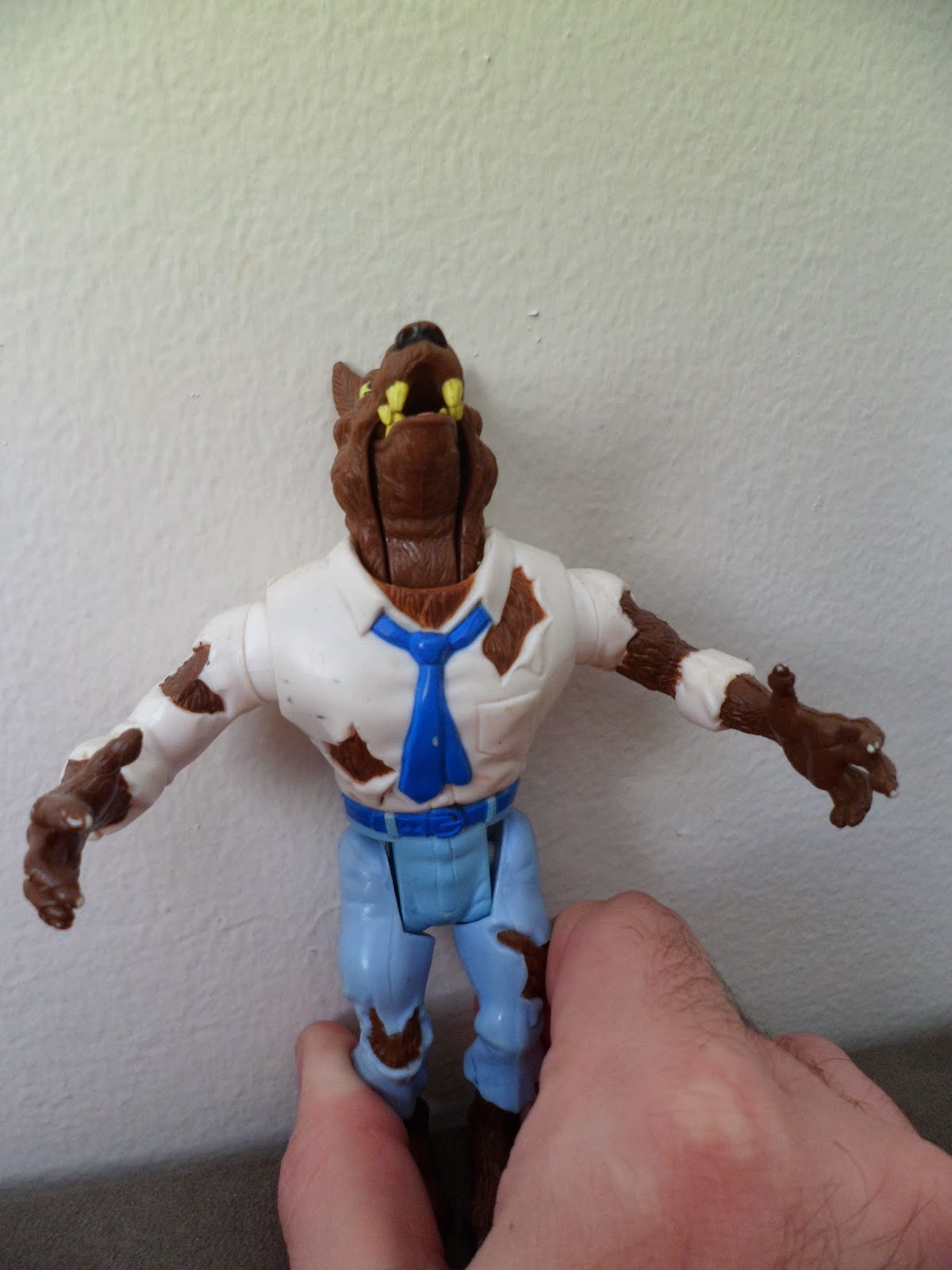 Again, while kid friendly, it still stood out. His actionf eatur emay be the most fitting in the entire line. You squeezed his legs and Wolfman's head cocked back and made him look like he was howling to the moon. The leg-squeeze mechanism had been done by this point throughout many figure lines, but this is probably the one that made most sense. Pretty cool, huh? Not in the least. My only complaint is he doesn't have a soundbite of him howling. It could've been done, but I won't lose any sleep over what could have been. 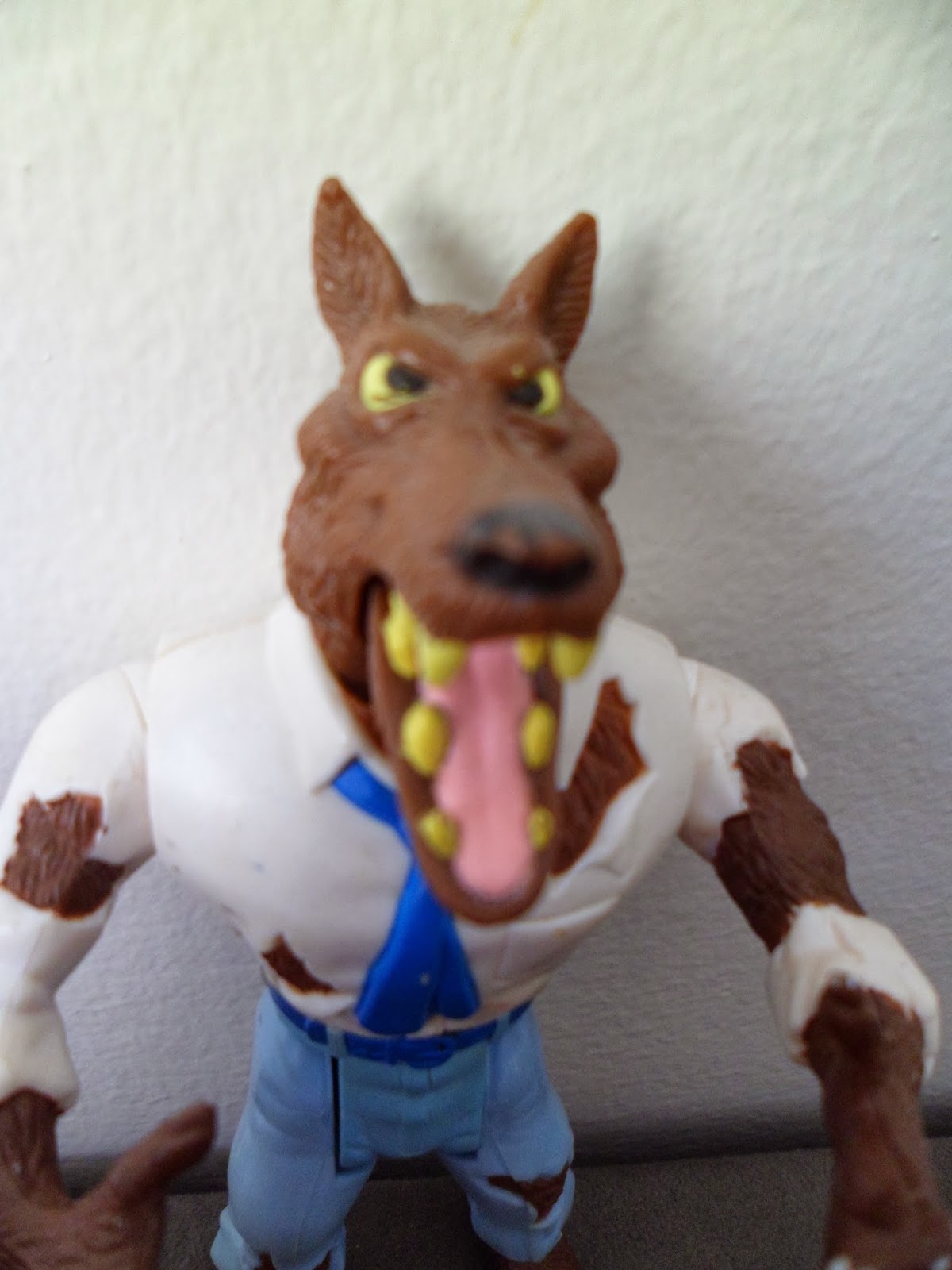 The Universal Monsters would eventually get much more accurate and faithful sculpts thanks to toy companies McFarlane Toys and Diamond Select. Both companies would do fantastic work, but we have yet to see a Wolfman that looks like he should be selling Happy Meals. But I have that someday we'll see one again. In the meantime, it's a fun figure to be on your shelf with the rest of your horror collection. I know I do. He actually looks pretty cool next to my Freddy figures.

Although he's constantly eyeballing one of those Food Fighters figures...that can't end well...