on September 11, 2013
The Halloween season has officially kicked off. Stores have already begun stocking their shelves with all kinds of orange and black coated goodies for the next two months. Of course the big news is the return of Yummy Mummy and Frute Brute to join their compadres of the Monster Cereals and it's kinda hard to beat that. Especially with the Target exclusive Flashback Packaging(replicating their original packing from the 70s) hitting stores and sending fans into a tizzy trying to complete a set of 5.

But I stopped into Target today to look for them and came up short. My heart was broken, but my spirit was not broken. Especially when I turned the corner and saw the beautiful sight of the Halloween section slowly being constructed. Now there wasn't a lot of stuff out. It's in it's infancy stage of construction. The candy is out as is the cake and cookie decorating stuff. I perused the selection and picked up a few items that caught my eye. 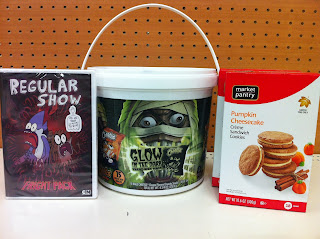 The Halloween edition of the Regular Show, two boxes of Pumpkin cheesecake cookies and a glow in the dark Cheetos bucket. Now, I know it's early on but I feel this may have been the best of the lot. The prize of the lot? The Regular Show dvd for obvious reasons and the pumpkin cheesecake cookies are a limited time treat you must sample. And while I could discuss how great it is to eat those cookies while  watching Rigby and Mordecai chase after the Greatest VHS In The World, I'd rather discuss the centerpiece in the photo above. 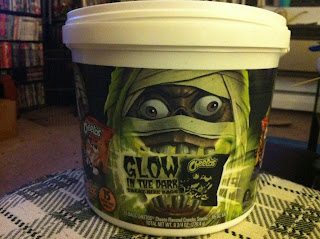 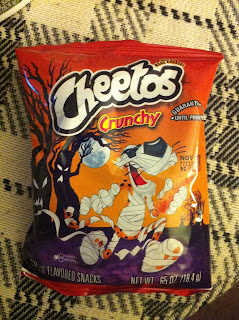 Yeah buddy! Check out that bucket! It feels more like an early 90s Frito Lay promo item. And while it looks like Eddie from Iron Maiden eating Cheetos and spewing Ecto Cooler out of his no doubt foul smelling mouth, I have to say it's very eye catching. Obviously companies roll out the "glow in the dark" gimmick around Halloween more than any other time and Frito Lay definitely made the right decision with this. Great image, great colors and a perfect choice of creature. While I can imagine Frankenstein looking cool eating the delicious cheese puffs, The mummy is a perfect choice.

And let's talk about that bag. Chester Cheetah looks so satisfied stealing Cheetos from those weird, walking trees. Perhaps the wrapping himself in toilet paper and running through the woods sniffing around for Cheetos was just too clever for those stupid trees. Look at how pissed off they appear to be! I'd be pissed to if an animated cheetah wrapped up like Lon Chaney outwitted me. Stupid trees. Don't get your hopes up for special Halloween shaped snacks, they're just your normal default Cheetos. At the same time, it wouldn't matter. The package deal of a glow in the dark bucket and the bags is well worth the 5 bucks you will no doubt drop.

Oh yes...I forgot to mention...THE BAGS GLOW IN THE DARK. 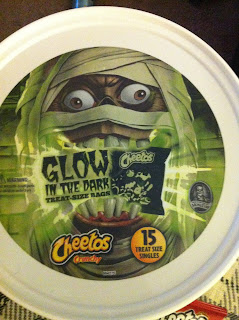 So The Halloween Cheeto Bucket is a pretty solid purchase. If you find yourself in Target, pick one up. It'll be a great centerpiece for any home decor this coming Halloween. Would you rather stare at a bunch of rotting flowers or the ultimate face of doom and deliciousness in the Mummy?