on May 27, 2013
I'd be lying if I said my writing wasn't influenced by Matt of the pop culture web site Dinosaur Dracula. In fact, I was reading his former page X-Entertainment on a daily experience in high school during it's initial debut. I have to believe that his site has to be the one of the funniest and most entertaining sites on the web regarding geek culture.

That said, back in 2006 Matt posted a post called "The Christmas Fallout", a yearly review of the gifts he'd receive for Christmas. In this years entry he received a throw pillow in the form of the head of Gizmo from Gremlins. When I saw all 42 inches of his pillowy-goodness, I knew I had to have it. At this point, I was planning for my move into my own apartment and decided that would be an awesome piece to have. Now, let it be known that I didn't move out of my mom's basement, but I said when I got my apartment I'd have Gizmo nestled up on my couch. Imagine walking into my living room and seeing Gizmo's head just resting on the couch as to say "Come in and rest your weary head on me while you sip an Arnold Palmer and watch Tales From the Crypt." Tell me it doesn't sound comforting!

So, last week, I finally succeeded in finding one. For only $22 and free shipping, I could finally make that promise come true. And finally... 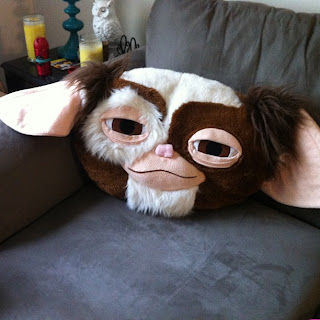 Tell me, that doesn't look cozy. A bit frightening at first, but Gizmo's warm embrace can't be explained with simple words. Imagine coming home from a long day of work and unwinding with your favorite star of Gremlins(besides Dick Miller that is.). Even my girlfriend Laurie loves him! otherwise, ya know, it would've ended up in the dumpster. But thankfully, that's not going to happen. At 42 inches long, Gizmo's sense of awesomeness is practically lifesize. I don't know how big he was in the movie, but I've gotta imagine a 42 ounce soda from the local movie theater towering over him.  Indeed, lugging this box up to my apartment was somewhat of a pain in the butt, but it was worth it.

The pillow itself is nothing more than a giant stuffed animal. The "how to care tag" was ripped off and but I'd imagine nothing but stuffing being inside. However, I don't want to sit here and try and examine it's contents. The package itself is what sells it. IT'S GIZMO. HIS HEAD IS THE PILLOW. That's the selling point. Looking at him, you know you want it. You don't just go into a store and say "hey, look! it's Gizmo's head! As a pillow! I'll pass!". Boulderdash. This is some serious stuff right here. It's so awesome, even my pet bunny Olive loves it. See? 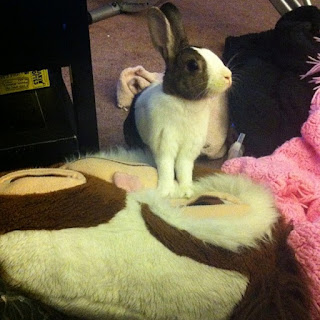 The colors, the design, the sleepy-eyed smirk. All trademarks of the mini-star of Gremlins are present and definitely send the point home. This is one accessory you must own. It's pretty hard to find. in fact it was pretty hard to find in 2006. It was pure luck I decided to search for it on eBay when I did. Great price for a great item, especially one I've been after for a while. I'm pretty happy with it, and the more Gremlins merchandise in my apartment, the better.

There you have it! Not much of a in depth entry about a pillow, but quite frankly, it's been something I've always wanted in my collection, as silly as it may seem. And now I have it and it looks oh-so awesome. Go find it if you can! 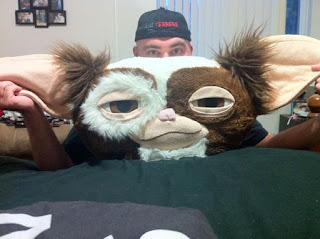