on July 31, 2011
In this wonderful and weird world of horror, we sure do have a lot of colorful characters. The hulking undead in hockey masks, butchers with chainsaws, candymen with hooks, cross-dressing freaks with mother issues. The list can go on for days upon days. And indeed they all deserve their place in a horror hall of fame. But none more deserving(at least int his writers mind) than the man I'm covering today.

By now it's no secret who my favorite icon of horror truly is. Frederick Charles Krueger, known to everyone and their grandmothers as Freddy Krueger. Brilliantly played by the extremely talented Robert Englund, Freddy was the brain child of Wes Craven in his opus "A Nightmare on Elm Street". Since 1984, Freddy Krueger has haunted our dreams and scared the pants off  us in 6 sequels, a crossover film with his rival Jason Voorhess, a remake in which Jackie Earle Haley donned the famous razor glove, a often forgotten tv spinoff and a slew of merchandising that would even make Gene Simmons question his sanity!

But think about Freddy's initial introduction and origin. A child killer in the town of Springwood, Ohio is  put on trial gets acquitted on a very tiny technicality. Obviously, as any parents would be, the parents of Springwood aren't too thrilled and form a posse to take down the man who they feel should be sent to the chair. So one night the parents of quiet and peaceful Elm Street decide to torch Freddy in his own domain, sealing his fate and doing what the police couldn't do.

That is until Freddy decided to come back and get the children of Elm Street where the parent's couldn't save them...in their DREAMS. A brilliant maneuver on Krueger's part. How could the parents get him now? How can their children stay safe? The answer is they can't! Brilliant! Of course, Freddy usually goes after the wrong person and gets fried at the end. But much to the FredHeads world wide, one form or another he always comes back!


Now a lot of facets of Freddy's legacy are well know. The famous red and green striped sweater for one. His burnt face that resembles a pizza is another. But what most of the general public knows about Freddy is his weapon of choice: 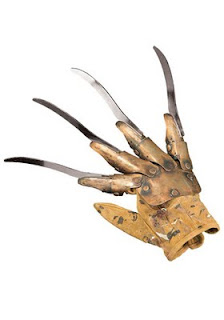 THE GLOVE. Of course. When Halloween comes around every single year,  you can expect two things: Jason Masks and Freddy Gloves. Perhaps the two most iconic images in horror of the last 30 years. Freddy's glove no doubt's capture your attention. And why not! It's extremely unique! And it just looks so creepy. I mean, just imagine a serial killer coming after you with this. You'd be terrified! The glove has almost become Freddy's image in and of itself: Unique, disturbing and oh so memorable. Can you imagine Freddy without the glove? That would be like Batman without Robin, The sun without the moon, peanut butter without jelly! It just seems right that a character of Freddy's uniqueness would possess such a memorable weapon. 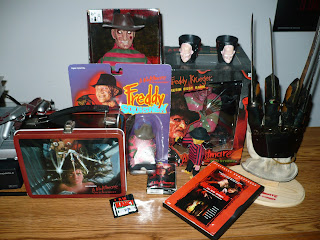 And boy oh boy, let's talk about the merchandising! Dolls, cards, comics, posters, lunchboxes, a 1-900 number and my absolute favorite piece, an ALBUM! Yes indeed. A real music record that features Freddy singing with the Elm Street Group and covering such hits as "All I have To Do Is Dream" and his own song entitled "Do The Freddy"!

Oh you don't believe me? Oh come on! Don't make me post the video.

Allright, you asked for it.

Told ya! This just proves how successful Freddy has become in American culture. He has became a staple of our society and in doing so the gloved wonder has found himself being accepted like none other. For some reason, Freddy has proven to the population that you can embrace and laugh at it. If we take away the fear, then it no longer has power over us. And if there's one thing the entire Nightmare on Elm Street series has made us learn, it's fear is only in our minds. And perhaps that's why Freddy has become our favorite slasher. Let's face it, if fear was a person, we'd all love to kick it's butt!

Freddy may have turned himself into a silly, wise-cracking, mascot of the 1980's slasher boom. But to me, since the late 80s when I first caught glimpse of ol' pizza face, he's been an icon of the past 30 years of horror. And I assume, with remakes and sequels and merchandising, I have to guess Freddy will be around for 30 more years.

And on another note: I have yet to find a Jason album at the local Best Buy. So that's Freddy-1 Jason-0.