A Trip To Camp Crystal Lake... 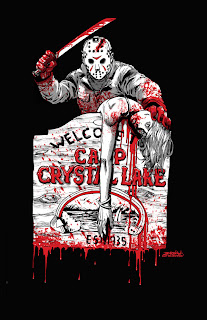 I went to camp for this past weekend. It's been a long wait, but I finally got there. Of course it's a journey I NEVER would have guessed I'd make. After all, what would I gain out of this? Of course being an adult summer camps aren't even a thought, and if they are then you're absolutely insane...

This summer camp was far different than any others. Ya see, June 3-5 was Monster Mania's Return to Camp Crystal Lake located in Hunt Valley, MD. Hunt Valley was previously the home for Horrorfind Weekend for years and years until Monster Mania invaded last September with their Nightmare on Elm Street 3 reunion.And that show was a blast and a half. But of course I'm a Fred-Head, so anytime Robert Englund is in town I'll be a bit biased. Camp Crystal Lake was different. VERY different. A few things stood out about this convention weekend. I'll get to those in a second but perhaps I should explain myself: I had no gain going into this convention. I've never been and most likely never WILL be a Friday the 13th fan. I can't stand the series and the series is up there with Scream as one of my least liked franchises. So why should I go? Well...Easy. I'm a horror fan and they did provide two big league guests that I needed to meet. And not to mention my girlfriend Laurie was selling her Knit-Terrors dolls(which you can get at http://www.knit-terrors.com. Sorry Phil. There's no way I couldn't. lol.) 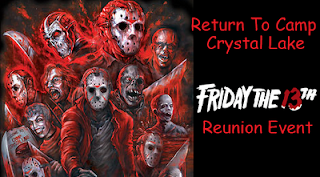 So as I said, the name of the convention was "Return to Camp Crystal Lake" which would celebrate all that is Friday the 13th. All the elements were that usually make a fantastic convention. The stars were there, great vendors, fun events including great Q&A's were scheduled and even VIP Party was Friday night for fans to mingle with the stars and dance to their favorite hits and have some tasty cake. While I didn't attend, I heard it was the best VIP Party. And one thing Monster Mania always prides itself on is pleasing the fans. Which, in my mind is the most important thing.  As long as the fans are happy, they'll keep coming back in droves. And Monster Mania has a fanbase so rabid, they'll follow Dave Hagan to the earth and back. Loyalty is something very rare these days, so for the past 8 years Dave Hagan has been doing something right.


For fans that weren't into the killing stylings of one Jason Voorhees, you were still covered. Horror icons Lance Henriksen and Angus "The Tall Man" Scrim were in attendance. The lines for these two were the most consistent for the two days I was there. In fact Laurie's biggest celebrity meet was to be Mr. Scrimm himself as she is herself a huge Phantasm fan, and she did not walk away upset. She even delivered a small token of her appreciation: A handmade Tall Man doll, that Mr. Scrimm adored. 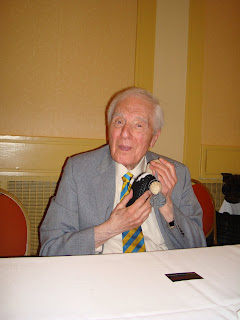 And my biggest want-to-meet for years, behind Robert Englund and Malcom McDowell, has been Lance. I've had many opportunities to meet him, but something always got in the way, much like Robert Englund as well. So as I stood in line waiting to meet him, I began shaking a little and became extremely star struck. He greeted me with a smile, a big handshake and after telling him what a huge fan I was, he gave me a huge hug and thanked me for being a fan. Lance was no doubt worth the wait to meet him. 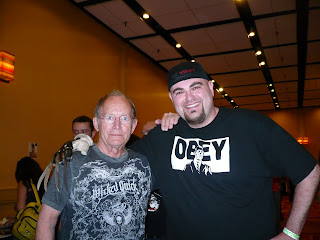 Now onto the Friday guests. As I stated before, I'm not a Friday Fan, but I'm sure with the great lineup of rare and first timer guests along with the occasional fan favorites sprinkled in, this convention would have been a real dream lineup. Many people from the series showed up including the creator himself, Mr. Sean S. Cunningham who was a real sport, even referring to me as "sir"(and in his words "when you're 6'6, it's "sir"), to which I responded "let me know if you need another Jason" followed by a shared laugh. And while I met very few guests, I must say the few I did seemed to be enjoying themselves very much. I didn't see a single guest having a bad time. A lot of guests hadn't seen each other in some time, so seeing them all catch up and having smiles on their faces as well made me feel pretty good. 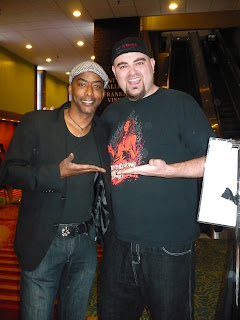 A high spot for me as well was when I got to tag along with the Fright Rags crew(if you haven't checked them out, head over to http://www.fright-rags.com. They are the best shirts in horror) along with Amy Steel and John Furey. Now just like my trip to a local Cherry Hill resturaunt with Joe Seeley and Lisa Wilcox, I got to know the people behind the characters. I always enjoy these moments. And at Monster Mania, it seems intimate moments with stars are always a guarantee. I enjoyed hearing stories from Mr. Furey and Miss Steel. A real pleasure.


So back to the lineup. The Jasons were all here. After all, you can't let the victims have all the fun can you? Not at all! A record 8 Jason's appeared this weekend. And while there were a few holdouts, no one seemed to be bothered. After all with all these Jason Voorhees in one room, it was a dream come true for diehard Crystal Lake-ers. I didn't hear any fans say a bad thing about any of their experiences meeting their favorite Jason and honestly, that makes me feel this wasn't a bad thing.

A few problems did arise. Mainly a competing convention not 4 hours away that split the fans in half. Saturday Nightmares was also scheduled in East Rutherford, NJ. Some fans may remember the same location being a long time home for Chiller Theatre, and in fact my very first horror convention, Chiller Theatre 2004, took place at this location. I heard many fans who arrived on Saturday said they just came from Saturday Nightmares and many on Saturday said they were actually going to Saturday Nightmares right after. It seemed that if you were in one spot, you weren't there for long as you were going to be in a hurry to get to the other show. By Saturday evening, most vendors were packing up their stock and ready to head out. I overheard one vendor say "no point wasting money on staying all weekend" as they taped up their boxes.

Personally, I have no problem with competition. But I feel that since there were two conventions int he same weekend within driving distance, maybe it hurt both shows. I've heard things about Saturday Nightmares but I'll leave it to Phil Fasso to fill in any rumors that may be flying around when he covers his experiences at the show.

Another problem may have been the theme of the show. Yes I realize Friday the 13th is one of the most popular horror franchises ever. Yes I realize this was trying to clean the mess John Gray started in Texas. Dave Hagan, as I've said before busts his butt...busts his butt to make a great show for fans of all ages to enjoy. Sadly, the single themed show and the fact that Saturday Nightmares was right up the road in New Jersey probably didn't help. I've always said, even if it's an Elm Street Themed convention, the novelty can't last all weekend and the magic is gone by the time all attendees get their guests. Attendance was not the greatest on Sunday. It seemed pretty bare. In fact I'm sure I would have been able to do cartwheels in the vendors and guests room. Be grateful I didn't.

Now, I personally enjoyed my visit to Camp Crystal Lake and give much props to Monster Mania for putting on this show. I think it was a great show, especially for those who love Friday the 13th. It was great to see a lot of fans with smiles on their faces as they got to meet their favorite stars, the stars themselves enjoying reminiscing with their former co-stars as they caught up and the laughter that could be heard in the hallways from the always enjoyable Q&A sessions. I have no doubt that Crystal Lake will always be remembered fondly by those who got to experience the fun. I was happy to be a part of the festivities and despite not being a fan, it was pretty inspiring to see a young 7 year old dress like Jason and chase people in the parking lot...kinda gives you hope that a franchise like this will live on forever doesn't it?

And allow me to close on this note: after this weekend I must say I was impressed. Very impressed with how everyone was enjoying themselves. So much in fact I may have to take a trip to Best Buy and give Jason another chance...