Monster Mania is a very popular convention in Cherry Hill, NJ, and has for many years. And since it's inception in 2003, it has grown to be one of the most popular conventions in the country. I've known fans from Australia and England to come over once or twice a year to visit the mega-show! And the rabid fans of the show usually are the real stars. Monster Mania's fanbase is very loyal to the convention and always enthused to hear the latest rumors and guest lineups. The fans definitely make the show a lot of fun and very memorable. It's one of the very few conventions where I've made true friends. In fact Saturday morning was spent with my "gore mentor" and a very great human being Mr. Phil Fasso at Old Country Buffet. And it was quite a pleasure to spend breakfast discussing conventions and the fandom.

So let's hit the Monster Mania review, shall we! My experience at this show was a little different than my previous trips. For this show, I helped my girlfriend Laurie vend her Knit Terrors dolls and goods( http://www.knit-terrors.com) for most of the weekend. So if I wasn't at the table, then I was running around the hotel like a headless. I didn't get to check out as many events as I usually do, but for good reason. This was the first convention Laurie and I would attend as a couple. We met, ironically AT Monster Mania in Hunt Valley in September 2010 and since then, we've been in a very loving relationship.

But, as I said, Monster Mania is very popular. How popular? So popular that it was able to score the first time signing appearance of one Nick Castle, the producer of Halloween and the original Michael Myers. And Ace Frehley from some band I'm sure you've never heard of. This Monster Mania showcased a rather different guest lineup. It varied from horror stars to a rock star to science fiction tv stars from the 60s. It was a rather eclectic crowd, but seemed to really draw in the fans. The big money was on Nick Castle being the big money draw for the weekend to die hard fans. And indeed he was a big deal to most fans who were very excited to meet the one man who played Michael Myers who eluded them for years. Now, personally I am NOT a huge Halloween fan as others are, but I could still understand his relevancy. With the exception of Jamie Lee Curtis, this is the biggest name of the legendary Halloween legacy. This was a big deal that drew Halloween fans from all over, and they did not leave unhappy. Nick was a great guy and was very warm and receptive to everyone stopping by to offer their gratitude or just to say hello. I'm sure I speak for everyone when I say I hope this isn't his last show. 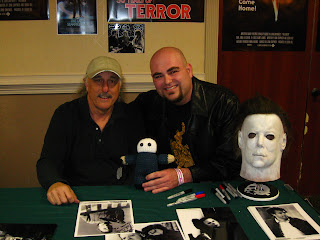 Ace Frehley's legacy will speak for itself. With a price of $30 for an autograph, $30 for a photo with him and charging $500 to sign a guitar(no that doesn't include a guitar HE provides. That price would be for him to sign YOUR guitar), I can probably guarantee he won't be showing up to any future shows.

The rest of the guest rooms seemed pretty good. All the guests seemed happy to be there and having a lot of fun. It's always great to talk to first time guests and get their opinion. Such was the case with Mr. Ricky Dean Logan from Back to the Future 2 and 3 and Freddy's Dead who said he was enjoying himself. And he certainly always had a smile on his face every time I saw him! As I stated earlier, I didn't get to do my share of events but that's quite alright. Another fun aspect of Monster Mania is it's "party atmosphere". It seems everywhere you go at anytime there is a party going on. It's pretty nice actually, because everyone has the same goal: To enjoy their weekend the best they can. So when an infamous group called "The 509's" decide to have a few of their favorite drinks and watch a few awful movies and riff on it the entire time, you know you're in the right place for fun.

The dealers room in Monster Mania is another attraction. In it you can find many great treasures that you probably won't find anywhere else. Rare dvds, posters, action figures, artwork and off the wall memorabilia. You just never know what you'll find walking around that room. I once picked up two Elm Street "street signs" from the late 80s, "Bloody New Year" dvd and Fright Flix trading cards. It's always amazing to see the outstanding wares brought in by the great vendors. And recently it was announced the vendors room will be expanding, so you KNOW I'll be on the prowl for some goodies!

While I wasn't active in the convention as I have been in the past, I must confess this was a pretty good show. The attendance didn't seem as big as the last few shows. I do believe because of the diverse guests who seemed more like a lineup for regular memorabilia show, some fans were alienated by the sci-fi guests and unusual additions of a rock star. But that's ok. Not everyone can be pleased. Some people made this the very first Monster Mania they attended and were not dissatisfied. Some long time fans WERE dissatisfied by the initial lineup and the lack of it being an "all horror show". Some compared it to "another horror convention in New Jersey" and ultimately anyone who attended took something from the show. Good or bad, it's they're choice. Not everyone can be pleased. Me? I criticized the show early on, but was proven wrong very quickly.

At the end of the weekend the show was a success and a ripping good time! My personal favorite Monster Mania to date...Now I have to prepare for my next trip(s): Saturday Nightmares in East Rutherford, NJ and Monster Mania 18: Return to Crystal Lake in Hunt Valley featuring an homage to Friday the 13th! Guests at Saturday Nightmares include Tippi Heddren, Sid Haig and much much more. Guests at Monster Mania include Sean S. Cunnigham,  Lance Henricksen, Richard Brooker and many more. It's going to be a great weekend that I'm looking forward to. Let's hope I don't pass out of exhaustion!!!

You can get more details about Monster Mania at http://www.monstermania.net. Saturday Nightmares can be seen at: http://www.saturdaynightmares.com

In my next blog entry, I'll be counting down my top 7(yep! Lucky number 7!) horror movies that didn't catch on. Also known as the "Top 7 Awful Horror Movies" list. Everyone always has a list like this, and I love awful horror movies. Hope you'll join me!