on February 13, 2011
In the world of horror, you have many such a vast variety of films to pick from. Slashers, psychological thrillers, supernatural themed horror. The list goes on and on. But what if you wish to have as many themed horror genres crammed into an hour and a half? Well, sir! I have just the pick(or picks) for you! The horror anthology film! 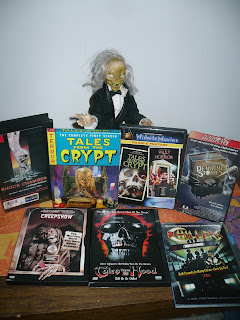 Seen above with that rascal the Crypt Keeper are a few selections from my personal collection. We have(from left to right) Shock Chamber, the first season of Tales From the Crypt tv series, the double dvd set of the Amicus produced Tales From the Crypt and Vault of Horror, Deadtime Stories. On the ground are (left to right) Creepshow, Tales From the Hood and Chillers. While this entry is on anthology FILMS, The Crypt Keeper demanded "HIS" television series be included. Actors can be a burden to work with sometimes.

But enough of him, let's move on. Anthology films will usually entail 3 or 5 stories which may or may not interlock within each other. The central theme will be included in the story line sometimes.  Creepshow, my personal favorite, used five stories that seemed to come directly out of an EC Comic book of the 50s which, in those days usually meant that the villain of the story would find his comeuppance in an ironic or personal demise involving his flaws as a human. In Creepshow, the stories revolve around the main antagonists and their flaws. And by the end of the segments, they all met their demise in very comic-book like fashion. A true hallmark of the old EC Comics. Creepshow is a true classic and stands the test of time and is truly my pick for the greatest anthology film of all time.

Another favorite of mine is the cult classic Tales From the Hood which was released by HBO Films in 1995 and directed by Rusty Cundieff and stars many fine stars of the genre including Clarence Williams III, Wings Hauser, Corbin Bernsen, and even from Creepshow 2 Tom Wright among so many others who make this pick a great time. The movie twists the old EC Comics formula and takes it a step further with gritty stories from the confines of a funeral home and tells the story of four short stories that are based around an African American view of horror. Many central themes are drugs, racism, gangs and many other central themes. This movie was originally looked over as a "in the hood" movie which were rather popular at the time, but this movie stands on it's own. It was released by HBO Home Video in 1998, but sadly currently out of print. However, if you find it on Ebay or Amazon on dvd, it is worth a spot in your movie collection and gets one of my highest recommendations.This movie in my mind got it right. It's visually striking, can be humorous at times, and has 4 exciting stories and fantastic acting. While the movie wasn't isn't as popular as Creepshow, I personally feel it was a good pick. 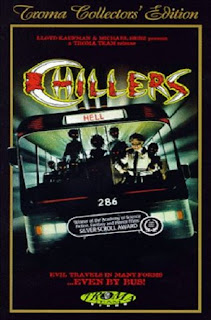 Sometimes, you'll have a lot of silliness and dullness to the point that the movie is unwatchable to a small degree. In 1987 Troma films tried their hand at the anthology film with "Chillers". To be fair Troma IS not known for their serious side but more known for their wacky and slapstick side. Not to say Troma did not produce their share of classics(an entry in the future will discuss more), but this particular pick is a little on the...odd side. In Chillers, 5 strangers are stranded at a backwoods bus station and divulge of their recent dreams and how they "seemed so real". We the viewer get to relive those dreams as the strangers re-tell them. The problem with this particular movie(and many other low budget anthology films) is it starts off somewhat promising and even interesting with the story of a girl who falls for a swimmer, who she then realizes has been deceased. Fair enough, we then go into the favorite amongst fans of the film(and yes there are fans of this selection), the store of three boys who travel with their scout-master only to discover a unique secret about him. Then things start to slow down in the last three stories which involve satanism, an evil Spanish creature, and the power to bring people back from the dead. The problem with this film isn't really the stories. It's the visual style. This movie comes off very flat and dull. It goes from interesting to "yawn" within the span of 30 minutes. However, the first two segments are very fun to watch, especially with the performance of Scoutmaster Bob(also known as "WOLF!") who may be the shining star of the film.

Anthology films are a favorite of mine. Perhaps due to me watching Creepshow at such a young age. Anthologies are a great way for a horror fan to have more "boo" for your buck. If your a fan of horror and want a little variety in your viewing pleasure, these are the perfect way to go. And in the span of over 20 years of watching horror, I've come across many good and bad anthology films. But then again in horror movies, we wouldn't have it any other way...