Dig All Of Those Obscure Faves Out Of That "Shallow Grave"!

on December 09, 2010
Hello everyone! Hope the season is treating you well. This cold weather sure is a lot to handle, huh? Yeah, the next thing you know it will be snowing and we all know what that means...we'll be locked in our homes with nothing to do! But I've got a great solution how to kill time... 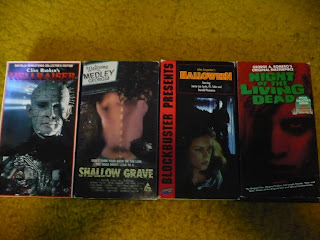 ...A movie marathon! yep! Grab some classics and spend the day nestled in bed while watching some great horror!

Wait a minute! Something's off! There's something that doesn't belong in that photo. Hellraiser is a classic, Night of the Living Dead is no doubt a groundbreaker and Halloween is the one that many proclaim started the slasher genre. But what's that other one? Shallow Grave?!?! No, not the UK film starring Ewan McGregor and Christopher Eccelston. This is about four college girls heading to spring break and encounter a police officer killing a woman. Insanity ensues and the girls are killed one by one.It's essentially you're normal "backwoods officer gone wrong" movie from the mid 80s.

Well, maybe it doesn't belong in the "Classics" genre, but it should belong in a collection! Why, you ask? Allow me to explain! Shallow Grave is one of those great forgotten low(very low at that) budget features that were only made because the company needed to throw some cash around for a weekend in Idaho. We've all seen them. These are the movies that would be found in the "pre-viewed movies for a dollar" rack of those mom and pop stores that go out of business. These movies aren't hits or cult classics. In fact the common movie fan would rather dip their hand in a tank filled with rabid wolverines than watch these movies. They are the movies that your crazy best friend would go in the back yard and try to film with a knockoff Jason mask while running around throwing sticks at his sister, all the while proclaiming to his dog the thought that he will be the next Dario Argento. These are the movies that only the bravest can stomach. But after watching true classics like Saw and Hostel, I think you can take on the mission of watching movies like Shallow Grave.

Of course, there are better examples than Shallow Grave. I could list off hundreds upon hundreds of movies worst than Shallow Grave, but I won't. I'm just trying to drive a point home. Horror fans are very loyal to the genre. They don't take themselves too seriously and these movies are a testament to that. Most, if not ALL horror fans have a special place in their hearts for these crummy movies. Myself included. I have a collection of horror on vhs that is 75 percent garbage! And why not? Sometimes the good horror movies are a little too intense, that at times we need to get a god laugh. And why not go with a crummy classic on vhs! I suppose these films would be the equivalent to watching one of those "sports bloopers" tapes. So...here's a small example of a few of horrors low budget "bloopers". 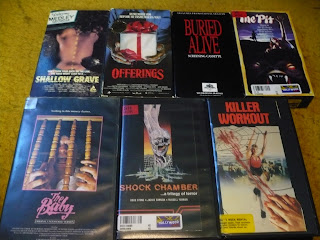 Above is just a tiny selection of my vhs collection. These films are some good examples of that obscure low budget crap that you can find easily at a Goodwill, video store closing sale, flea market or even eBay. The movies I selected are not considered great moments in cinema, but they are highly entertaining(maybe for the wrong reasons too). Some of the time you will encounter a good low budget film that was released as an afterthought but thrown in the shuffle of "ehhh...no one famous is in it and it looks like crap" by fans. The Pit and The Baby(Seen above) are two examples of that. Sometimes you will encounter those rare gems. They usually will take you by surprise, and most likely you will fall in love with them. Many of your fellow horror fans most likely share love for the same silly shlock that you do. It's the fun in the cheesiness in these movies that make it so enjoyable. Even the packaging screams "buy me!". Look at the cover for Shock Chamber. The cover is indeed  a great attention grabber and makes you question what's on the tape you're about to watch. Sadly, that is not one of the best examples of an "enjoyable" low budget film.

Forgotten vhs have become a treasured collectible to horror fans. These movies have essentially run their course by the time they were unwrapped the first time. Even if they were only watched for 20 minutes(that's usually the test for most fans. If you can get through 20 minutes and not want to bang your head on your desk, than it's a safe bet you'll get through the rest of the movie.) these movies served their purpose. Most of these movies will find their way to the Goodwill and snatched up by someone like me who does have a deep love for them. Many of my friends have stacks and stacks and stacks of these on their video shelf, sometimes exclusively as bragging rights. The biggest crime of these, sometimes depending on the film, are that they will never see a release on dvd or blu-ray. Maybe a few will be released on a triple feature budget dvd and you'd be able to find it at Big Lots. Years ago, Anchor Bay released a slew of shlock in their fantastic "Drive In Double Features". You could find them at Kmart and Best Buy. They were all movies that normally wouldn't have a chance anywhere else on the dvd shelf. Here's a prime example: 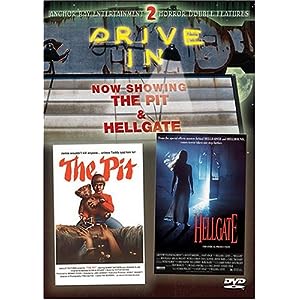 The Pit matched up with Hellgate! Yep, thar she blows! Two great obscure hits for the price of one. How can you go wrong? It's a true shame that Anchor Bay stopped releasing these. Currently, one quick look on Amazon.com, you'll find these garner higher prices than their vhs counterparts! So, until you can find these gems on dvd or blu-ray for a lower price, I'd go for the beat up copy of The Pit on vhs for a few bucks.

Troma Films specializes in making low budget movies, and have been for the past 35 years. But the difference is, they know what they're doing. Would you pick up a copy of Toxic Avenger and say "Wow. I bet this sucks!"? Yes! But that's the point of it. Too see the humor in the silliness. They know what horror fans want and they know that we don't take ourselves seriously. We won't shlock! And lot's of it! Another perfect example is Mystery Science Theater 3000. They take movies that are shlock and tear them apart. I also know many people who turn these into party games trying to parrot what they heard on MST3K.

Another fun in these movies are sometimes discovering those big-name actors in their first roles. Sure we've all seen and loved Marissa Tomei in My Cousin Vinny and the Wrestler...but did you know that she had a role in the first Toxic Avenger(of course that scene ended up on the cutting room floor, but can be seen on the dvd release). The spirit of these movies live on to this day. Ever go to Best Buy with 15 bucks burning a hole in your pocket and need a quick fix? How many of those direct to dvd features catch your eye? Those are essentially the same movies, except with features and probably a bigger budget.


So, if you have a dollar and have the need to watch something different, head over to the Goodwill or Salvation Army or even a flea market and maybe you'll find something. Who knows...maybe it will be a "classic"!

On another note: In my last entry I made the error of listing my first Chiller Theatre as "May 2004" when in fact it was April 2004. Thank you to my Phil for pointing that out. And the photos have been replaced as well.
bargains dvds low budget shlock vhs