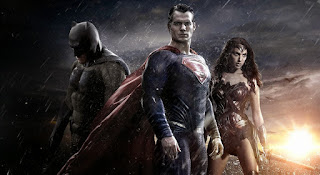 So I just got out of Batman vs Superman...

As I've explained many times in this blog, I'm a lifelong DC Comics/Batman/Wonder Woman/JLA fan. It's just the way it's been. I've been excited for Batman vs Superman since it got announced 3 years ago. And I've been hearing about how terrible this movie was going to be from nearly everyone. Was it going to fail? It could. Was it going to be great? It could. All I knew is I was excited to see two of my favorite heroes on the big screen, after all this time. For the past years, my excitement has grown and grown and blossomed into a full blown fanboy-boner.

And ya know what? It's exactly what I was hoping it would be. And more. It was exciting, emotional, action packed, even a little humor here and there. Everything was a perfect blend. Nothing too overbearing. Still a little over the top and some intense stuff, but it's a comic book movie, what do you expect?

Now, DC Comics have always been darker and this movie was more mature than anything they've done previously. You can include any live action, animated movie or tv show in that. Yes. You heard me

Allright, let's begin shall we...

-Ok, the whole "Adding too many superheroes" thing?

Let's just begin with this. That needs to end. When you see how the other heroes (Cyborg/Flash/Aquaman) are introduced, you're going to be very happy. There's no way this isn't being done right.

I'm gonna get a lot of hate for this, but sorry,  is the best Batman since Keaton. And an even better Bruce Wayne. Even better than Christian Bale. He shows a more heroic side, a more

This is the Wonder Woman we've been waiting for. Seriously badass. She nails it in the first time you see her appear as Wonder Woman.

He has a lot more to work with this time around and proves he can be Superman. Blows MOS out of the water. He's much more of a aware of who he is as a hero and what he can truly do.

It was good, I liked it better than the Bat-Tumbler. It was a combination of every Batmobile we've seen and it looks pretty well.

The way she acted and looked, she was playing Pam Halpert. Amy Adams is someone I enjoy, but I just didn't like her in the previous movie. She's much better in this one though.

When you see it, you'll get it.

-Jesse Eisenberg is NOT Lex Luthor.
I can't say I was thrilled with him in this. Jesse Eisenberg is a good actor and can ham it up at times in this but he's playing the Riddler or the Mad Hatter. If we had gotten someone else playing Lex, I would've said we have a candidate for the Riddler. Just bad casting in this case.

-Doomsday looked more like Killer Croc as he evolved.

Along with Lex Luthor's odd casting, this is my biggest complaint. I thought the look was ok  at best. But his brute strength and recklessness reflected Doosmday well.

All in all, this movie erases any bad taste MOS may have left in your mouth. I implore any and all comic fans to see this. This was amazing and the new gold standard of superhero movies. This has been the DC Comics movie I've been waiting my whole life to see. If you're a huge fan of comics, you owe it to yourself. Endless references and homages to the DC Universe that will keep you happy.

Be prepared, because if this movie is any indication, the DCU is going to be a real fun series to see unfold! Bring on the next one!