I've been doing all sorts of conventions since 1994. Comics, wrestling, toys, and yes...even anime. Now, as much as I hated it, my best friend managed to drag me to those anime shows on what seemed like a monthly basis. My anime days, while they are way behind me, took up a good chunk of my life and I don't suggest anyone to suffer through those. In the tail end of my anime days, a few friends and I formed a fan group named "The Lou World Order", which obviously was a reference to the popular wrestling group "The nWo" and at the same time a tribute to the head of Filmation, Lou Scheimer. We were different from the others. We didn't follow the same rules. We didn't act the same as everybody else. We didn't dress like morons and run down the halls screaming "squeeeee!". No, we did what we wanted, where we wanted. Eventually, we got burnt out on crappy anime and decided to move on and call the end of an era in 2005.

But before we moved on entirely, we took a break in 2004 to attend the world famous "Chiller Theatre". Chiller Theatre is a world-renowned horror show that now seems to focus exclusively on big names and stars from 60s and 70s. It's been about 5 years now since I've attended a Chiller show, but I have a lot of friends who tell me "oh yeah, it sucks" or "it's unorganized and extremely expensive".


To be fair as much as I do talk smack about Chiller, it does hold a soft spot for me. After all, the April 2004 show was my first step into the world of horror conventions. And I've never closed that door either. I was so elated to see people enjoying themselves and having fun. I was so used to seeing people at those anime shows acting so elitist and snobby. But horror fans, seemed to welcome each other and wanted to have fun as they shared stories of their favorite horror movies and such. I immediately knew which path to follow. I had to do everything I could to be a part of this scene. And over the span of a few years I did. It took a while, and I had to take breaks, but I got there. And to celebrate my new blog, I thought I would go back in my old "LWO Archives" and dig out the report I once wrote. Keep in mind back then I payed zero attention to how I wrote, or spelled and that it WAS written in 2004, not 2010. I tried to clean it up the best I could, but for the most part it is crap. Enjoy this flashback to 2004!

CHILLER THEATRE> EAST RUTHERFORD, NEW JERSEY> APRIL 23-25 2004>
Friday:
After getting off work, I head over to Ryan's humble abode, where we pass the time by watching glorious Filmation. I also recieve an original Battle Armor Skeletor MOC from 1983!!! This con starts out well enough. So we head out at 6:00 and after having the worst Roy Rogers burger ever, we leave in the soaking rain and get to the hotel about 12 midnight. So we get in and get ready for our biggest con ever...But, before we find a....White Castle. yes. so happy.
Saturday:
I wake up pretty early, which is weird, considering I usually need about 10 hours of sleep. Ryan gets up at his usual "Wake me up in fifteen minutes, which drags out for 3 hours untill we go. We register 2 hours later at 12 noon. We start some stuff with Mad Max Guy, who must be a Chiller Theatre regular, cuz, I didn't know who he was. So, after registering, we head up to the dealers room, which is waaaay more insane than something like Ohayocon. They had a plethora of fantastic items, including bootleg dvds(NOW IN 2010 KNOWN AS "GREY MARKET DVDS"), great selection of unique action figures and poster and of course: COMICS, COMICS, COMICS!!!
Anyway, We finally get ourselves into the celebrity tent. I'm standing close to the beginning of the line, when all of a sudden, The Icon himself Rowdy Roddy Piper comes out. I scream "RODDY YOU ROCK!!!!" and he waves back with his signature hand motion. We head back to the room, where I get on my Jim Morrison shirt, which is basically the only shirt I ever wear at cons, much like Ryan and his Buffy shirt. We come back and the line is snaked all the way over into a good 1/2 mile, from my standpoint. Probably not though, it was long. So, Ryan decided to go and wait the line out, which was a bigger mistake. It just got longer. We talked to a lot of great people. Bummed some smokes.
After that we finally headed back to the tent, where Ryan and I get very excited to meet our favorite celebrities. We get into the tent an hour and a half later, and finally meet the one, the only...the ICON!


The Icon in our life, the Hot Rod, Rowdy...RODDY...PIPER!!!
We talked about Billy Blanks, our hatred for Hogan, and presented him as the Lou World Order World Heavyweight Champion of the Galaxy...He may have not been nWo, but he sure was LWO...I got him to sign a promo picture, a video cassette case, and I bought a Hot Rod! shirt, I've wanted since I was a little kid. 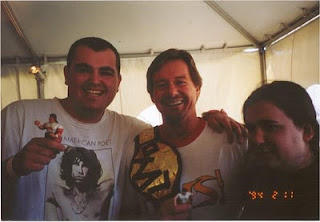 So then we wandered over to the biggest line...the Batman cast line. First we met Adam West. His assitant kept messign with Frank Gorshin and Haji. It was funny to watch...But back to Adam...We asked him what his favorite Simpson line was and he said "Pure West". I did it for him, and he had a good laugh. I got him to sign a picture for Andrew (Ronuss) and myself. 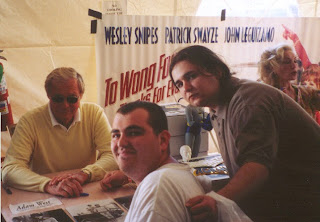 Next, we met Julie Newmar, who was probably the bets looking woman at the whole con. Which I find very funny. Ryan asked her to sign his "My Living Doll" video tape which she was very flattered to sign. I got her to sign two pics, one of Catwoman and a modeling shot from the 60's where she's sporting fishnets! Eat your heart out Zatanna! 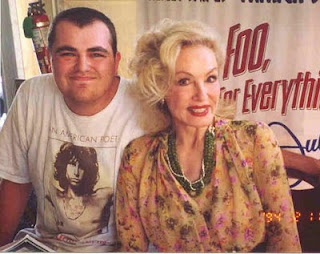 Next up, the Riddler himself, Frank Gorshin. We we're hoping to get him to do a Paul Lynde impression to counter Ryan's. He told us that his throat was hurting. I told Frank Ryan does a killer Paul Lynde, and he encouraged Ryan to do it! He failed and Frank just laughed. I got him to sign one photo. 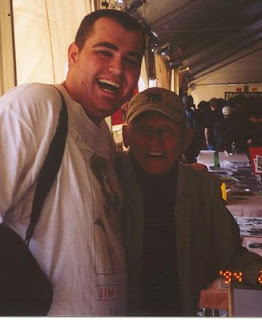 After Ryan embarrassed himself and disgraced pual Lynde, we met Richard Hatch from TV's Battlestar Galactica. Ryan and him had a great conversation, and Richard complimented Ryan. "Your a guy that thinks, and I appreciate that". And he really dug my Jim Morrison shirt, which rocked! He was a great guy to talk to about tv and a guy that really loves his fans. Ryan purchased 1 photo 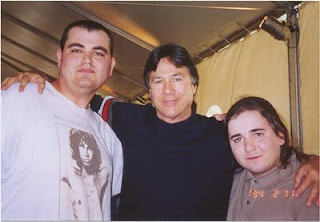 Our last celebrity encounter was our most dissapointed. Lou Ferrigno was only interested in signing and getting his money. I waved to him earlier, and he said hi, but when it came time to meet him, I'm sure he was really tired, so I'll give him the benefit of the doubt.
So after walking around for three hours in the tent, we head out for a smoke. Ryan goes into his bed and I go up to the dealer room. I go into a different one, thank goodness, and find G.I. JOES!!!! HOO-RAH! I buy a Crimson Guard and a Fridge that I can finally play with and keep the other one in the mail-in bag. I run back to the hotel and tell Ryan about my find, and that they had DVD's and he buys the Best of She-Ra and I buy a Crimson Guard Python Patrol. I registered my alliance with the Horror Channel. Before we left the con finally, I went to the Troma room, and got my picture taken with Team Troma and Toxie!!! I would've liked to meeet Lloyd Kaufman, though. 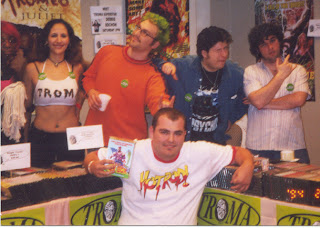 After that, we were off to WHITE CASTLE. We got lost in the worst part of Jersey, and we headed back to our room. At 10:10 We went to go see the movie Ladykillers, starring Tom Hanks, which was funny, the only issue was I fell asleep in the theatre and snored for about 5 minutes, untill Ryan woke me up. We headed back at 12:00 midnight and went to sleep.
Sunday:
I really don't think I can qualify Sunday as a con expierence, because we really only registered for Saturday. We bid fairwell, and headed back to Maryland.


Ok, so not so bad, eh? We pretty much lived it up for our first horror show. Ryan would later throw that She-Ra dvd out by the way. According to him it was "Horrendous quality. It's like someone took a crap on a dvd". Well, either way it was a terrific time. Maybe 2011 will see my return to Chiller. I've been wanting to go for the past few years but something always stops me. In the meantime Monster Mania is the true horror show. In my mind at least. Is there another horror show that YOU love? What are your most fond experiences? Feel free to share and post them here!
Grilled By Horror Movie BBQ Delivered At 6:25 PM